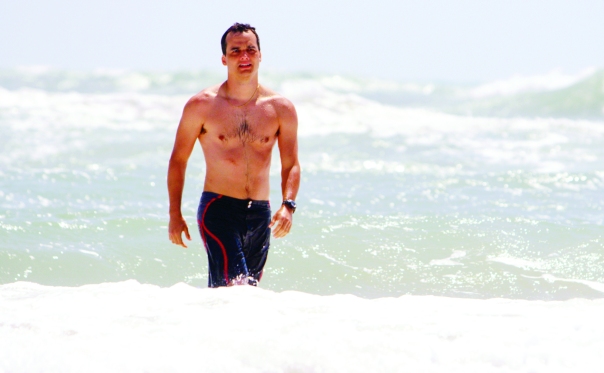 Regular Mostly Film readers will be aware of the occasional, ongoing series Monoglot Movie Club  written by Spank The Monkey when he’s trotting around the globe. He goes to see local films and despite having no knowledge of the language the films are being spoken in, manages to put together intelligent and coherent reviews of the films in question.

I love reading his articles but am always a bit baffled about how he has any idea what’s going on.  How on earth does he decipher the plot? Words are fairly crucial to the cinema-enjoying experience, no? Otherwise how would you have any idea whether the two characters sitting in a cafe are talking about local politics or balloon modelling or kinky sex positions? (Or combinations thereof?)

I have revised my opinion slightly after watching Brazilian director Karim Ainouz’s Futuro Beach. I had the benefit of subtitles throughout, but you know, I could have probably understood it just as well without.  Because while there is certainly some dialogue taking place between all the moody scenery shots, none of the characters ever really say anything that’s pertinent to what’s happening in their lives. The audience has to piece together the storytelling largely through brooding looks, uncomfortable silences and some roughly intense sex scenes. Which clearly work well in any language.

The focus of the film is Donato (Wagner Moura), a lifeguard at Futuro Beach in Fortaleza, Brazil who  comes to the rescue of two drowning German tourists. He manages to save one but not the other who is washed out to sea. Donato’s guilt at his failure to save the man is overwhelming. “He was the first person I’ve lost,” he tells his colleague.

Donato visits the surviving swimmer, Konrad, in hospital in order to inform him of his friend’s death and to offer his apologies. Konrad accepts the offer of a lift back to his hotel. This immediately segues into a scene of the pair of them having sweaty, vigorous sex in Donato’s work vehicle. Well, that was quick. Maybe it’s a guilt thing. Or a grief thing. Or a two good-looking gay guys wanting to have sex with one another thing. As with much of the film, nothing much is explained.

Although we do learn from their post-coital chat, that Heiko, Konrad’s companion was not his lover, but his friend. And that Heiko’s death has left his wife widowed and his small son fatherless.

Donato and Konrad’s relationship clearly goes deeper than a bit of sweaty intimacy in the back seat of a car. Donato provides support to Konrad in dealing with the legal issues of  his friend’s death. Konrad meets Donato’s little brother, ten year old Ayrton (Sávio Ygor Ramos) who is suitably impressed with Konrad’s cool-looking motorbike. The relationship between Donato and Ayrton is touchingly portrayed and the two brothers demonstrate a close relationship. Ayrton calls his brother “Aquaman” because he’s clearly the only kid ever to think that Aquaman is cool. The brothers hang about together on Futuro Beach but Ayrton, who is scared of the sea, refuses to go into the water. “I wish I could find you a beach with no sea” says Donato.

When it’s time for Konrad to return home to Germany, he asks Donato to come back with him. Donato considers the proposition by broodily staring at the sea for a long, long time. He does a lot of staring off into the distance in this film. Wagner Moura has a very broody physique – all broad shoulders and wide legged stance.

Although originally determined to return home at some point, when the time comes Donato cannot bring himself to leave. He seems committed to his new life in a new country – walking around with a soppy lovestruck smile on his face, learning the language (well enough to buy cigarettes at any rate) and attending sports events of Konrad’s dead friend’s son. Although this evidently hard for him as he still feels responsible for Heiko’s death. More brooding ensues.

But mostly Donato seems to be happy with his decision. We get a nice glimpse of domestic life between Donato and Konrad. They seem to be well-matched despite their apparent differences. There’s a  scene where they’re sitting at the dining room table – Konrad’s chair inexplicably (but significantly) much higher than Donato’s – eating food from opposite ends of the culinary spectrum – Donato’s plate is heaped up with something fried while Konrad tidily eats a much more delicate portion of something.  They’re a good-looking couple. Donato looks like a cross between Vince Vaughan and Ant from Ant ‘n’ Dec. Konrad looks like the third Chuckle Brother. If there were a third Chuckle Brother who was actually rather attractive.

Although clearly things didn’t work out for the two of them because the next time we see them, ten years after the drowning on Futuro Beach, they are no longer a couple. It is not explained why or when this happened. It’s just one of the many things left unexplained in this film.

The final Act of the film deals with Donato’s past catching up with him. Specifically his younger brother, Ayrton, last seen as a tousle haired hero-worshipping ten year old, now a sullen eighteen year old with attitude and anger issues. Grown-up Ayrton is played by Jesuita Barbosa.

His anger, it turns out, is well justified and the manner of Donato’s departure from Brazil a decade before is something that the two brothers need to deal with. Despite no longer being with Donato, Konrad helps to deal with his brother. In an echo of a scene at the beginning of the film when 10 year old Ayrton sat on Konrad’s motorbike making “Vroom vroom” noises, eighteen year-old Ayrton steals Konrad’s motorbike and buggers off to go clubbing. Ayrton seems desperate to prove his heterosexuality and hooks up with an agreeably pretty girl called Dakota. Earlier Ayrton had accused his brother of “Taking it up the ass here in North Pole” so it seems safe to assume that he is not entirely comfortable with Donato’s sexuality. Or his decision to live in the Northern Hemisphere, come to think of it.

The film uses a mix of German and Portuguese dialogue. Given that I was reading the English subtitles, I wasn’t necessarily aware of which language was being spoken at any one time unless it was explicitly referred. I would pay more attention if I watched this film again because it seems significant. In Fortaleza, all conversations  took place in Portuguese but as the couple adjust to their lives in Germany, they begin to move away from Donato’s mother tongue and speak the language of Konrad’s homeland. When Ayrton arrives on the scene, Konrad questions him about his speaking German. “So I could speak to my brother,” Ayrton tells him. “I thought he’d forgotten Portuguese. You know how he forgets things.” Language is both a bridge and a barrier between the three men.

Although things seem to be nominally resolved by the end of the film, complete with platitudinous voiceover by Donato, it did feel as though nothing really happened between the opening and closing credit. And while ‘nothing really happening’ is perfectly fine in a movie, in this case it was really rather boring.

It looked beautiful. Sweeping shots of the beautiful Brazilian coastline and it’s slightly shabby villages, the gloomy drizzly streets of Hamburg. It’s lovely to look at. It just didn’t seem to go anywhere. Well it went from Brazil to Germany and stayed there. But, aside from both Konrad and Donato’s ability to grow some impressive facial hair, it’s not clear how any of the characters grow in the course of the film. Or whether they do at all.

I’m sure if Spank The Monkey had reviewed this film after watching in Portuguese (or German with Portuguese subtitles), he would probably have come up with a more coherent interpretation of the main plots and themes contained therein. Although he would have missed the dollop of wisdom delivered by the German barmaid: “Everything will be fine when the future arrives.” You know, I’m pretty sure that isn’t always the case.

I am, however, a bit baffled by  one reviewer on IMDB who said:  “I left soon after the first big blow job. Nymphomania this is not.” What on earth were they expecting? Definitely don’t go expecting that.