As Electric Boogaloo opens in UK cinemas, Spank The Monkey looks at Mark Hartley’s trilogy of documentaries exploring the underside of cinema history. 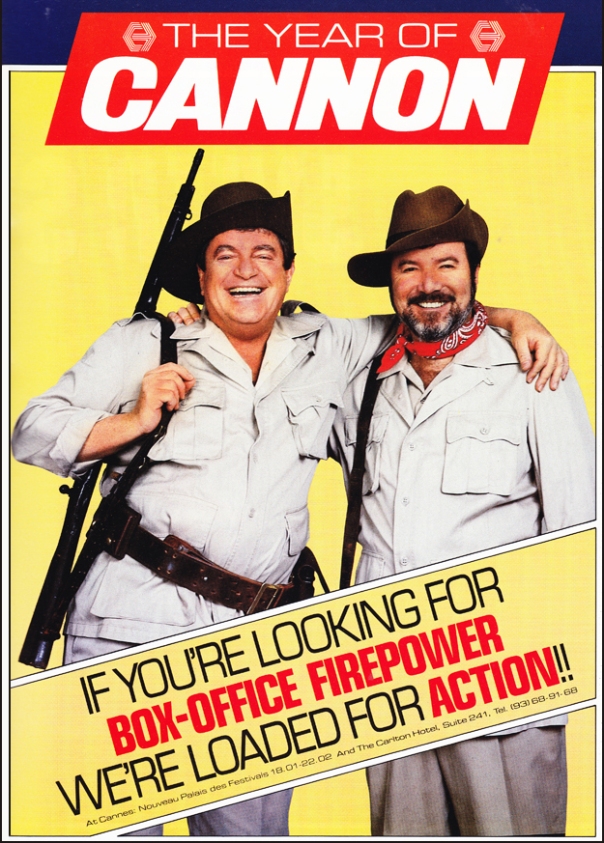 How do people give themselves an education in film nowadays? All the avenues that were open to me when I was growing up are being closed off one by one. Repertory cinemas are lying derelict: uncommercial movies are being swept out of mainstream telly slots and onto niche channels. At one point in recent history, you could have argued that video rental shops would provide sustenance for a new generation of movie buffs – well, it did, but they ended up being the wrong sort of movie buffs. The sort who would drop names like Boaz Davidson, Sam Firstenberg and Albert Pyun, and expect you to know who the hell they were talking about.

Mark Hartley’s almost certainly one of those people. Over the last decade, he’s made a trilogy of documentaries looking at the films of – in turn – a continent, a country and a studio, each with a reputation for lowest common denominator moviemaking. Watch all three films back to back, and there’s a visible formula at work: soundbites from key players, interwoven with tightly-edited montages of clips from the movies being discussed (and climaxing with a montage of montages just before the end titles roll). But it’s a strong formula, and it allows us to compare and contrast three subgenres of exploitation cinema in ways that wouldn’t otherwise be possible.

Hartley’s 2008 debut focussed on his homeland of Australia. Not Quite Hollywood: The Wild, Untold Story Of Ozploitation had an interesting premise: without the cheapjack exploiters of the early 1970s, Australia wouldn’t have a film industry at all. At the beginning of that decade, Aussie filmmaking was limited to the movies made by visiting outsiders like Nicolas Roeg and Michael Powell. The tacky sex comedies, Ocker grossouts and biker thrillers that followed them into local cinemas created a new generation of talent, one which eventually went on to make the likes of Picnic At Hanging Rock. But while its arty dramas gathered international acclaim, the country never stopped finding new ways to deliver cheap thrills, from the currently zeitgeisty Mad Max to the more traditional low-budget fun of Brian Trenchard-Smith.

Hartley followed this up two years later with Machete Maidens Unleashed: the only documentary of his to date without a subtitle, though an opening crawl proudly proclaims it to be ‘the wild, untold story of the Filipino exploitation explosion!’ In narrative terms, it’s like a mirror image of Not Quite Hollywood. There was already a thriving local film industry in the Philippines, but it received international attention when Roger Corman set up production there. With a constant supply of nubile actresses, reckless stuntmen, and as much military support as their bribery budget would allow, American International could churn out their jungle warfare and women in prison flicks in the most profitable fashion possible.

None of this had any major impact on the local film industry, though, except perhaps on one actor: the two-foot-nine action star Weng Weng. His films – notably the Bond spoof For Y’ur Height Only – have been a queasy staple of bad movie nights for three decades now. Machete Maidens Unleashed actually started life as a Weng Weng biography: the producers hired Andrew Leavold to make a film about the actor, but then passed his research on to Hartley to make a more general study of the nation’s film industry. Leavold’s own film, The Search For Weng Weng, eventually came out in 2014 and has been generally well received, picking up an audience award at the Terracotta Festival. But it’s fun to see how one idea for a movie can split into two rival productions – because it’s a scenario that crops up no fewer than three times in Hartley’s latest movie.

Electric Boogaloo: The Wild, Untold Story Of Cannon Films tells the story of two of the most notorious movie moguls of the 1980s: Menahem Golan and Yoram Globus. They were a well-matched pair, with Golan acting as the creative partner while Globus was the money man. They’d had a few successes in their native Israel in the late seventies, but their teen sex comedy Lemon Popsicle unexpectedly became a global hit. They bought a near defunct movie company, Cannon Group, and drew up a plan to make movies that the whole world would want to watch. Hubris is a big part of their story, and this was just their first example of it.

On the surface, this would seem to be a tale of exploitation moviemakers similar to Hartley’s predecessors. But there’s a big tonal difference here. The Australian and Filipino documentaries are full of affection for their subjects, and have to go out of their way to find a balancing negative viewpoint: a pair of contrarian critics provide it in the former, while the latter film is enlivened by disgruntled actors wondering out loud which out of Ferdinand Marcos and Roger Corman has the worse human rights record. But overall, the interviewees have fond memories of their time in the industry. This is not the case with people who worked for Cannon: Electric Boogaloo is crammed with former employees delighted to tell you that Golan and Globus made nothing but shit.

That’s not entirely true, though. After all, they were willing to give the likes of John Cassevetes money to make films, at a time when nobody else would. They took an unproduced Kurosawa screenplay and made an astonishingly underrated action film out of it, Andrei Konchalovsky’s Runaway Train. And Franco Zeffirelli insists to this day, based on their production of his Otello, that they were the best producers he ever worked with. Even in the exploitation field they were most notorious for, Golan and Globus sometimes hit paydirt simply by throwing multiple genres into a blender to see what colour they came out. When you do that in a non-metaphorical context, the answer is usually ‘brown’, which should be a warning. But Hartley highlights two Cannon productions where this approach worked beautifully: Tobe Hooper’s nudie space vampire apocalypser Lifeforce, and the Ninja/Exorcist/Flashdance hybrid of previously celebrated Obscure Gem Ninja III: The Domination.

But most of the time, you knew what you were getting with a Cannon film: usually violent action doled out by someone called Chuck (either Bronson or Norris, the closest thing to a roster of stars that they had). And if they’d stuck with that formula, they could have survived much longer. Unfortunately, that wasn’t enough for them. The climax of Electric Boogaloo shows Cannon hurling all their cash into three films which they were convinced would propel them into the big league. One of these was Sylvester Stallone’s arm wrestling movie Over The Top, and that was probably doomed from the start. The other two, though – a live-action Masters Of The Universe, and the fourth Christopher Reeve Superman film – had the potential to be solid commercial hits. But they weren’t.

Writer Stephen Tolkin comes up with the best explanation why: he believes that the Go-Go Boys “loved cinema in the abstract… I don’t think, in my experience, that they really knew what it was like to love something so much that you were patient and took the time and went through the pain of seeing it through draft after draft after draft and admitting to yourself that it might not be right yet.” But towards the end, he also suggests that Golan and Globus could never win, because of the sheer snobbery the rest of the industry felt towards them. And maybe that’s true. You can’t pin it all on anti-Semitism – not even when even the Israeli filmmakers brought over to Hollywood by Golan can’t resist Jewing it up when telling anecdotes about him. But they were certainly outsiders, never fitting into the Hollywood system. And maybe that’s good enough reason to celebrate them.

Electric Boogaloo isn’t quite as entertaining as the previous films in Hartley’s trilogy. Maybe the story’s too familiar, especially for a British audience – to us, Cannon aren’t just a film studio, they’re the company who ran the UK’s most flea-ridden cinemas for a decade. The other two documentaries introduce us to films we haven’t seen before: this one shows us clips of films we already know, and tries to explain how the hell they got made in the first place. Nevertheless, if you get to the end of Electric Boogaloo without wanting to watch, say, Lifeforce again, then you’re made of stronger stuff than I am.

Electric Boogaloo is released in UK cinemas on June 5th. Machete Maidens Unleashed is available on iTunes, and Not Quite Hollywood can be obtained on DVD from Metrodome.