Tod Browning’s 1932 classic has been digitally restored and is in UK cinemas on Friday. Indy Datta drinks from the loving cup. 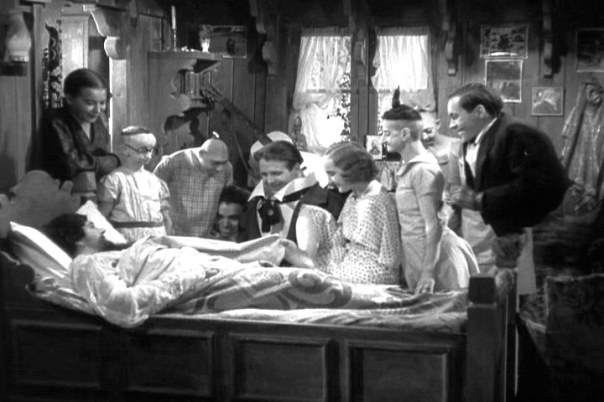 Although it has, for most of its life been a cult item (if not quite a film manqué, despite various attempts to suppress it), Freaks was greenlit as a mainstream studio film by MGM, the studio most associated by the public with the glamour of the studio system’s early years. Browning was coming off a major critical and box office success with Univeral’s Dracula, and MGM, after offering him the director’s chair on an adaptation of the Arsène Lupin stories, agreed instead to fund his long cherished adaptation of the story Spurs, by Tod Robbins.

The key change is that, in the story, the dwarf has no friends among his fellow circus performers. Robbins’s own screenplay (presumably on the instructions of Browning, who himself had travelled with circuses and carnivals, and whose earlier Lon Chaney vehicle The Unknown had trod somewhat similar narrative ground) gives the protagonist Hans (Harry Earles) a spurned dwarf-sized love interest (Harry’s sister, Daisy Earles) and a network of supportive colleagues, most of whom were played by celebrated real circus freaks of the time – Siamese twins, bearded ladies, pinheads, and hermaphrodites (as they are referred to in the film) .

In Browning’s film, the vengeance wreaked upon the wicked woman (Cleopatra the trapeze artist, played by Olga Baclanova) is not meted out by Hans alone, but by all the freaks together, after Cleopatra humiliates not just Hans but all of them, by rejecting their gesture of acceptance and fellowship at the wedding ceremony.

It is arguably hard for the modern viewer to see the singing of the freaks as anything other than joyful and their offer of acceptance as other than genuine, particularly in the context of the film to this point, which has taken pains to show their everyday life and to portray it as, to an extent, ordinary, while still inflected by the various disabilities on display. The bumpy romances of the the conjoined twins played by Daisy and Violet Hilton are no more exploitatively or salaciously presented than in the Farrelly Brothers’ 2003 film Stuck on You (which, for the benefit of sceptics, is not at all). The representation of the childlike microcephalic “pinheads” played by Elvira and Jennie Lee Snow, and Schlitzie surely incites no feelings other than compassion.

But during the film’s production, most of the freaks were barred from dining at the MGM commissary, lest they put other diners off their food. A preview of a 90 minute cut of the film so horrified contemporary sensibilities and the censors that the studio demanded the film be cut and substantially reshot – the release version was a mere 64 minutes long.  And on release, although some reviews gave Browning’s film its due as an efficiently nasty little whatnot, many other reviews were despairing, disgusted, uncomprehending. In an unedifying passage now excised from their official text, Variety noted that the story “does not thrill and at the same time does not please, since it is impossible for the normal man or woman to sympathize with the aspiring midget.” What the actual fuck? Freaks was banned in Britain, partly on the basis that it exploited the disabled people it claimed to dignify. The BBFC’s response is far from unthinkable now:  it is perennially a typical establishment-academic-philistine  response to any lowbrow art that dares to transgress commonly held taste barriers that such transgressions are insufficiently sophisticated, that neither the artists nor the audience can be trusted, in this instance, to know the difference between a freakshow and a story about a freakshow. The extent to which the latter may and/or must incorporate the former is beyond the scope of this piece: I get to have my cake and freak it.

MGM took their name off the film and took it out of circulation, all but ending the film careers of Browning and most of his cast. Later the film was, according to one secondary source, leased from MGM by an exploitation producer who toured it under various unsavoury aliases and later attempted to relaunch it as a legitimate release. The same source claims that the film was later purchased from MGM by Anton LaVey, the founder of the Church of Satan. If this isn’t true, it should be.

Now, after 30 years of obscurity and 50 as a counterculture touchstone, Browning’s film finally looks respectable. While it would be wrong to subscribe to the fallacy that all cultural change is progress, it’s hard not to draw some satisfaction from that fact.