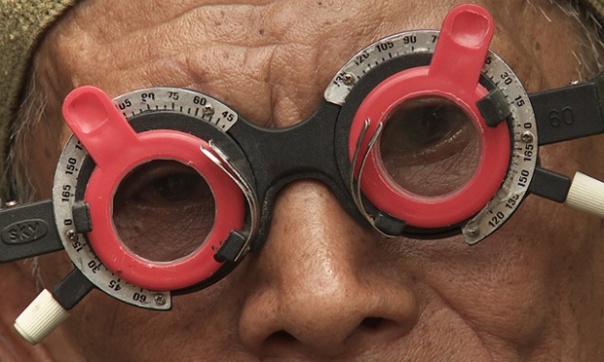 Last week, I attended the Sheffield Documentary Festival (aka DocFest or Doc/Fest) for the first time. I’ve been going to the Edinburgh Film Festival for 15 years, but have somehow never managed to do Sheffield before, despite huge amounts of praise for the festival from fellow film journalists. Sadly, I could only be there for a short time this year, but here’s a quick run-down of my three days at Doc/Fest.

As I got off the train at Sheffield, I was delighted to discover that the entire set-up – key venues, press centre, delegate hang-out etc – was just a stone’s throw from the station, not least because I knew I’d be cutting it fine running from the end of a film to my last train home at some point. I collected my pass and a festival bag that puts other festival bags to shame and then joined the frankly enormous queue to pick up opening night tickets.

The Look of Silence

The opening night film was The Look of Silence (out in cinemas now), Joshua Oppenheimer’s follow-up and companion piece to The Act of Killing, in which Indonesian optometrist Adi confronts some of the men who killed his older brother during the Indonesian genocide. For the most part, the men tell their horrific stories with pride, but Adi’s questioning clearly rattles them and each interview is fraught with heart-break and a creeping sense of danger, since the government behind the genocide are still effectively in power. Further emotional devastation comes in the depiction of Adi’s elderly mother and father, the latter suffering from dementia that means he’s unable to escape his memories and fear of the genocide. The film has many powerful scenes, though one of the most disturbing moments occurs during a sequence shot at Adi’s son’s school, where you realise children are being indoctrinated to believe that the genocide was a good thing because all the “Communists” they killed were evil. Oppenheimer and Adi were both present for a highly emotional Q&A after the film, with Adi’s voice breaking and wavering throughout.

Determined to make the most of my only full day at the festival, I arrived at 9am, since the ticket request system requires you to queue up at one of the desks in the press centre.

My first film of the day ended up being my favourite doc of the entire festival. Filmed over five years, it’s a powerfully emotional story about a music teacher in Paraguay who decides to give free lessons to impoverished children from a community based near an enormous, sprawling landfill. Nobody can afford instruments, so the teacher works with a rubbish picker and the pair of them make all the instruments from the garbage they find in the landfill. As well as being an extraordinary inspirational teacher movie (one of my favourite genres), the film is also a testament to the power of YouTube and Facebook, with the latter leading to a bizarre collaboration with Megadeth (thanks to a female band member’s obsession with them) and the former bringing the group to worldwide attention as the Recycled Orchestra.  Alongside the Megadeth twist, the film takes another unexpected turn towards the end, but I won’t spoil that here. I was gutted I missed the second screening of the film, because the orchestra were scheduled to make an appearance for that one. Anyway, I sat next to a distributor who seemed very interested in acquiring the film, so hopefully it’ll get a theatrical release at some point.

My second film of the day was Addicted to Sheep, an observational documentary from director Magali Pettier, about a sheep-farming family in the North Pennines. It was beautifully shot, the family are extremely likeable and you come away feeling like you’ve learned everything there is to learn about sheep-farming, but there came a point where it needed some sort of story or direction and that never materialised. One of the digressions in the film featured some charming sequences shot at a rural school where the children are all from farming families and that seemed to have rich potential for a future film. The director and family were all present for a Q&A afterwards, accompanied by a life-size soft toy sheep.

The Black Panthers: Vanguard of the Revolution

Next up was director Stanley Nelson’s comprehensive history of the Black Panther Party in the US, from their formation in the 1960s during the civil rights movement to their eventual dissolution in the 1980s. The film is told through a series of talking head interviews with many former Panthers, accompanied by a wealth of archive footage culled from personal collections and official news sources. Overall, it’s a fascinating, impressively mounted doc that has powerful resonance with current events in the US, something that came home especially strongly during the Q&A with Nelson afterwards. It has a great soundtrack too.

The Hunting Ground is director Kirby Dick’s follow-up to The Invisible War, which explored the ever-increasing incidents of violent sexual assault within the U.S. Military. The Hunting Ground explores the same issue, but on US university campuses, uncovering a shocking pattern of cover-up and silence, with the universities often protecting or refusing to punish the rapists (particularly if they are star athletes), even if they’re actually convicted. The film unfolds in much the same way as The Invisible War, with a series of emotional talking head interviews with women out-lining their experiences, as well as interviews with whichever campus officials agreed to appear on camera. The film is less strong on exploring the causes behind the issue or examining the culture of entitlement, but it does have a note of hope that was painfully absent from The Invisible War, in that it follows two young women who come together and form a protest group that begins to have genuine, life-changing impact.

Orion: The Man Who Would Be King

My fifth and final film of the day was director Jeanie Finlay’s follow-up to The Great Hip-Hop Hoax, telling another strange music-related story. The film details the life and career of singer Jimmy Ellis, an Alabama teenager in the 1960s whose singing voice bore an extraordinary resemblance to that of Elvis Presley, so much so that his own singing career foundered because of the similarity. However, after Elvis’s death in 1977, Jimmy found new fame as a masked singer called Orion, developing a huge following amongst Elvis fans who refused to believe the King was dead. Told through talking head interviews and archive footage, the film is a fascinatingly complex exploration of identity, with Ellis both embracing and playing up to the similarity (he released a record called I’m Not Trying To Be Like Elvis), yet also troubled by it and desperate to establish his own career. It also paints a vivid picture of the money-grabbing nature of the music industry, with even the concept of Orion himself being stolen from the author who came up with the idea and brought it to Ellis. As well as being a moving story in its own right, the film is packed with colourful anecdotes, and there’s one late-arriving moment in particular that will leave your jaw hanging open in disbelief.

As a special treat, after the Q&A, Finlay brought on a masked Elvis impersonator who did performed three songs. Brilliantly, when I met him in the bar afterwards, he turned out to be a full-blown cockney.

Orion was preceded by Luchadora, an entertaining short by River Finlay about a female Mexican wrestler. I spoke to her about it afterwards, hoping to persuade her to turn it into a full-length feature.

I only had time for two films today, but they were both blinding.

First up was Mavis! – a hugely enjoyable doc about the life and career of gospel singer Mavis Staples, who’s 75 and still touring. Full of life and good humour, Mavis emerges as a veritable force of nature, whether she’s performing on stage or giggling while confessing to “smooching” with Bob Dylan in the talking heads sections. My favourite line came after a concert appearance, where she exclaimed, “That was the most fun I’ve had since I got my new knees!” The film also serves as an insightful portrait of the civil rights era with Mavis and The Staple Singers writing and performing the first gospel protest song, Why (Am I Treated So Bad)?

My final film was Robert Gordon and Morgan Neville’s co-directed account of the televised debates between liberal Gore Vidal and rightwing William F. Buckley Jr during the 1968 Republican and Democratic conventions, a series of confrontations that began a lifelong feud between the two men. I was completely unfamiliar with the story and I haven’t yet seen Gore Vidal: The United States of Amnesia, so I found it utterly riveting. I was also unaware of Buckley’s famous outburst, when Vidal’s furious button-pushing finally pushes him over the edge, so that moment was genuinely shocking. The film paints a colourful picture of the cultural and televisual landscape in 1968 and Gordon and Neville pretty much lay the blame for today’s confrontational news style in the US (basically people shouting at each other on Fox News) at the feet of the Buckley / Vidal debates.

I had an hour or so to kill before my train home, so I wandered over to the outdoor screening area, known as the Howard Street Screen and sat in one of the deckchairs. I was really impressed with both the quality of the screen (especially considering the bright sunshine) and the sound, though the film itself was pretty awful, a New Age-y doc claiming to “explore our cosmic origins and our future as a species” that put me in mind of 2004’s What The Bleep Do We Know?  I’d spotted the word “cosmic” in the programme blurb and had made a mental note to avoid it based on that alone, so it was quite pleasing to have my suspicions confirmed so comprehensively. Always avoid any film described as cosmic, that’s my advice. At any rate, it got so bad that I left in case anyone thought I was watching it out of choice. Gorgeous weather though.

My general impressions were that Sheffield Doc/Fest is a relaxed, well-organised and friendly festival, with everyone eager to share their love of documentaries and their various discoveries with fellow festival-goers. I was also really impressed with the number and quality of the various Q&As – every film I went to had one and I think they were doing them with multiple screenings, i.e. if a film played twice, both screenings would have Q&As. As for star attendance, I spotted Alex Winter (Bill, of Bill and Ted fame) sitting alone in the Showroom bar area (he was there for his film Deep Web, which I really wanted to see), but I had a train to catch, so I didn’t manage to speak to him. He wasn’t the only star though, oh no – I also spotted Tricky Dicky from Eastenders, so that was exciting. My one regret was that I didn’t get a chance to attend any of Sheffield’s legendary parties, so I definitely want to come back next year.