Deadpan surrealism, brutality and featureless tracts of dull countryside. It can only be the new film from Bruno Dumont, released in the UK on Friday. Yasmeen Khan is your guide. 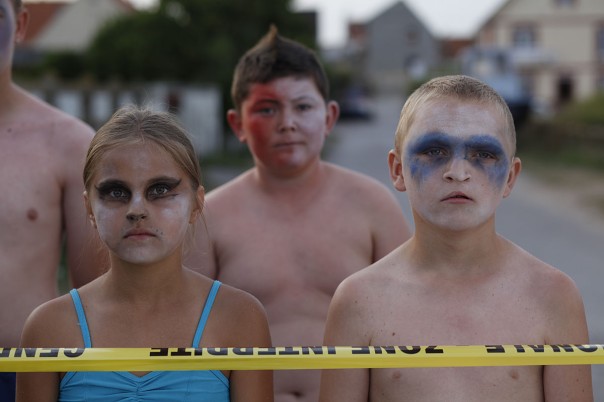 Bruno Dumont might be a genius. He’s certainly made some brilliant films, beginning in the late ‘90s with the brutal and beautiful La vie de Jésus (1997) and L’humanité (1999), continuing with the devastating Flandres in 2006, Hadewijch in 2009, and, most recently, the intensely moving Camille Claudel 1915 (2013). Indeed, perhaps the fact that his only real dud, 2003’s execrable Twentynine Palms, is so irredeemably awful is just another marker of Dumont’s genius. It’s brutal and uncompromising, like the rest of his films, but it fails, partly at least, because it’s set in the desert, thousands of miles away from his usual territory of northern France. Dumont is from the area around Calais, and Picardie and Flanders are essential to his artistry; he portrays the region and its people with a unique sensibility, and it seems as if he relies on them for the integrity of his storytelling. His unflinching gaze takes in society’s problems, poverty and racism and violence and mental illness, and something like identification makes it work in this setting.

So it’s good to know that P’tit Quinquin is set in Picardie, and that its dialogue is in Picard, a regional language that shares a lot of similarities with French, but is quite distinguishable from it. And it’s about a police investigation, something which Dumont also used in L’humanité; crime, punishment and mystery are all Dumont’s territory, and we should be in safe hands. But the crucial difference is one of form. Although P’tit Quinquin is being released as a cinema feature, and Dumont claims to have conceived of it as a single film, it was originally intended to be cut up into a set of episodes, first six and then four (chapter headings now show where the divisions were). The feeling of serialisation and the rhythms of episodic, longer-form storytelling are still there, and it’s also, obviously, been a chance for Dumont to mix style and genre and try out some variations in tone. Actually, watching P’tit Quinquin can be frustrating. It feels a lot longer than 200 minutes, thanks to some particularly interminable and annoying segments, and it’s difficult not to wonder if the experience wouldn’t be immensely enhanced by leaving a day or a week between chapters.

A police procedural drama, traditionally, follows strict codes and conventions. It offers a window on a community, an excuse for the cameras to document the relationships and peculiarities of a place and its people, using the stress of a crime as a catalyst for upheaval, and the investigation as a light to shine upon all the secrets this upheaval reveals. Almost as traditional, by now, is the undermining of these conventions, and P’tit Quinquin is nothing if not subversive. A dead cow is discovered inside an old World War II bunker. The cow’s body, it turns out, contains the chopped up remains of a local woman (minus her head). Police captain van der Weyden (Bernard Pruvost) and his sidekick Carpentier (Philippe Jore) begin an investigation, somewhat half-heartedly; a bunch of local kids including Quinquin (Alane Delhaye) and his girlfriend Eve (Lucy Caron) witness the removal of the body, and start to follow the investigation and generally make nuisances of themselves all round. It’s a glimpse into a community, certainly, and this is a weird, closed-off world with secrets and charms that suck you in, like it or not. Bodies on beaches and small-town secrets abound here, but this is no Broadchurch in Picardie.

Part of the subversive nature of P’tit Quinquin lies in its odd mix of tones. Dour surrealism and slapstick comedy sit next to Dumont’s trademark tragic combination of bleak landscapes and enraged youth. The past sits with the present – the bunker and the Bastille Day parade, for example. There’s room for farcical, ridiculous funeral scenes and a deeply serious and shocking look at racism. The children are savage, the local farmers are bizarre, and the cops are clowns, a grotesque and depressing double act. Van der Weyden is a collection of mournful pronouncements and facial tics, and Carpentier wears the mask of a grinning fool. How the murders happen and why doesn’t really seem to be an urgent question; the cops look on, muttering ‘bordel’ and ‘incroyable’, but they’re more perplexed by the existential questions raised than the forensic. They talk about Émile Zola’s La bête humaine and being at ‘the heart of evil’, they decide that ‘the Devil incarnate’ committed the crimes; but otherwise they just kind of shrug. ‘On y va.’ Events unfold around them, and their job is not so much to clarify them, or solve anything, but to remark on the deepening mystery, to act like a kind of Greek chorus and record what’s happening without being able to influence it.

By contrast with the detectives, Quinquin and his gang of children are serious, cruel, disaffected, violent. Equally as grotesque in their way, though. They are like stereotypes – “bored youth in social realist film” – pointlessly riding bikes around countryside as flat as their lives, going home from time to time so their parents can yell at them. And Quinquin acts like a kind of youthful mirror to van der Weyden, who tells him more than once, without a hint of awareness, that he would have loved the country childhood Quinquin is experiencing. But there’s a disconnect in the way the film shows him to us. Like van der Weyden, we have no real way into the reality of Quinquin’s experience. Are his casual violence and vandalism symptomatic of his society, or is this just what he’s like? Are his parents useless or pitiable or harsh? What should we make of his bizarre grandparents? Or his uncle, who has disabilities?

Should we feel sorry for these kids, or find their situation tragic, or realistic, or depressing or amusing, or are all of these reactions patronising irrelevancies?

On one level, the film simply shows us Quinquin’s life as it is, and he’s very much deliberately a cipher; the reason he does pointless, obnoxious things that adults can’t understand is because he’s a child. Adults aren’t ever going to be able to penetrate that wall of deliberate vacuity. They’re not supposed to. On another level, though, Quinquin is the heart of the film, and for one reason – his love for the calm and beatific Eve. Once every episode, they embrace and say they love each other. It should be corny and manipulative, but in fact it’s redemptive. It actually works. It’s one of the few ‘real’ elements in the film, unclouded by irony or surrealism or the irrational. One other example is an unusually direct confrontation with a capital-I Issue – the disgusting racism spouted by some of the young characters is a portrayal of something that you don’t see exposed in all its ugliness all that often, for all that racism is a common theme. But that, too, goes against the aesthetic grain of the rest of the film.

And that’s the thing. These elements exist, but they’re not the main substance of the film, and P’tit Quinquin will stand or fall depending on how much you buy into the irrationality, and the surrealism and the irony. They’re what it’s about, and if you aren’t invested in them, it won’t matter how much you can see through them to any redemptive heart. Take the portrayal of people with disabilities and learning difficulties. They are by no means mocked, but the contexts in which we see them are more puzzling, leave more room for variation in mood. They’re surreal elements, not real ones. And this is the bulk of the film, this is why grotesquerie feels like the main aesthetic driving force. Even while there are parts where the farce or comedy of embarrassment is stretched pretty thin; it’s deliberately the most challenging and provocative element.

The traditional policier is an upholder of law and order; the mystery is always solved. the crime is always punished, the forces of rationality are upheld. It’s a deeply, deeply conservative genre. P’tit Quinquin is not really like this at all. It’s deliberately stultifying, defying the established forms of the crime thriller. Dumont, here, is bringing the irrational back to the genre, and for a good reason. He says, “What I’m really interested in is getting as close as possible to the mysterious, but I don’t want to follow the paths of mystery as a genre. I like to find metaphors or analogies that evoke the mysterious. By definition, a police investigation is quite a mysterious path…Many criminal investigations are mysterious, we don’t actually know what happened. It’s interesting not to know, to be stumped, because it’s an analogy for the quest for truth, which I consider equally vain.”