Gareth Negus reviews Amy Schumer’s breakthrough movie. Was it a Super Advance First Class or… no, you’re right, that’s not going to work at all. Sorry. 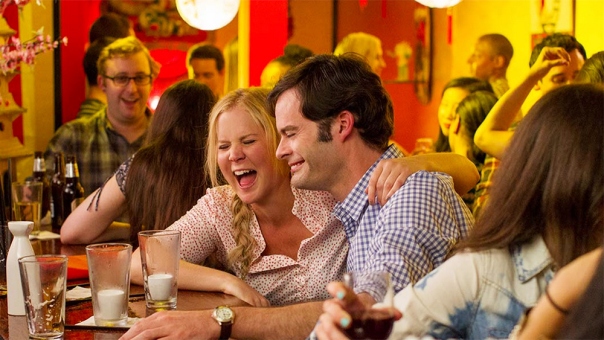 Trainwreck is billed on the poster as being ‘From the guy who brought you Bridesmaids‘.  I’m not sure which guy they’re referring to, as the two films have a couple of producers in common, but it’s probably Judd Apatow, who also directs. It might have been more accurate to say ‘From the director of Knocked Up and This is 40‘, but presumably someone felt that the target audience wouldn’t respond to that strapline as enthusiastically.  It does have quite a bit in common with Apatow’s past work as a director, in that it’s intermittently very funny but suffers from a refusal to admit that maybe a lightweight comedy doesn’t need to amble on for just over two hours.  However, it’s screenwriter and star Amy Schumer’s film rather than his.

The film opens with one of its funniest scenes, in which a father tells two small girls why he and their mother are getting divorced, ending with the lesson: “Monogamy isn’t natural.”  Cut to 23 years later, and Amy (Amy Schumer) has taken this lesson to heart, engaging in a string of drunken one-night stands, while her younger sister Kim (Brie Larson) has taken the more conventional (at least in mainstream movie terms) route of marriage and children.

Amy works as a writer for a magazine called S’nuff, whose editor is a monstrous Brit played by Tilda Swinton. I’m glad I knew that going in, or I would have spent the whole film struggling to work out where I knew her from.  Amy is assigned to interview a sports doctor (Bill Hader), despite knowing nothing about sport (I really started to warm to her at this admission).  She swiftly assigns him another notch on her bedpost, before accepting a further date and beginning to wonder if he might be the real thing.

I was unfamiliar with Schumer, who is best known for her Comedy Central series Inside Amy Schumer.  (There are plenty of clips available on youtube).  Trainwreck is a very good showcase for her. She can do verbal comedy, physical comedy, and is fine in the emotional scenes.  But while her journey from cynical, promiscuous, hard drinking unromantic to less cynical faithful partner to her Chilled Pixie Dream Guy is plausibly played, it also blunts the edges of her comic persona.  Perhaps that’s inevitable, a consequence of the need to serve the expectations of the romantic comedy audience, but it means I found myself laughing less frequently as the film meandered on to the expected happy ending.

While I’d like to think I’m the sort of reviewer who can put his penis to one side when judging a film, it’s inevitable that I’m going to respond differently to a comedy about relationships written by a woman than to one by a man; and I think it’s fair to say that I’ve been more forgiving of the baggy pace of Apatow’s films when they centre on the likes of Paul Rudd (or even Seth Rogen). With that in mind, I should say that my viewing companion (who was checking her watch far less often than I was) reported that post-screening reaction in the ladies’ was very positive.  There are a lot of cameo appearances by American sportspeople, none of whom I recognised (it didn’t matter much): maybe they were there to reassure guys in the audience that they hadn’t been forgotten.  Or maybe Amy Schumer is a big sports fan.  Either way, while my first taste of Amy Schumer was a positive one, I would have liked this film a lot more had it been 15 – 20 minutes shorter.