In an unpredictable world it’s good to have a bit of certainty. For me at least, one small certainty is that an odd number year means a trip to Venice at some point during the six months of the Biennale Arte. Being a creature of habit, I always start with a visit to the Giardini. I’m not entirely sure why this is but I suspect it comes down to a sense that the national pavilions interest me more than the central curated exhibition. As buildings are restored at the Arsenal and space for national presentations there increases, there’s actually a pretty even split between the number of countries showing at each of the two main sites and the number showing elsewhere in the city but somehow, to me at least, it’s still the pavilions in the Giardini that seem most significant taken as a whole (there are always real highlights tucked away in buildings across the city; this year, as in 2013, the golden lion for best national presentation went to an off-site exhibition: the Republic of Armenia’s pavilion on Isola di San Lazzaro degli Armeni where work by artists of the Armenian diaspora is exhibited in a monastery that has played a crucial role in preserving the cultural heritage of Armenia). It’s probably this same somewhat shonky thinking that always has me heading for the national pavilions first, leaving the curated show until the end and then trying to rush round it in the last hour or so of the afternoon (the entrance to the Arsenale leads directly to the central exhibition, so that always feels like the main event there and it’s the national presentations that get squeezed out).

Curated by Okwui Enwezor, a Nigerian who lives in Munich and New York, All The World’s Futures, the 56th Biennale’s International Exhibition, is inescapably political and, I think, unusually global. It’s also very, very big. There is work here by 136 artists from 53 countries including 159 works made specifically for this exhibition. Though it’s divided between the two sites, it’s hard to approach an exhibition on this scale without feeling more than a little daunted at the prospect. Turning to the biennale leaflet for help, I learn from Enwezor’s introductory text that:

‘Rather than one overarching theme that gathers and encapsulates diverse forms and practices into one unified field of vision, All the World’s Futures is informed by a layer of three intersecting Filters namely: Garden of Disorder, Liveness: On Epic Duration and Reading Capital. The three Filters represent a constellation of parameters, which will be touched upon in order to imagine and realize a diversity of practices.’

Um. What? On balance, I decide to use the title as my guide and set the brief text aside. Vaguely hoping enough light passes through the three filters to illuminate the work and perhaps even give me some idea what Enwezor is aiming for, I go in.

Even with clarity of purpose, which I do somewhat lack in the heat of a Venetian summer, it’s easy to get a bit confused in the central pavilion at the Giardini but eventually I think I managed to see everything, albeit without enough time to devote to durational works and working on the basis that I’d get more from the exhibition by focusing on the works that most grabbed my attention at the expense of others that didn’t shout loudly enough.

Providing a space for dialogue, at the heart of the Giardini section of the show is an arena, designed by architect David Adjaye, where Das Kapital is being read aloud by two performers. I find the gravity of the reading oddly compelling – it’s the slow rhythm, I think, as tables of numbers are read out, and the way one of the performers pauses and looks at the audience – if a little unenlightening given the limited time I can spend there. Enwezor is quoted as saying “I wanted to do something that has contemporary relevance and speaks to the situation we are in. And so I thought of Das Kapital, a book that nobody has read and yet everyone hates or quotes from.” The reading is directed by Isaac Julien, whose own work Kapital (which I’ve written about here before) is on show in the next room. 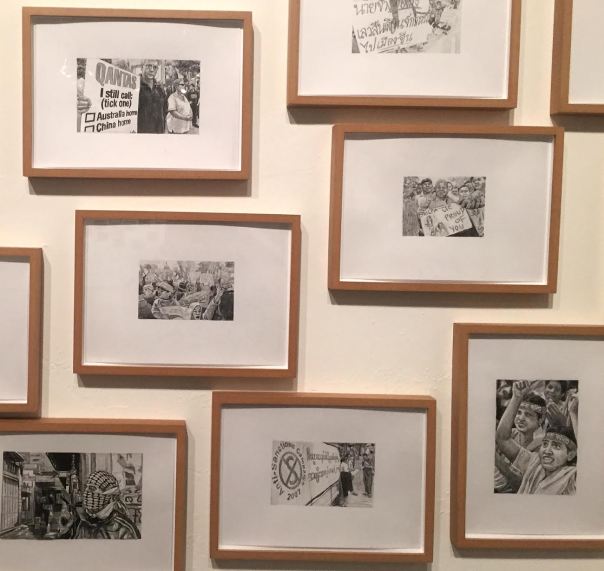 Though I think I essentially set the curatorial framework aside while at the show and saw the exhibition as a series of artworks to view in isolation, in thinking about it afterwards the works that had planted themselves most firmly in my mind are ones that speak of the state of the world, of labour, of capital and of protest. Sharing a space with Julien’s Kapital is Rirkit Tiravanija’s extraordinary series Demonstration Drawings; it is the translation of these images from newspaper photograph to drawing on a gallery wall that invites us to view the images afresh. Elsewhere in the central pavilion, photographs of migrant farm-workers from the series Let Us Now Praise Famous Men by Walker Evans serve to remind us of working conditions during the depression of the 1930s and Andreas Gursky’s photographs render global finance exquisite but unreal, too good to be true perhaps. In his space, Jeremy Deller makes links between the conditions in Victorian factories and the reality of working life now for those on zero hours contracts. A series of Victorian photographs of anonymous women workers from the Tredegar ironworks by a local photographer called William Clayton, shown here with the title The Shit Old Days, was taken, Deller says, “in response to debate about the role of women in heavy industry, and the effect it was having on domestic life”. Despite its black and white colour scheme, his banner, Today you have day off, seems almost celebratory until one realises that the words come from a text informing someone there is no work for them today.

In the opening room at the Arsenale, works by Bruce Nauman surround an installation by Adel Abdessemed in one of the most powerful spaces in the exhibition with Nauman’s neon pronouncements adding colour to Abdessemed’s machete flowers (the installation is named Nympheas after Monet’s waterlily series).

The vast Arsenale space is exhausting at the best of times but thanks to the sheer quantity of work on show and the seriousness of All The World’s Futures, I found it unusually so this year and I know I missed a fair bit. All sorts of things keep working their way back into my mind but there were two filmworks that have stayed with me particularly clearly. Steve McQueen’s double sided video installation Ashes offers two seemingly contrasting images – a carefree young man on a boat and two men painstakingly constructing a tombstone on the other – until we realise that the grave is that of Ashes, the young man McQueen had filmed in Grenada a decade earlier who was shot and killed after finding a stash of drugs on a beach.

Im Heung-Soon’s film Factory Complex is a feature length documentary about the conditions of women working in factories in Asia. The interviews with women who worked in appalling conditions – some imprisoned for going on strike in pursuit of being paid the minimum wage or sacked after being made ill by constant night working – are engaging and shocking; these are interspersed with more lyrical elements but it’s the stories of the women that hold me there and Factory Complex is definitely a film I’d like to watch in full.

It’s somehow quite appropriate that an exhibition dealing with the complexity of the contemporary world is hard to make sense of and, though I found All The World’s Futures overwhelming at times, it gave me a lot to think about despite spending far less time in it than would be ideal (not least because there are a number of video works that looked really interesting but which I spent far too little time with to make sense of). This isn’t an easy exhibition to make sense of and it’s often not much fun but it has given me a lot to think about. If this is the state of the world – and of course the reality is both more complex and more terrifying – then many of the world’s possible futures look bleak.

Of course, there’s no necessity for the two main strands of the biennale – the curated show and the national participations – to connect thematically, but this year a sense of taking stock and at least acknowledging the state of the world and the political and economic issues we all face running through the exhibitions in many of the national pavilions some of which, inevitably, directly reference the current circumstances of the countries in question (I didn’t get to the pavilions of Syria or Ukraine, but was moved by the drawings made by Iraqi refugees, fleeing Islamic State and fascinated, amused and appalled in equal measure by Cardiff-based Rahab Ghazoul’s It’s a long way back (Chilcot Project), which takes Tony Blair’s evidence to the Chilcot enquiry as its starting point). This is, for the most part, a serious biennale. There are welcome moments of levity though: lying back on the strange rubber steps in the French pavilion watching a tree amble through the building’s central space, for instance.

And then there’s Britain. Turning our backs on the world’s current woes and possible futures, we are represented by, well, a giant yellow penis in the form of Sarah Lucas’s Gold Cup Maradona which reclines under the portico at the entrance to the British Pavilion. I’m generally very much in favour of Lucas’s work and the sunniness of the colour nearly won me round (though much of the interior is custard yellow, it seems to me that someone missed a trick not getting this sponsored by Selfridges) and, as I would expect, the work did make me laugh but, in the context of this year’s biennale, Lucas’s visually brash exhibition seemed embarrassingly light on ideas.