Part of an occasional series in which Spank The Monkey travels to foreign countries, watches films in unfamiliar languages, and then complains about not understanding them. This episode: Qatar, September 2015.

Regular readers will know that the bulk of my Middle Eastern expeditions take place in the United Arab Emirates, typically Dubai or Abu Dhabi. But once in a while I also make the odd trip out to Qatar: the Gulf state which looked at the agreement seven of the others made back in 1971, and decided it was better off operating independently. Despite that independence, there are obvious similarities between the UAE and Qatar, most notably in their film industries – or, more accurately, their lack of same. To a casual reader of the 2015 London Film Festival programme, both territories seem more visible than usual in terms of international co-productions. In their own multiplexes, though, local product is still pitifully thin on the ground: meaning that my time in Doha’s cinemas was limited to Egyptian movies and some of the more esoteric stuff coming out of India.

So let’s start with a film that’s at least in the local language, the Egyptian romantic comedy El Khalbos. I’ve seen a few Egyptian comedies now, and can confidently spot all the tropes from a mile off. For example, they’re usually centred around a fantastically broad leading male performance. Here, it’s Mohamed Ragab playing Youssef, a photographer, whom we first meet chasing a zanily animated CGI mouse around his studio and taking photos of it. If you read the official synopsis, he’s just a happy-go-lucky guy looking for love in all the wrong places. From the non-Arabic speaking perspective, though, he’s a creepy serial polygamist, stringing along multiple women at a time before dropping them for the next one, or two.

The nature of Youssef’s obsession makes this a very episodic film, as we spend ten or twenty minutes with each of his conquests. They include a dark haired drama queen, a photographic model, a careless driver, and a revolutionary activist (who eventually causes Youssef to be captured and tortured by police, in another standard Egyptian comedy trope). At one point he looks like he’s going to settle down and marry into a quirky family that can only communicate by SHOUTING (trope #3). Throughout all this, there’s one female friend (played by Iman Al Assie) who’s always had his back when he’s been in trouble. She’s a writer, and she’s going out with a guy who looks like a young Jeremy Corbyn. Shame that can’t be resolved, isn’t it? 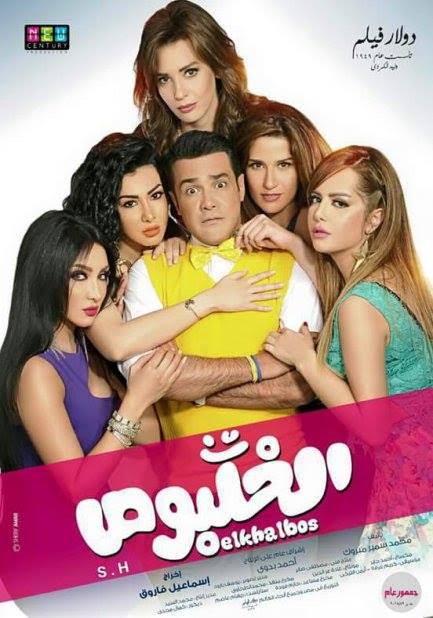 It’s hard to understand what anyone sees in Youssef, and why he’s having to beat off women with a shitty stick – though to be fair, they’re frequently beating him back. It’s certainly not the brilliance of his photography that attracts them: his big exhibition is made up of shots of people chasing after him after he’s stolen something of theirs. And girls aren’t drawn by his personality, which is best illustrated by his reaction to one of his girlfriends attempting suicide: he takes a selfie while holding up her slashed wrist and sends it to the writer to get her help. The film does virtually nothing to make you side with Youssef, apart from making him the lead character.

Sometimes, though, it’s fun just ploughing through a story waiting for the inevitable to happen, and El Khalbos passes the time agreeably while you’re doing that. The main surprises, to be frank, come in the soundtrack choices. The Benny Hill style music accompanying the suicide attempt makes completely unclear how seriously you’re meant to take it: at the other extreme, Youssef’s big emotional speech at the end is – no word of a lie – accompanied by the main theme from Schindler’s List. I’m assuming they just liked the tune, rather than it having any thematic significance.

Meanwhile, Indian cinema continues to play well to Arabic audiences – not just Bollywood, but other Indian films that play in non-Hindi languages. Three years ago, I saw Mayamohini, my first ever movie in the Malayalam language: and now Double Barrel is my second. I was so desperate to see a film which wasn’t going to come to the UK, I didn’t realise until 30 seconds into it that it had both Arabic and English subtitles. Shit! Well, I’m committed now.

This is the first feature from director Lijo Jose Pellissery, and his role model is painfully obvious – he desperately wants to be the Kerelan Guy Ritchie, for better or worse. A gangster named Don, along with his Pound Shop Trinity Off Of The Matrix sidekick, has (for reasons which have been utterly forgotten by the end of the film) a requirement to sell off a couple of precious stones, called Laila and Majnu, at a bargain price. He hires two goofball guys to do it – not to be confused with the other two goofball guys involved in a side plot involving the corpse of another mobster’s wife. All they need is an initial investment of 10 crore, which they manage to obtain through an unnecessarily complicated heist: unfortunately, it puts a whole posse of angry, angry criminals on their tail.

Throw in a dozen or more supporting characters – a courting couple who accidentally wander into every major shootout, a silent assassin with a five year old apprentice, a wedding party whose car gets hijacked, and a husband and wife Russian mobster team – and the scene is set for the highest of high jinks. Actually, no, it’s set for a right old bloody mess, which makes you realise how smart Richie was – or Vaughn, if you believe the rumours – in the way he structured something like Lock Stock. The MacGuffin was clearly in view at all times, and there were obvious reasons why everyone wanted it. Here, the stones have little more than symbolic value, with the unnecessary complication that they’re apparently worthless separately, so you know how their trajectory is going to play out over the course of the film.

The plot is crammed with such complications, though when you pull apart the layers there’s bugger all to it. That just leaves us with the visuals, which are colour-corrected, razor-edited and speed-ramped to within an inch of their lives until nothing makes sense any more. The three set-piece shootouts that the film is really about – set in a car park, a hotel, and the desert – are rendered cinematically dead by ham-fisted filmmaking in every department. It didn’t help that the day before seeing Double Barrel, I’d watched Tony Zhou’s excellent video essay on Jackie Chan’s brilliance as an action comedy director, which highlights every single rule that Pellissery fumbles here.

The most fascinating thing about the movie is the frequent smoking and drinking by most of the characters: an obvious signifier that we’re dealing with criminal types, but not one that the filmmakers want to glamourise. Hindi cinema usually covers this bad behaviour with a single disclaimer at the start of the film. This one, however, has a warning message in the bottom left hand corner of literally every shot with smoking or drinking in it, which distractingly turns all those shots into a Where’s Wally puzzle where you find yourself scanning the frame for cigs and bottles.

But as terrible as Double Barrel is, I still had to put up with a random fellow audience member standing next to me in the gents afterwards telling me how much he enjoyed it. Because ultimately, if it’s an action movie, it’ll sell in Qatar, just like it will in the UAE. We’re in a territory where the Coming Soon posters in a cinema foyer boast of the proximity of not one, but two Luke Goss movies. We may have to wait a long time for Qatar’s film industry to show what it’s capable of to the rest of the world: right now, it owes us nothing. Nothing, nothing at all.