So it’s that time of year again. On Wednesday we’ll be writing about some of our favourite telly of the year, and next week we’ll bring you some thoughts on some of the films of the year. But first, a musical palate-cleanser.

Sax – Fleur East: I said 2014 was The Year of the Sax, but here we are again. It’s like we’re living in a perpetual horn section nightmare from which we are simply too funky to wake. This is just great, like an East End Missy Elliot reworked That Don’t Impress Me Much and then dropped massive, blarping horn riffs all over it. The most straightforward, brash fun tune in this list, it stomps around for four minutes and doesn’t bore you for a single second. Who won X-Factor last year?

Nothing Without Love – Nate Ruess: The polar opposite of the top song, this is measured, restrained, delicate. It builds emotional intensity rather than blasting you in the face with a party cannon. That’s the other kind of pop I like. Hell of a chorus, too.

Déjà Vu – Giorgio Moroder ft Sia: Somewhere between the above two. It bounces along a shimmering line, hitting it perfectly with every beat. Should have been much bigger than it was, but I guess we’re done with Moroder now? Random Access Memories was so long ago…

Worth It – Fifth Harmony: This is a naggingly brilliant tune that evokes, for me, the best work of En Vogue. Don’t get in my face in the comments on that one. Just accept it.

WTF – Missy Elliott: Heyyyyy it’s the real Missy! That mention earlier was foreshadowing. I don’t just throw these lists together, you know*. After an enforced hiatus, Missy swans back in like she’s never been away and even manages to get an original performance out of Pharrell (in as much as he sounds like Del Tha Funky Homosapien). Top work.

Downtown – Macklemore: One one level, what the fuck is this? On another level HAHAHAHA THIS IS AMAZING WHAT THE FUCK?

Wildest Dreams – Taylor Swift: Probability of me leaving Swifty off this list – 0%. Really I should pick Bad Blood as that is the one most transformed from its album incarnation but god I just love this so much.

I Really Like You – Carly Rae Jepsen: The Canadian Taylor Swift returned with a sweet, simple rush of pop and will one day I AM SURE match the brilliance of Call Me Maybe. This, in the meantime, will do nicely.

Lean On – Major Lazer: I didn’t think much of this when I first heard it but it’s grown on me pretty steadily to the point where I seek it out. You should too!

Focus – Ariana Grande: Snuck in under the wire, this. It was between this and The Weekend’s I Can’t Feel My Face, but I skipped this less on Spotify so this wins! A RINGING ENDORSEMENT but #10 on these lists are always “Ehhhh, ok”. Then a few months later I discover some incredible hidden gem and think “Dammit, why wasn’t this on my best of list??” but there you go. OK, well, see you in 2016!

*lol I totally do.

Rather than ten embedded videos – a playlist!

Spank the Monkey is still burning compilation CDs, like he lives in Victorian England or something… 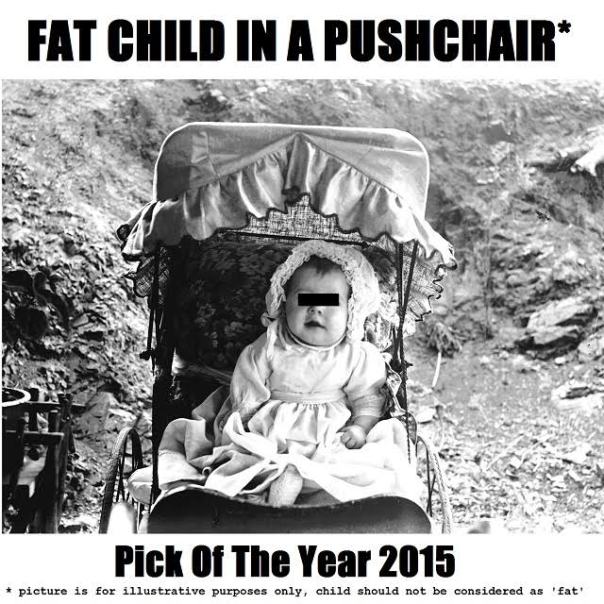 Regular readers know how this works: since 1982, I’ve spent part of each December combing through my favourite tracks from the previous twelve months, and assembling the best of them onto some sort of physical medium as a Pick Of The Year compilation, using a random lyric from one of the songs as its title. Fat Child In A Pushchair*: Pick Of The Year 2015 is number 34 in the series, and its track listing looks like this.

1. PUBLIC SERVICE BROADCASTING – Sputnik (from The Race For Space)
2. KENDRICK LAMAR – Alright (from To Pimp A Butterfly)
3. THE YOUNG’UNS – You Won’t Find Me On Benefits Street (from Another Man’s Ground)
4. SIMON LOVE FT. STEWART LEE – The Meaning Of Love (from It Seemed Like A Good Idea At The Time)
5. PAUL HARTNOLL FT. THE UNTHANKS – A Forest (from 8:58)
6. ROISIN MURPHY – Unputdownable (from Hairless Toys)
7. KID CARPET – Jesus Is A Hedgehog (from Noisy Nativity)
8. THE MEN THAT WILL NOT BE BLAMED FOR NOTHING – This House Is Not Haunted (from Not Your Typical Victorians)
9. MAX RICHTER & GRACE DAVIDSON – Path 5 (delta) (from From Sleep)
10. NEW ORDER – Singularity (from Music Complete)
11. SUFJAN STEVENS – Blue Bucket Of Gold (remix) (single)
12. THE CHEMICAL BROTHERS FT. BECK – Wide Open (from Born In The Echoes)
13. BJORK – History Of Touches (from Vulnicura)
14. EVERYTHING EVERYTHING – No Reptiles (from Get To Heaven)
15. GHOSTPOET FT. PAUL SMITH – Be Right Back, Moving House (from Shedding Skin)
16. FFS – Piss Off (from FFS)

I’d suggest that 2015 has been the best year for albums in a while, which is ironic given that I’m focussing on individual tracks here. But several of the records namechecked above have a cohesion and unity to them that’s been lacking in previous years. In two cases, picking an isolated song was incredibly difficult. Kendrick Lamar’s To Pimp A Butterfly is one of those albums I suspect I’ll be chewing over for some time to come, and it was tricky to pull out one track from its tightly constructed sequence. Music Complete, on the other hand, is the most gratifyingly consistent set of songs New Order have given us in two decades, to the extent that my favourite one keeps changing from week to week. Most of the other albums on my list are proving almost as resistant to being reduced down to a single banger, and that can only be a good thing.

A more detailed analysis of the individual tracks themselves can be found on my own website, along with a video playlist: for those of you who’d rather give your eyes a rest, here’s (almost) the whole compilation on Spotify.

That ‘almost’ is frustrating, I admit. Blame Kid Carpet for that – he’s between record companies at the moment, so all of his music tends to get released through Bandcamp and nowhere else. Still, his contribution to the Christmas festivities has him back on bouncy form after a couple of years mainly working on children’s shows, and it’s got a accompanying video promoting the Nativity play it’s taken from, so here you go.

Near the end of The Staves’ set at the Roundhouse on Monday 9th November, the sisters told the crowd that two years previously they’d played in a room above a pub close by and they couldn’t believe they were now playing to a capacity crowd in the huge Roundhouse space.  The Staves really have had an amazing couple of years, and it’s now impossible to listen to BBC 6 Music for any length of time without hearing one of their excellent tracks.

The November show was the final date in their most recent tour that kicked off in Manchester in late October.  Truthfully it sounded a little like the end of the tour in their voices too, though not to the detriment of the songs.  The highlight of the whole set was a mesmerising performance of No Me, No You, No More going in to Let Me Down, and the overlapping voices of the final part of the second song had an extra-special beauty with Emily, Jessica and Camilla Staveley-Taylor gathered around the same microphone.

One of the things I love about The Staves is that although they’re described as acoustic folk rock, they can really rock out when the song demands it.  In keeping with the bigger Roundhouse stage the sisters had additional musical support and really filled the space.  It was a great night, and The Staves deserve every bit of their success.

This year’s stand out Prom was the 1extra grime prom for the energy and presence of Stormzy.  Aged 22, unsigned and likely to remain that way because it suits him, he won a MOBO in 2014 for best grime act, and again in 2015.

After a long orchestral introduction from Jules Buckley and the Metropole Orkest, Stormzy opened the event with Know Me From, and after that, no one, not headliner Wretch32, nor old hands Krept and Konan or Lethal Bizzle, came anywhere near touching him for energy, musicality or talent.

The ethos of the Proms is to make classical music accessible to the masses, and every year sees the same arguments about dumbing down, clapping between movements and how to bring new audiences to classical music. The 1extra Prom audience was undeniably different from other Prom audiences, more lively, much more clubbly, accustomed to reacting to music while it’s playing. But what if this type of Prom is about bringing urban music to the older, classical audience. People who are curious about new music but want to hear it sitting in red velvet seats, with a comfortable bar and drinks in glasses, and a short bus trip home at the end of the night?