MrMoth sits in a darkened space and listens to an old story told through fresh language. 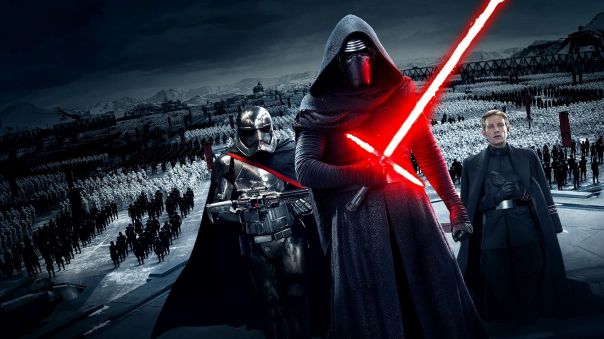 A long time ago, about 40 years, a man started telling a story. It was neither original nor, in its basic form, even interesting. Some kid finds their destiny and defeats the baddies, with a little help from his archetypes. In the telling, though, it grew. It hit nerves, burrowed into minds, spread through blood like tiny organisms although let’s ignore that last one, pretend I never said it. A generation of children – boys and girls – were touched with some sort of strange magic from this story. They, we, saw it grow into a phenomenon. How could it not, once we were in charge? When we hit our twenties, the cycle began anew. We were earning, ready to spend our idle money on tickets on merchandise on the hope that we would feel like we did as children.

But we didn’t. The prequels were, ultimately, a disappointment. They were the same man telling the same story, but it was a strange version of it. The kid found their destiny and that destiny was evil. We all knew it. Why tell us? You wanted to tell us, storyteller, but we didn’t want to listen. Your tale of trade negotiations, of awkward romance, of fraternal betrayal… it was too angular, too boring, too weird. We didn’t know anyone. It looked wrong, too. It was all shiny and unreal. We wanted the world we knew when we were children; grimy, broken, true.

The storyteller had to go. Had to. By this point so much time had passed that the children had their own children, and they wanted those children to feel the same thrill in that huge, dark room. We wanted not just the same story but the same places, the same people, the same beats on the same drum. Money changed hands. The storyteller stood aside, a rich man. A richer man. The storybook became a factory, vast and generous. A new tale every year! The world explored! More of the same, only bigger, better, and without HIM involved!

So here we are. Sitting in the dark, ready to live again.

I admit it; sat there with my 3D glasses on, my heart rate increased in the moments before *that* opening sequence, the same one we see every time. And this time the logo and opening crawl sat elegantly atop the starfield, floating in space. Was that quite a long opening crawl? I think it felt long. It had a lot of ground to cover, but it was clumsy in doing so. John Williams’ score retains every scrap of its power, and the new additions don’t let it down even slightly. When those strident brass notes hit you, it’s always Star Wars. No matter what. When a TIE fighter screams past or a lightsaber hums to life, that’s Star Wars. This is a film that sounds like Star Wars, looks like Star Wars…

Well, no. It has the design aesthetic of Star Wars. The ships, the aliens, the costumes, the world-building… it’s a faultless recreation, and the twists on that aesthetic fit seamlessly with it. Mind you, there’s always been something a little Generic Platform Game about the worlds of Star Wars. An ice level. A lava level. A forest level. A desert level. A temple. A dungeon. A blue-lit spaceship. SPACE. So it’s not hard to fit in, really, is it? The thing is, this doesn’t look like a Star Wars film. The camera movements are too showy, too attention-grabbing, too clever by half. For all George Lucas’s tricks, he moved his camera – even his digital camera – at stately pace, framing as conventionally as the movie brats of the mid-70s dared. Abrams is a different generation, and his camera moves as if it feared no barrier, no broken frame. It swoops and judders and twists, comes in at odd angles. The colour is all wrong. The odd iris wipe when you remember to do so does not make a film look like Star Wars.

Abrams clearly adores the films. The stories are in his bones, just as they’re in mine and just as they are in the bones of millions of us. The difference is, he’s been given the keys to the story factory. He knows how it should go but he has his own impulses, too. While the plot doesn’t seem to cleave too tightly to the modern Hollywood template, which is laudable, it is dotted with maybe a few too many action sequences, sequences that feel like AND HERE IS A SET PIECE. They move the story along, they are genuinely thrilling, they drive the film. Each one could be the climax of an older chapter of the story. But they feel like they’ve come from elsewhere, from somewhere much newer and less… mythic? Don’t let me use that word, don’t. But there it is, I’ve said it now and it’s hanging in the air over this whole endeavour. How do you compete with a myth? The answer is you take it and do your own thing and that would be WONDERFUL, wouldn’t it? That’s not happening here. Yes, there are modern sensibilities at play, but there are so many “oh, that’s an homage to that” moments, so many parallels and echoes. So many, but not used in the way Lucas used them in the prequels.

The prequels. That’s something else hanging in the air over this film. Is it better than the prequels? Depends on your point of view. It’s a good sci-fi blockbuster, it really is. And it’s a good sci-fi blockbuster that hits enough nostalgia buttons that it will make a whole generation feel warm and fuzzy. Oh look, it’s Chewbacca. Look, it’s the Falcon. Look, it’s Leia. Hey look, it’s the boiled-clean skull of Wicket W Warwick. But the prequels had something this doesn’t have: Lucas. For better or for worse, Star Wars is his baby and the authored nature of the series made it what it is today.

I’ve still not said much about the film itself, have I? I’m wary of spoilers of course, and I’ll avoid them where I can. No guarantees. So what’s good? John Boyega is magnificent as Finn, the deserter stormtrooper. He struggles with doing the right thing all the way through, just as Han Solo once did. And, just the same, he comes good in the end. On that note, Harrison Ford is clearly having a ball all the way through, finally able to be Han without having to mouth the dialogue he notoriously hated. I won’t mention that he was obviously having a ball as an old Indy in Kingdom of the Crystal Skull, that’s not fair. Similarly, Carrie Fisher as the older, wiser Leia is as good to watch in a different way entirely. She has deepened the character, given her the core of solid iron that was hinted at from the start but softened her round the edges. Kylo Ren is a good villain – threatening, powerful and possessed of an excellent speaking voice. Where he deviates from Vader, because he must, is his petulance, his arrogance, his lack of control. He is Vader as Vader was during this notorious scene:

Decent-sized spoiler here – when I was walking home I heard a couple of blokes from the screening I was in say that Kylo Ren was all wrong when he took the mask off. One of them said “Am I tough enough? Hell yes, I’m tough enough!” which is funny and true and I vowed to steal it for this review. I think I disagree. He looked like a wet weekend, but that was sort of the idea, wasn’t it? That he was a joke, a hopeless wannabe. The best Snoke could manage, but then Snoke is literally Gollum so who cares? Spoiler ends

The bad, then. Sorry about this, but we must face disappointment. Daisy Ridley is quite bad as Rey, I think. She improved by the time she was required to subvert a particularly annoying cliché she’d fallen into, but it was too late by then. I’d decided she was no good. Oscar Isaac’s Poe Dameron is great, assuming you like someone whose entire character is described and defined within the opening crawl. He’s a great pilot and that’s it. He develops not one bit from that. Maybe he will, but he didn’t in this film. There were some awful scenes aboard Han’s salvage ship involving mobile versions of the terrible CGI Saarlacc. A lot of the dialogue is garbage – yes, you may hate Lucas’s dialogue but did anyone in any of the first six films ever say “We’re not done”? Little moments like that or the rebooted-Kirk quippy dialogue of Dameron in the early scenes with Ren just jar with the world of Star Wars. The brutality of the First Order is a little hard to take at times. Sure, the Empire were genocidal maniacs but they never gunned down an entire village on camera.

Speaking of the First Order, perhaps a little less of the on-the-nose Nazism would make them less uncomfortable? Still, it is good to see that they uphold at least one tradition of the Empire – constructing giant spherical death-cannons with a ridiculously obvious weak spot.

In the end, what wins? The good or the bad? This is a film that looks and sounds right, but does it feel right? Did I enjoy the film, and is that enough? I did, and it isn’t. You could argue that this isn’t meant for me, it’s aimed at children and they will be the ultimate judges. I disagree. Abrams has created a film he wants, that he believes his generation wants to see. He’s probably right, I’m usually on the wrong side of this sort of thing. But this is me, these are my feelings. Star Wars is in my soul, for all that it sounds stupid and childish to articulate, but it’s in a lot of souls and maybe yours is one of them. You might find this film rings true to the Star Wars in you and you know what? That’s how it should be. All I can do is say that it rang hollow through my body. The story was good, the story was fun, the story wasn’t right.