Niall Anderson girds his loins, then girds them again, for his second snowy revisionist western in as many days, The Revenant. 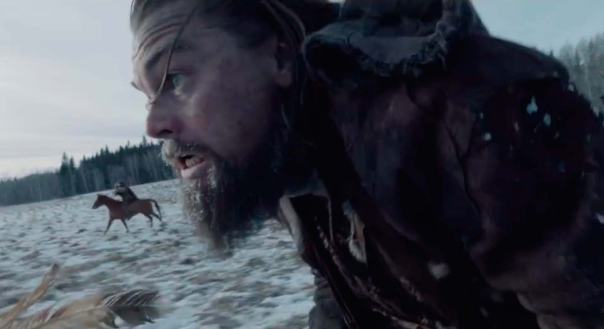 If there’s a joke anywhere in The Revenant, I missed it. If a character smiles, or takes a breath that sounds less grievous than a death rattle, I must have missed those too. At one point someone is so overcome with starvation and blood-loss that he hugs a tree, thinking it’s his wife. The viewer infers from this that nature contains all things: that cruelty and love exist within the same overwhelming space. The skeletal score makes one of its few swooning movements. The viewer will at this point reflect that the line between cosmic severity and deep silliness is very thin indeed.

The Revenant would like to be taken seriously. My advice would be to have a few beers before watching: the earlier you allow yourself to laugh, the better the time you’re likely to have. In my case, dutiful sobriety lasted about ten minutes – till the first moment Tom Hardy opens his mouth. Dressed as Bungle from Rainbow and employing a voice that sounds like a lump of coal trapped under a doorframe, Hardy takes his usual incomprehensibility into new and wondrous directions here. At this point I knew I could relax and surrender to the spectacle.

And what a spectacle it is. Leaving snark aside, The Revenant is the most exciting adventure film I’ve seen in years. There are half a dozen long action sequences that make Spielberg look like a rank amateur. The combination of precise human choreography and Emmanuel Lubezki’s free-wheeling cinematography results in moments so unexpectedly graceful or brutal (or both) that they feel like a truer articulation of the film’s obsessions than the dialogue or the plot. When I left the screening, all I wanted to do was see The Revenant again. And when I do I’ll be seeing it on the biggest screen possible.

The plot, then. There’s a bunch of armed traders wandering about the Louisiana Purchase in the 1820s. Winter is coming and they’re turning towards home having gathered all the pelts they think they can carry. But they’re not alone. Other hunters and traders have been working the territory, and they’ve stirred up trouble with the local Arikara tribe. The film begins with a spectacular attack by the Arikara that kills more than half the traders and forces the rest into retreat. The burden of a safe retreat falls on the shoulders of Hugh Glass (Leonardo DiCaprio), who is an experienced tracker but also a figure of some suspicion in the group. He is known to have had a Native American wife, and he brings with him a son, Hawk, by that marriage. It’s at this point that mercenary John Fitzgerald (Tom Hardy) brings up his objections to being led around Louisiana by a squaw-lovin’ mfmfmfmfmaagggghgh. (When The Revenant comes out on DVD the subtitles will tell us what he’s actually saying, but that’s the gist.)

But then things really go wrong. DiCaprio – squaw-lovin’ mfmfmfmfmaagggghgh though he may be – is attacked by a giant CGI bear. (This scene is amazing.) The remainder of the group wrestle between leaving him behind or carrying him home. In the end their leader Captain Andrew Henry (Domhnall Gleeson) splits the difference by pushing homewards while leaving Hawk and two other men behind to ensure that DiCaprio at least has a decent burial. One of the men left behind is Tom Hardy. ‘Mfmfmfmfmaagggghgh gnrar brah,’ says Tom Hardy, and you can tell he really means it.

Or does he? Between one thing or another, Leo ends up being left for dead and Tom Hardy ends up being paid for respectfully watching him die. This would be a lovely bittersweet ending, except … Leo’s not dead. Oh man, who saw that coming? When Leo and Tom finally square off it sounds like an asthma inhaler fighting a hand-dryer over a slice of ham. In other words, it’s exactly what you want.

It also takes a very long time to get there. The Revenant is crammed with beauty, but it suffers the way survival epics often do – by needing to be long in order to carry the idea of endurance. It should also be said that a great deal of the film is Leo’s sprouty face going into a scowl as he realises he’s going to have to do yet another horrible thing to survive. A certain repetitiousness creeps in. But all this is tolerable given the spectacular pay-off.

Rather less tolerable is the film’s nativist politics. Director Alejandro Iñárritu has always had a weakness for wifty-wafty stories of mysterious human connection, and this works its way into The Revenant in the form of animism – the sense that the world of nature is alive with divine reckonings. At its simplest, and least objectionable, The Revenant conjures that idea with long shots of dappled sun through giant redwoods, or the wind mooching through grass. (It’s probably not a coincidence that Emmanuel Lubezki is also Terrence Malick’s main cinematographer.) But having found god in nature, Iñárritu then goes on to find him again in the film’s Native American characters – all of whom speak with the divine authority of the burning bush to Moses. You get the sense of the Native Americans as a People, but not as people, which perhaps wouldn’t matter so much except that it’s Leo’s closeness to the Native American spirit that allows him to survive being left for dead. In other words, your Native American animism is all well and good, but it takes a white man to really get things done with it.

This is a deliberately uncharitable reading (The Revenant is hokily offensive rather than actively racist), but if we’re going to go in hard on Tarantino’s The Hateful Eight, I see no reason to spare The Revenant.

Given the Oscar success of Iñárritu’s last film Birdman, it seems unlikely that The Revenant will pick up more than a handful of gongs this year. DiCaprio seems like a solid bet here; not because he’s particularly good, but because he’s insanely committed to every moment of it, and the Academy likes insane commitment. If there’s any justice, Lubezki will win Best Cinematography, but given that it would be his third straight victory, the Academy may look elsewhere. This would be a shame: The Revenant makes his work on Gravity look mundane. For all its flaws, The Revenant is unmissable.