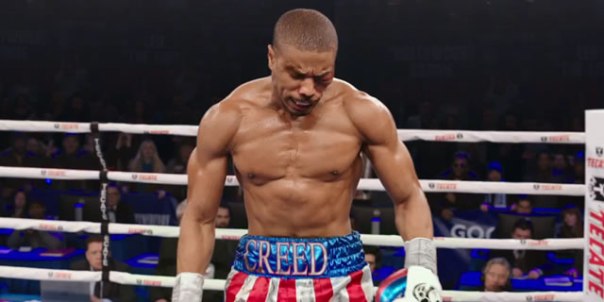 We first meet Adonis Creed in California as a delinquent kid in juvie (played by Alex Henderson), on the fast track to a rough, and probably short, adulthood. Apollo’s widow Mary-Anne (Phylicia Rashad), although not his mother, takes him in and raises him in a life of comfort and privilege. When the film flashes forward it finds the young adult Creed (Michael B. Jordan) working in a white collar job with prospects by day, but secretly fighting – and winning – pro bouts in hole-in-the-wall joints in Mexico by night. When Adonis resolves to give up the dull but respectable life of the office drone, it causes a rift with Mary-Anne, who lost her husband in the ring, and he leaves Los Angeles for Philadelphia, intent on making a mentor and trainer out of his father’s opponent turned friend, Rocky Balboa (Oscar-nominated Sylvester Stallone). Rocky is reluctant to take Adonis on – he blames himself for Apollo’s death – but you know how this goes.

From this point, the film hits a spookily familiar set of beats, as Adonis trains (in montages, of course), woos the girl next door (Tessa Thompson) and finally gets an unlikely shot at the world champion (Scouse scowler “Pretty” Ricky Conlan, played by real-life champ Anthony Bellew), while Rocky and Apollo themselves loom over the narrative as foretellings of possible futures for the young fighter. Writer-director Ryan Coogler, working on his second feature after the acclaimed Fruitvale Station (co-writing here with his USC classmate and screenwriting debutant Aaron Covington), rather than shying away from the legacy of the previous films in the series, exploits every echo of them for emotion, boldly risking gaucheness or even shamelessness, always anchored by the sheer fluidity and grace of his film-making, and his evident and sincere love for the series. If you can remain dry-eyed when a sad piano version of Bill Conti’s original Rocky theme wells up after Rocky gets some particularly bad news, or refrain from punching the air when that theme comes back strong in Adonis’s big moment, you’re a better man than I am (I say man advisedly, this movie fails the Bechdel Test).

There’s an obvious comparison to be made with the way Disney and J.J. Abrahams chose to approach Star Wars: the Force Awakens; what’s interesting is that Creed is not a studio-mandated cash-grab, but a project that Coogler conceived of before Fruitvale Station was made, and convinced Stallone to join. Added to that, the recent news that Coogler has joined Marvel’s Black Panther project suggests that his heart may be in genre movies as much as it is in the fiercely socially engaged likes of his first film. That can only be a good thing, both for ethnic diversity in the front line of mainstream commercial films, and, given how skilful a film maker he already is, for their quality.

Coogler’s engagement with the racial politics of the Rocky franchise is also worth noting. The Philadelphia depicted in the original film was thoroughly whitewashed (up to and including white people singing close-harmony soul on street corners), and there is an element of queasiness to the original portrayal of Apollo Creed (magnified if one sees the original Creed as a riff on the persona of Muhammad Ali) as a cynical capitalist opportunist, wrapping himself in the Stars and Stripes, when contrasted with Balboa’s authenticity, his naively stoical faith in putting one foot in front of the other (and one fist in front of the other) until you get your dues. Of course, the later trajectory of the Balboa-Creed relationship does a lot to repair those original impressions, and Creed puts the capstone on that process, reclaiming authenticity and feeling on behalf of the black protagonist just as it reclaims Philly, while never dumping on what came before. (Side note: such cynicism as exists in the film is, of course, outsourced to the Brits, but it’s OK [spoilers], everyone respects everyone else in the end).

Sylvester Stallone is nailed on for that Oscar, you’ll see why when you see the film. Michael B. Jordan also deserved awards recognition, for a performance of considerable emotional and physical commitment and precision, as did Coogler and cinematographer Maryse Alberti. I haven’t even mentioned the fight choreography, which is excellent. Creed is, of its type, more or less a perfect film, see it with a crowd on opening weekend if you can.