It’s that time of year again. Spank the Monkey and Indy Datta take a look at this year’s Oscar nominated short films after the jump. 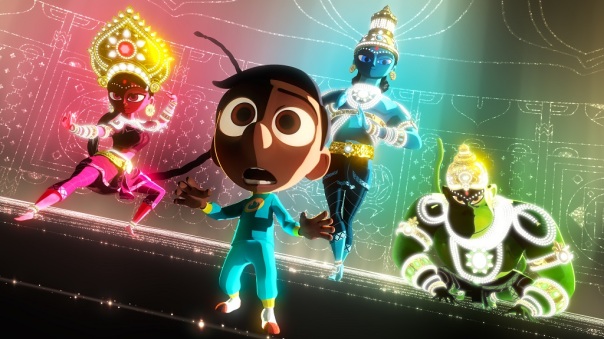 The animated nominees – Spank the Monkey

This is the third year that I’ve reviewed the Oscar-nominated animated shorts for Europe’s Best Website, so you probably think you know how this is going to pan out. I’ll be generally complimentary about all the nominees, while bemoaning the fact that although there’s one film that obviously deserves the gong for its adventurousness, the Disney entry will win regardless. And then on the night, the Disney entry wins.

This year… well, we’ll see. Disney’s submission actually comes from Sanjay Patel at Pixar, and that makes an important difference: Sanjay’s Super Team feels like a story someone actually wanted to tell, rather than a technical research and development exercise (which was what earlier Disney winners like Paperman and Feast felt like). It starts out as a clash between ideologies – young Sanjay’s love of noisy superhero cartoons, and his father’s attempt at quiet worship – and then gloriously melds the two as Vishnu, Durga and Hanuman join forces in a veritable Justice League of Hinduism. It walks a nervy tightrope between being too preachy about non-Christian religions and being massively culturally insensitive, and somehow manages to pull off not falling into either category. Sure, it’s as technically perfect as you’d expect, but so was Pixar’s other short of 2015 – Lava – and that was mind-bendingly terrible. As is always the case with Pixar’s best work, story is everything.

What makes this year’s nominees so interesting, though, is that for once the other entries don’t struggle to prove themselves against the might of the Mouse. Take, for example, Prologue, the latest from veteran animator Richard Williams. You might know him for his groundbreaking work on Who Framed Roger Rabbit, or the fact that his most troubled film (The Thief And The Cobbler) was in production for over three decades of his life. With that in mind, his next feature has been cunningly planned as a series of standalone shorts that will eventually – possibly in a decade or two – come together as a single piece. So it’s easy to see why Prologue feels more like a fragment than a finished work: a visceral depiction of a four-man skirmish during the Spartan wars. But that description doesn’t prepare you for the magnificent technique on display: extraordinarily fluid hand-drawn art, whose classical look blends surprisingly well with its ultra-modern approach to camera movement and the depiction of violence. Did I mention that Williams is 82 years old, by the way? I’ll be fascinated to see where this story goes in future episodes, but he’s as aware as anyone else that he’ll need to get a move on.

Williams is universally accepted as one of the gods of animation, but it’s nice to see that the less familiar directors who’ve been nominated this year hold their own comfortably against him. Gabriel Osorio, like Sanjay Patel, has been nominated for his first-ever short, Bear Story. Visually, it’s impressive for the way it mixes two contrasting styles – hyper-realism for the scenes of a bear preparing for his job, and the charmingly jerky depiction of the mechanical diorama he operates. But it’s the boundary between the two where the magic happens, as we discover it’s really a film about why we tell stories.

Meanwhile, the more experienced Konstantin Bronzit contributes the most straightforwardly comic piece in We Can’t Live Without Cosmos, although even that has a vein of melancholy running through it. As we watch two astronauts having a ridiculous amount of fun preparing for a space mission, there’s always a sense that the fun will have to stop, and Bronzit handles the gradual switch in tone impressively.

But if it’s tonal switches you want, then we have to acknowledge that in a rather splendid year for nominees, Don Hertzfeldt’s World Of Tomorrow stands above them all by every criterion you choose to name. As with all of his work, it starts from a simple premise: a little girl watching TV is suddenly visited by a woman claiming to be a version of herself from the future, and invited to see what that future will be like. Unlike Hertzfeldt’s masterpiece, It’s Such A Beautiful Day, it doesn’t tear your heart into tiny tiny pieces: or, more accurately, it does, but while doing several other things at the same time. It has all the dark humour of the best dystopian sci-fi, while hurling around huge ideas about technology and philosophy as if they were nothing, and mixes naive stick figures with astonishing colour backgrounds to ensure your eyes remain as constantly tickled as your brain.

My colleague Paul Duane has eloquently made the point elsewhere that World Of Tomorrow isn’t so much the best animated short of 2015 as the best film, period. He may well have a point, although let’s face it, it’s no John Wick. Still, if you’ve jumped to the last paragraph to see where you should be laying hard cash at the bookie’s, then I’d say that Don Hertzfeldt has to be the man to beat. Unless, of course, the Academy looks at Sanjay’s Super Team and sees it as an easy way out of their #OscarsSoWhite dilemma…

In previous years I’ve kicked this roundup off by moaning about the Academy’s outmoded eligibility rules, the inordinate length of many of the nominees, and their generally poor quality. While my opinion of the eligibility rules hasn’t changed, it’s only fair to note that not only are this year’s live action nominees largely pretty decent, but also mostly actually short. And the best one, annoyingly, is the longest.

Three of this year’s nominees are set in conflict zones. Shok (Friend) by British writer-director Jamie Donoughue, centres on a friendship between two young Kosovar Albanian boys during the leadup to the Kosovo War, as recalled by one of those boys as an adult in a present day framing story. Donoughue’s interest in Kosovo dates back to 2010, when he was stranded there in the aftermath of the Eyjafjallajökull erruption, and the story of Shok is derived from personal testimony from survivors of the conflict. Donoughue’s film is well-made and sincerely intended, but the somewhat predictable central vignette doesn’t really connect to the framing narrative, and Shok doesn’t feel like much more than a calling card for a feature. Ave Maria, in which the routine of a silent order of nuns in the West Bank is disrupted when a family of Israeli settlers crashes their car into their convent just as the rules of the jewish sabbath kick in, is more entertaining than Shok, but even less substantial, its drily humorous script and decent performances ill-served by the daytime TV blandness of the direction.

The strongest of the war-zone triptych is the debut of AFI Conservatory graduate Henry Hughes, based on his own experiences as a paratrooper in Afghanistan, and those of his translator. In Day One, a female translator’s first day working for the US Army in Afghanistan is marked by an IED exploding, a tense standoff with a suspected culprit, and a spot of emergency midwifery, when the suspect’s wife goes into labour far from any female doctor. Hughes’s writing and directing balances tension, emotion and verisimilitude with grace, and I can see Oscar voters appreciating his skill, as well his film’s safely humanist-liberal outlook.

I enjoyed the non-war films more, personally. The winsome romance Stutterer – about a lonely Hackney typesetter (!) with a severe speech impediment, who is paralysed by fear when it’s time to finally meet the girl who’s fallen in love with him online – might appear, based on its bare particulars, to be too cute to live, and its aesthetic walks a perilous line between coolly contemporary and mobile network viral spot, but Irish writer-director Benjamin Cleary sticks the landing big time, and you wouldn’t begrudge him a few lucrative commercial gigs on the way to the sweet-natured, swoony first feature he surely has in him.

The clear standout for me, though, was the notably less sweet and nice German-Austrian Alles Wird Gut (Everything Will be Okay – the title is thuddingly ironic in a way that’s slightly beneath the film) – the story of a divorced dad’s weekend with his young daughter that starts with him picking her up, without even making a microsecond of eye contact with his ex, and gets sketchier from there. Writer-director Patrick Vollrath studied under Michael Haneke, but the way he conjures nail-biting drama from his film’s unadorned surfaces and hard, tight focus on his actors calls to mind the best work of the Dardenne Brothers. The performance of Julia Pointner as the daughter is probably as good as any in this year’s main acting categories. Watch out for her, and for Vollrath, in the future.