Part of an occasional series in which Spank The Monkey travels to foreign countries, watches films in unfamiliar languages, and then complains about not understanding them. This episode: Dubai, February 2016.

This is Ohood Al Roumi. You probably read about her in the news last month, when she was appointed to the cabinet of the United Arab Emirates as their first ever Minister of State for Happiness. Now, there are plenty of things I like about the UAE – not least, the way they pay me when I go out there to work for a week or two each year – but I have to admit there’s something a bit creepy about that job title. You can’t legislate for happiness, even indirectly. For my part, the thing that would make me most happy about the UAE is if they started making their own films more regularly. We know that they make some – our own Blake Backlash reviewed Rattle The Cage just the other week – but all too often, I have to make do with Egyptian productions if I want to see Arabic language cinema over here. Sort that out, Ohood.

Take Kedbet Kol Youm (A Lie For Every Day), for example. It’s obvious from the bright colours of the poster that it’s going to be a traditional romcom, even though the promotional copy on the Reel Cinemas website tried to flog it as a more cynical proposition than usual. At its centre are two couples, whom I’ll have to identify by their physical characteristics, because I didn’t catch any of their names and none of these movies ever makes it to IMDB. Beardy and Sulky’s relationship has been a bit tetchy lately, as has the one between Fatty and Bad Hair. Beardy and Bad Hair are work colleagues, and between them they cook up the idea of the four of them going away on a joint beach holiday. That should sort out their problems once and for all, shouldn’t it? 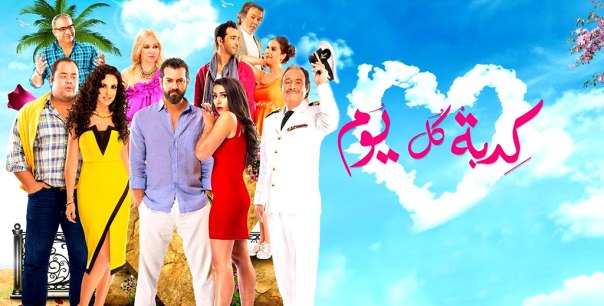 By now you’re probably assuming that some sort of partner swap is about to take place. Well, you’re wrong, although the four encounter every other possible complication during their time away. Most of them are the work of a blonde woman who has a small harem of older men in tow, and seems to delight in causing emotional unrest. This is particularly galling for her daughter, who appears to be half of the sole happy couple on the whole resort, or at least would be if the oldies weren’t determined to make her as miserable as the rest of them. Maybe that’s what they mean by cynical.

It’s nicely shot, with the beachside location providing a pretty backdrop, but it feels like a bit of a mess in narrative terms. It seesaws wildly between broad comedy and theoretically emotional moments: there’s some amusement to be had with the former, but the drama is completely drowned in sub-daytime soap Sad Music. You find yourself wishing that the couples would stop talking, cut out the middle man and just play minor piano chords at each other. Still, there are genre rules to be followed, and we reach a point after an hour and a half where everybody gets a happy ending – with the notable exception of the woman who smoked a joint and decided for a change to spend some time with someone who didn’t look like the fat guy in every Egyptian movie, which apparently has now damned her into permanent spinsterhood. Predictable, that.

Like I said: I see a lot of Egyptian cinema on these jaunts, occasionally broken up with the odd non-Hindi Indian film. So when I discovered that there was a non-Egyptian Arabic language film playing in town, I ran straight for it. In fact, I went into Bennesbeh Labokra, Chou? (What About Tomorrow?) knowing very little about it in advance. The cinema I saw it at didn’t seem particularly impressed, the sign over the door simply advertising it as Lebanese Movie, like the worst Seltzer/Friedberg spoof ever. The poster had one bit of interesting information in English – the phrase ‘the original 1978 play in cinemas’. So, at least I knew to expect something a bit stagey.

Not this stagey, though. This isn’t a recreation of a historical theatrical performance, or a professionally filmed record of the original. It’s the actual 1978 show, but shot on a couple of Super 8 cameras positioned in the stalls. One camera is on a tripod, and swings around crazily to cover both ends of the stage: the other is hand-held, and shakes like Paul Greengrass on uppers. Both are out of focus so often, much of the play looks like it’s been put through that Photoshop filter for making photos look like bad watercolours. It also appears to have been shot on a couple of different nights in the run, and edited with no attempt at visual continuity whatsoever, with one actress changing her dress several times in a single scene. Put it this way: this trailer gives you an idea of the low image quality, and they’ve gone to a huge amount of trouble to cherrypick the best shots for it.

So what we have here is, to all intents and purposes, an official bootleg of a 1978 theatre show. And here’s the kicker: since it came out in January this year, it’s smashed local box office records, and is on track to become the highest grossing Lebanese film of all time. Because people loved this play. Written by and starring Ziad Rahbani, who’s gone on to become a respected entertainer and political commentator, it’s a drama set in a bar with a very cosmopolitan clientele – English, French and Spanish are heard alongside Arabic. The bar’s run by Zakaria (Rahbani) and his wife Thuraya (Nabila Zeitouni), another couple who seem to be getting on each other’s nerves more and more as the story progresses. Most of the time, it’s played for laughs, focussing on the zany regular customers and Zakaria’s manic sub-Fawlty intensity (one particular exit from the set is a delightful bit of physical comedy, which you can see in the trailer). And every so often, a man in a Reni hat steps forward to sing a song.

It doesn’t seem like much, but reading up about the play afterwards reveals the subtext of deprivation that’s at the heart of Zakaria and Thuraya’s disintegrating marriage. There are a couple of self-consciously big speeches towards the end: obviously I couldn’t tell you a single word of them, but I’ve seen enough David Hare plays to spot the tell-tale signs of The Author’s Message. Apparently, they struck a chord with audiences in 1978 Beirut, to the extent that audio bootlegs of the show have been doing the rounds ever since. With the country’s politics going through similar problems in 2016, recent Lebanese screenings have apparently climaxed with audiences shouting out the lines along with Rahbani. No sign of that level of response in the UAE, unfortunately, where we had to make do with the sudden crude lurch into melodrama of the closing minutes. (Well, it feels sudden if you’ve not understood any of the dialogue leading up to it.)

Bennesbeh Labokra, Chou? is a textbook example of how a lack of historical context can leave a monoglot viewer like myself completely baffled while watching a movie. At the other extreme, we have the Egyptian film Ocean 14, which sets out its stall in a magnificently comprehensible fashion in its opening minutes. Firstly, there’s the title: we know it’s not just a coincidence, as one character helpfully namechecks Ocean’s 11 at the start, indicating this will be a heist movie that’s seen other heist movies. Secondly, we know it’ll be a silly heist movie, as the leader hires an Antonio Banderas parody and a Bruce Lee parody as his first crew members. Thirdly, we know the target of the heist, thanks to a neat mashup of an international reference and a local one: we pull back from a TV showing one of the bitchy judges on Arab Idol, to reveal that the surrounding walls are covered with vandalised pictures of her face. Finally, the tone of the movie is set by the revelation that all of our three principals are completely off their tits.

So that’s something I wasn’t expecting: an Egyptian stoner movie, a comedy of crime amongst the hookah-smoking classes. This is confirmed when the leader hooks up with his drug dealer, who solves all of the main dilemmas of the plot by pharmaceutical means. He ends up as part of the gang, along with the leader’s language teacher girlfriend, a belly dancer, and a borderline psycho who appears to have been released from jail thanks to some dodgy cop business involving a big parcel of dope. (Sadly, it looks like the only word of Arabic I can ever pick out of movie dialogue is still ‘hashish’.) Even the cops who were initially taken in by the hash sting eventually become part of the gang too, somehow or other.

There are plenty of other daft characters and even dafter situations woven into what seems at heart to be a straightforward caper movie. But what holds it all together is the performance of tall, just-wonky-looking-enough Omar Mustafa Metwally as the gang leader. I’m so used to Egyptian comedies being headed up by overacting shouty idiots that this feels like Stanislavsky: or at least, like comic acting in a register that we would be used to back home. Sure, there are plenty of broad visual gags and lowbrow humour, but I get the impression that there’s some verbal wit in there too. It’s an impression obtained purely from the speed and confidence of the delivery of the dialogue, by Metwally in particular: and if that’s all it takes to persuade me that a film is smarter than most, so be it.

Still, it’s definitely a film that played well to a Dubai audience. They went into absolute hysterics at the climax of the robbery itself, which I’m guessing played as a parody of something else I’m just not aware of. But you know what else they found really funny? All of the drugs references. I’d imagine that other Arabic-speaking territories may be a little less tolerant of that as a subject for comedy. But perhaps the UAE’s new Minster for Happiness might want to give Ocean 14 a look and see if it gives her some ideas.