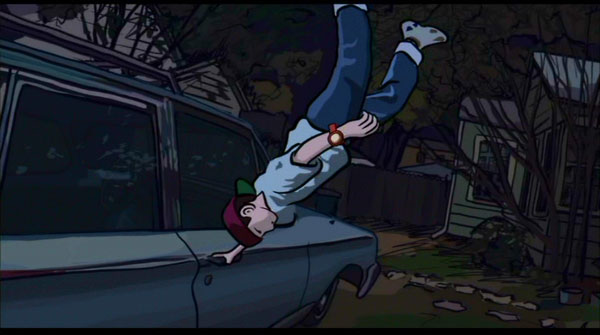 Richard Linklater’s sixth feature (or seventh if you count the unreleased It’s Impossible to Learn to Plow by Reading Books) is a reprise of his first, Slacker, and like the earlier film, it is an ostensibly unstructured daisy-chain of talking heads and walk-and-talks drawn from the seemingly endless supply of intellectuals and eccentrics (including sketchy individuals like the notorious Alex Jones) to be found in his home town of Austin, Texas. Waking Life is most obviously distinguished from Slacker by the fact that the live action footage captured by Linklater’s small crew, shooting on MiniDV, was rotoscoped and beautifully overpainted by a small army of animators led by Bob Sabiston in an ever changing cascade of graphic styles, transforming the feeling of the film from documentary to dreamlike.

At second glance, another point of distinction becomes evident – Waking Life is less unstructured than it first appears to be. Underneath its meandering and tangential surface it tells a fairly linear and conventionally-structured story similar to many other dream-driven narratives from Alice in Wonderland to The Wizard of Oz – the protagonist (in this instance unnamed and played by Wiley Wiggins) finds himself journeying through a mysterious realm, and his interactions with the denizens of the dream world gradually reveal its rules and what he must do to return to the real world, leading to a final showdown. But whereas Alice and Dorothy do get to return to the real world after that showdown, Wiley’s final confrontation in Waking Life, with Linklater himself, just leads to him waking up yet again in yet another dream, looping back to the beginning of the story.

In that final scene, Linklater (while playing pinball) tells an anecdote about Philip K Dick, after the publication of Flow My Tears, the Policeman Said, becoming convinced that all of time and human consciousness was an illusion, and that we are all really living, to be precise, in the year 50 AD. Linklater’s character allows that, while it probably isn’t 50 AD, time, consciousness (waking or sleeping) and memory are all phenomena where the instant and the infinite may as well be indistinguishable.

That’s an insight that does double duty, at once summarising the by-turns contradictory, bullshit-strewn, fascinating, wanky and piercing torrent of words that came before it, and also serving as a Rosetta Stone for the underlying cinematic metaphysics of Linklater’s whole filmography, which Waking Life now seems inescapably central to, from the reference to Dick, whose A Scanner Darkly he and Sabiston would later adapt, through the cameo appearances by Julie Delpy and Ethan Hawke, down to the presence of his daughter Lorelei, a couple of years before she would start to take part in Boyhood, his most ambitious film to date.

Another excellent package from Arrow Video. The picture and sound on the Bluray are flawless (the flat colours and bold lines of the film are naturally forgiving to video compression, but still), and although many of the extras date from the 2002 DVD release of the film (a commentary by Linklater, Wiggins and Sabiston, one by many of the animators who worked on the film, a “trivia track” by Linklater that footnotes many of the talking heads, some behind the scene videos showing the details of the filming and animation process), their presence is welcome. What’s new is a raft of short films by Bob Sabiston, showing the evolution of his style and technology before and after Waking Life – at least a couple of these films (Grasshopper and The Even More Fun Trip) are worth watching in their own right. There is also a substantial booklet with an essay by Little White Lies editor David Jenkins.