Laura Morgan reviews Eddie The Eagle, a biopic as entertainingly inconsequential as its subject. 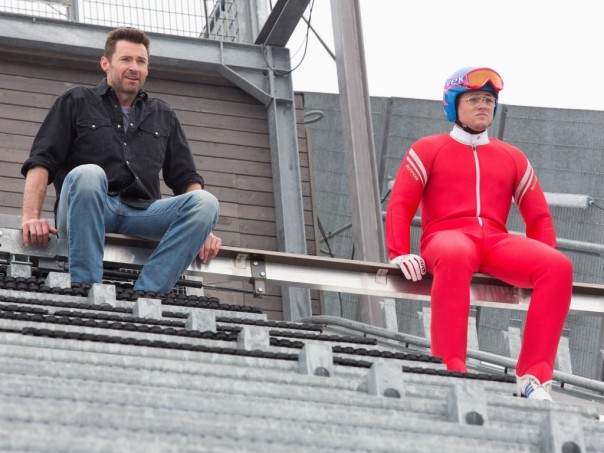 Do you remember Eddie “The Eagle” Edwards? The British love an underdog, so the cliche goes, and Eddie was the lowest dog of all: the ski-jumper who was never good enough to compete in the Winter Olympics, let alone win, but who somehow won the heart not just of a nation but of the world when he came last, twice, at Calgary in 1988. If you don’t remember Eddie The Eagle I’ve just spoiled the ending of the film, for which I apologise, but it’s best you know upfront how it really ended, because this is a film that sets us up for a glorious reversal of fortunes, and then sheepishly acknowledges that it really didn’t happen that way.

Which isn’t to say it’s not a diverting way to spend a couple of hours (actually 1hr 45m, should you need to know). Dexter Fletcher brings together a cheerful, gung-ho cast including Hugh Jackman and, inexplicably, Christopher Walken, all led by Taron Egerton – last notable in Kingsman and 2016 BAFTA Rising Star nominee – who is much too handsome to play the real Eddie, but gets around it by pulling a silly face throughout the film. That aside, he’s very good; his version of Eddie a likeable klutz who just about brings us along for the ride, despite the fact that there’s no way of telling Eddie’s story without making it apparent that this is someone who started out a bad ski-jumper, ended up a bad ski-jumper and stayed a bad ski-jumper in between. The narrative arc is a shaky one, and the cast pull out all the stops to sidestep this and dazzle us with their charm instead. Luckily, this is an entirely charming cast. 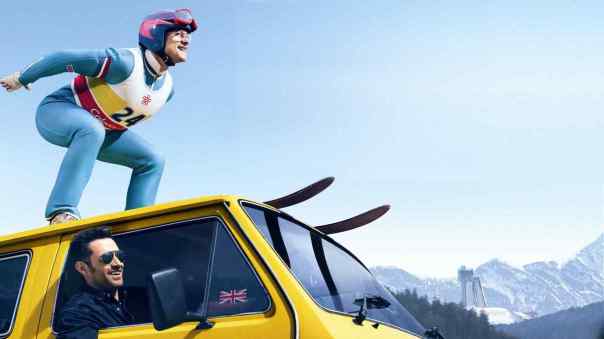 There’s a niche occupied by a certain type of British film that seems to be an unfailing box office hit, at least domestically. It’s best described as heartwarming triumph in the face of adversity featuring made-up people but set against a gritty (usually northern) background of genteelly sanitised social-political history and industrial dispute. The Full Monty (the closure of the steel mills), Billy Elliot (the miners’ strike) and Brassed Off (the privatisation of British Coal) skim the uncomfortable edges of the backgrounds against which they take place, but what we remember are the moments of glory, of happiness, of tiny humans sticking it to The Man by dancing in the dole queue and making us feel that perhaps it wasn’t that bad after all, or if it was at least we could all have a laugh, eh?

From the start, Eddie the Eagle has the feel of a film made in this mould, but closer, even cursory, inspection reveals the truth to be almost exactly the opposite. Eddie came from Cheltenham, of Ladies’ College and Gold Cup fame, rather than a smoky northern mining town. Before he was a bad ski-jumper, Eddie was a good skier. Somewhere along the line he had the cash, the time and the access to equipment and premises to make this happen. This isn’t triumph over adversity, this is fierce determination fed by massive opportunity, which is much less romantic.

And most damning of all: being unassailably real, Eddie can’t have a happy ending, because he didn’t. He can have a sort-of-happy middle, which he does, but narratively this is entirely unsatisfying. I knew what happened in Calgary but still found myself desperately hoping for a twist in the tale, because coming last is just not that exciting. The film does a pretty good job of making it a bit exciting – the jumps are filmed from Eddie’s perspective (though we don’t see them through steamed-up glasses the way he actually did) and they look super, but the peril is minimal, because we all know he didn’t land on his head and die, or even fall over and pull a muscle. The closer we get to Calgary the closer we are to the inevitable disappointing climax, where we watch Eddie jump, do a bit of crowd-pleasing fist-pumping, jump again, from higher up, grin and goof around amiably and then go home, never to reach such heights again. Eddie may have soared like an eagle, but he came down with an unremarkable bump and there’s nothing the film can do to hide the fact.

I could say that the story, such as it is, consists of a long gradual slide downhill with a brief blip of upward-motion followed by a final descent back down to earth. And I could even say that while it doesn’t begin to measure up to its competitors in the field, it’s nonetheless perfectly charming, taken solely on its own terms. But that would be terribly whimsical of me, so I shan’t.

Eddie the Eagle is on general release today.

1 thought on “Billy Elliot On Ice”