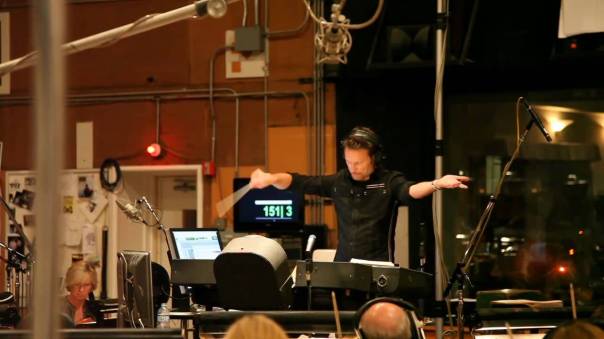 It’s not often the Royal Festival Hall is home to a concert during which the conductor shows his appreciation for the orchestra by announcing “They’re sick!” at the end of a piece. But then, there aren’t many orchestral concerts where the conductor is sporting gelled hair and a black T-shirt at the podium, as Brian Tyler does here. Lunchtime O’Boulez would not approve. But entertainment was the only goal for Tyler in his first live concert, where some of his best-known work was performed by the Philharmonia Orchestra (who’ve recorded a number of his scores, so know the territory) and an impressive line-up of soloists.

Proceedings get under way with Thor: The Dark World and we get a good overview of Tyler’s career up to and including his hooking up with Marvel. Not since the days when disco ruled has there been so much thrusting of strings and crashing of drums, not least in Fast and Furious. There is head-bopping and fist-tapping, and hopefully bonuses for the brass section following a ferocious rendition of Aliens Vs Predator: Requiem. Not as loud but just as exciting is the suite from Tyler’s work on Star Trek: Enterprise.

As effective as the big-note stuff is (and a special mention to here to the piece Tyler introduces as “four little guys from New York” – named Raphael, Donatello, Leonardo and Michelangelo), some of the more powerful moments come when it’s toned down, as with the sumptuous Indian backing for the drama Partition and the powerful solo violin work for a track from Far Cry (the video game, if you don’t know it – Tyler has written for just about every medium going).

As you’d expect from a rock concert, there is singing: not from Tyler himself, though he gets into the spirit by strutting a good deal during his lively conducting. Lori Letzler is a highlight with her vocals on Children Of Dune and the second selection from Thor: The Dark World, along with Lori Marsh joining “Madsonik” (Tyler himself) for Drift And Fall Again from current movie Criminal (the poppiest element of the night). More traditional vocals come from the Royal Choral Society on a piece from Tyler’s score for the ill-fated Constantine movie. (Which isn’t the worst thing he’s worked on, as anyone who remembers Jenny McCarthy’s horrible sitcom can attest.)

Tyler’s inclusion of John Williams’ Superman as a tribute to the maestro (Tyler is one of many who has him an idol) is an indicator of his range and helps to give a point of reference to who anyone at the concert who is less familiar with some of the material. I am less impressed, though, by the rendition of Hawaii Five-O (Tyler arranged it for the new version, and Keith Power, who scores the show with Tyler, is in the audience), without a mention of Morton Stevens, who only…er…wrote it. But that’s the only real criticism I can offer. Tyler’s music isn’t Williams-level (as he would admit) and originality isn’t always its most notable aspect (The Greatest Game Ever Played sounds a little like Tyler was asked to do a James Horner impression), but it works in context and makes for enjoyable listening with or without the addition of Tyler as a personable and entertaining host. And frankly, his theme for the series Transformers Prime is far superior to what Steve Joblonsky did on the live-action movies. The lengthy standing ovation at the end is well-deserved, and Tyler’s parents (who are in attendance) must be proud.

As Tyler says himself during one of his many ad-lib moments: “Awesome!”.