Emma Street tries not to feel uncomfortable watching a bunch of French teenagers shag each other. 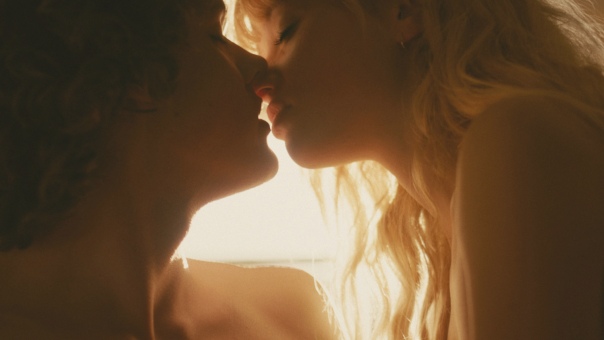 As soon as the film begins, the audience is inserted into a wild ‘n’ mostly naked party in full flow. A pretty young lady unburdened by clothing runs giggling across the lawn. The house is full of teenagers enjoying themselves in teenager-y pursuits: drinking beer, passing a bong around, fucking one another over the living room furniture, dancing to techno music… Wait, hold up there, dancing?  Has any teenager ever actually danced at a party? They do on screen all the time but actually getting your groove on in your friend’s parents’ living room seems a bit weird to me. It’s not a fucking nightclub. It certainly never happened at any of the teenage parties I went to. (The teenage parties I went to were a little less Bacchanalian then those depicted in Bang Gang, to be fair. More ‘cider and fumbling’, less ‘cocaine-snorting and free-for-all group sex’.)

The film focuses on five teenagers. Laetitia (Daisy Broom) and George (Marilyn Lima) are best friends whose friendship comes under strain after Alex (Finnegan Oldfield) unceremoniously dumps one and starts shagging the other. Alex’s mum has handily gone off to an archaeological dig in Tunisia for eight months, leaving her seventeen year old son in charge of their massive house in the suburbs. Yeah, that was never going to end not messily. Alex’s best friend Nikita (Fred Hotier) moves in with Alex in order to take advantage of the lack of parental supervision (and the swimming pool). Gabriel (Lorenzo Lefebvre) is an outsider to the group who, as it turns out, is up for a bit of an orgy if it means being able to spend time with the girl of his dreams.

We are never shown any particular reason why the teens decide that multi-partnered shagathons are the way to go. Presumably, it seemed like a good idea at the time. Which, I suppose, is motivation for anything when you’re a teenager. It starts with a game of ‘Spin the Bottle’ (doesn’t everything at that age?) and before you know it, they’ve coined the term ‘Bang Gang’ (delightfully pronounced ‘Bong Gong’ throughout) and are setting up web-pages for their #banggang activities. Because, apparently if you want to have drug-fuelled orgies these days, you need to be organised. The parties start out small before gaining in popularity with the local teenage population (and, obviously, why wouldn’t they? What sixteen year old doesn’t enjoy some sex ‘n’ drugs ‘n’ noisy French hiphop?) until we reach the huge crammed-to-the rafters mass of mostly naked teens that we saw briefly at the beginning of the film.

Once they’ve stumbled onto this invigorating new hobby, they all pretty much have at it. There are an awful lot of naked young French people fucking one another onscreen. I did start feeling like quite the middle-aged seedy pervert after a while. And Husson clearly wasn’t aiming to capture the spotty, sweaty awkwardly fumbling encounters of actual teenagers: it’s all lovingly-shot beautifully-shaped arses and flattering porny face-shots of young ladies happily being given a good seeing to.

However on the other side of the sexy sex times, there are consequences for our heroes. Online exposure, sexually transmitted diseases, shocked parents, that sort of thing. Infuriatingly, the two people who suffer the most from the fall-out are the two female characters. It’s 2016. You’d hope that a female director might be inclined to share out the shame and STIs a little more evenly. But, no, the boys are fine. Alex just needs to clear up a few beer bottles before nipping off to join his mum. Gabriel has to listen to an “I’m disappointed in you” lecture from his dad. Niki, um, has to rehome a gerbil.

It’s Laetitia and George who have to take the brunt of Inevitable Consequences . Husson claims that Bang Gang  rejects the patriarchal view that we are usually presented with and that George is emphatically not a victim. That really doesn’t come across in the story which clearly punishes its female protagonists for being the sort of girls that the Daily Mail would disapprove of. People with Y chromosomes don’t get labelled as ‘sluts’.

But happily for George despite a diseased fanny and internet-based humiliation, she manages to find redemption in the love of a good man. Because that’s what every girl needs, isn’t it? A hero to come along and save her from her poor decisions. Husson may have set out to make out an empowering modern love story but in the end, she manages to tick every sexist box there is.

George isn’t a young woman ‘confident in her sexuality’. She initiates the porny Spin the Bottle shenanigans after being rejected by Alex. She’s not a embodiment of empowerment. She’s a “ring and leave eight messages on the answerphone of the boy who’s clearly not interested in you after he’s shagged you” kind of a gjrl. Heartbroken after being used, she feels that the best way to get back at Alex is to get pissed and stick her tits in another guy’s face. I guess we’ve all been there.

Well, OK, Gabriel’s dad. No-one wants their kid to be mediocre, obviously. But I feel like you may have missed an opportunity to bring up the important fact that none of the little idiots were using condoms. The fuckwits. That’s an aspect to the whole thing that would have featured fairly heavily in my parental post-orgy conversation.

None of the teenagers really suffer any long-term terrible consequences from their summer of indiscriminate fucking, though. Even the gerbil (originally liberated from the school Science room by George) makes it out alive despite spending a worryingly large amount of the film stuck in a small goldfish bowl surrounded by clouds of weed smoke.