Folk tradition is challenged by a young pretender as Sheila Stewart and Aidan Moffat go head-to-head in Paul Fegan’s new documentary. Peter Morgan goes along for the ride. 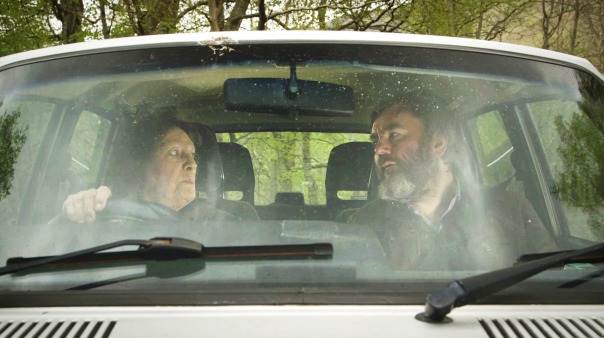 Two key people are billed in the publicity for Where You’re Meant To Be as the principals in a heavyweight culture clash. In one corner, Aidan Moffat, best-known as a 40-something Scottish singer and lyric-writer of explicit takes on drink, drugs and sex, moulded in the Britpop era; in the other, Sheila Stewart, a 77-year-old member of a Traveller family, and a singer and storyteller wedded to keeping Travellers’ folk songs and tales alive in Scottish culture. A heavyweight clash? Well, yes, there are moments when Stewart makes punchy criticisms of her younger opponent; and, yes, there is a sort of closing, sing-off ‘showdown’ between them at a big Glasgow gig. But more of that anon.

The film poses inherent difficulties for a southerner like me trying to take it in at first view. It’s the Scottishness of it: it comes from a part of Britain where its makers, its characters, and much of its natural audience share everyday knowledge and rhythms of speech (not to mention accents) that I down south am less familiar with. In a manner of speaking, the cast is a foreign country. Put simply, I missed things a Scot might have got. Please indulge me if I start by providing some contextual information (thank you, internet) that may help fellow non-Celts find this film more rewarding. For so it can be.

There’s more background to Aidan Moffat that a young Scot might know; and more to Sheila Stewart that an older Scot might. I take Moffat first, as he is the one we see most of in Paul Fegan’s documentary. Born in Falkirk in 1973, he was expelled from school at 17, and found work in a record shop. He left the job one day in 1996 after a hangover made him want to go home. In 1995 he had begun collaborating with Malcolm Middleton, a bass guitar player, and in 1996 they released a debut album with a spare, broody, backing sound to match Moffat’s downbeat lyrics. Moffat and Middleton formed the core of indie rock band Arab Strap (taken from the name of a sex-play aid, I understand), and stayed together until 2006.

Over this post-Thatcherite decade, Moffat’s themes portrayed the emptiness of a life of drink, drugs, and “fly on the duvet” (NME magazine) sexual dissonance. We are not quite in Trainspotting territory here, but we’re not far from it either. One senses an authenticity, an honesty, behind Moffat’s self-presentation, in which the lyrics, blunt and littered with casual swearing, are often spoken in a slow drawl matching the singing style. The sound grew fuller over time, drawing on indie and dance music.

But there is more to Moffat than this.  He has written an agony column for The Quietus, and he is no mean film critic either: I recommend to readers his review of The Force Awakens, on the same website in December 2015.

And there is still more. Moffat came together with Bill Wells, a Scottish multi-instrumentalist and composer from a jazz background, to release an album, Everything’s Getting Older, which in 2012 was named Best Scottish Album, the award being presented in its inaugural year by the Culture Secretary. A second album by Moffat and Wells, The Most Important Place in the World, was released in 2015. Moffat’s lyrics are more thoughtful on these albums, but still reflect themes of sex, and urban decay – with added reflections on ageing – and may still cause offence to those with more delicate sensibilities. If noir lyrics and jazzy electro-pop sound like your kind of thing, you know where to go.

So what of Sheila Stewart? She was born in 1937 in a stable into a family of Travellers. As a young child she was chosen to be a key performer of the family’s songs and stories, much of her education in this role being entrusted to the teaching of her uncle, Donald, who – as she testifies in the film – terrified her.

In 1954, a local journalist tipped off a folklorist about the family, who became known as The Stewarts of Blair, which led to contact with other folk figures, including Ewan McColl and Peggy Seeger. Recordings of Stewart family songs became popular in folk music circles both in Britain and the United States, so much so that in 1976 Sheila and her family were invited by President Ford to sing at the White House on the 200th anniversary of the Declaration of Independence, the Queen and the Duke of Edinburgh also being present.  And when Pope John Paul II visited Scotland in 1982, Stewart represented Travelling families at a major event, watched by several hundred thousand people, and sang McColl’s Moving-on Song, which is about – well – being told to move on.

She carried on singing and telling stories in later life, gave lectures on the Travelling life at Harvard and Princeton, and sat on the Secretary of State for Scotland’s advisory committee on Travellers. In an autobiography, published in 2011, she acknowledged that “the old travelling life is now slowly dying”, but had no regrets about having been born into it.  In Where You’re Meant to Be she states candidly that she is the last person left with the songs and stories her family entrusted her to remember. The line dies with her.  “It goes underground when I go underground.”

What I have not conveyed about Sheila Stewart is her riveting presence, which many who met her testified to and which you can see for yourself on film. She both spoke and sang with a rare intensity, and her singing had a fullness and trueness of sound even at the age of 77. The Traveller word ‘coynach’ was applied to her singing – the best translation of which seems to be ‘soul’.  She died at the end of 2014, after taking part in the filming of Where You’re Meant to Be.

In a roundabout way Moffat and Stewart have something in common: a rejection of conventional societal norms. Neither was a criminal. But she thought his treatment of traditional folk songs was criminal. And while she did nothing criminal, conventional society criminalised her and her family.

We join the film’s story after Moffat decided to re-write the words of some traditional folk songs, to make them more entertaining and acceptable to modern audiences. He didn’t know anything about folk songs, but recognised their place in his country’s past. ‘Where You’re Meant to Be’ is the title of a tour he made in 2014 to Scottish towns large and small, in the company of a small folk band, to see how his re-writes went down. Essentially a city-dweller, he was not sure of his reception in country villages. He sought out Stewart for reassurance, in the hope that she would like what he was doing. She didn’t. The tour was filmed by Paul Fegan (directing and producing), whose 2012 debut documentary Pouters, about people who fly pigeons (yes, ‘fly’, not ‘race’), won a string of awards.

The promised titanic clash forms only part of the content of the film. For much of the time the camera follows Moffat as he travels from gig to gig in the band’s van, and as he performs. Sometimes we are on board a boat: the isles of Lewis and Skye are on the itinerary.

Various little episodes pass before us at each stop, without obvious relation to the ‘clash’. The camera dwells on a dog penned up in an old-fashioned red telephone booth in a village; the dog’s owner explains that it’s necessary to stop him from chasing the cars. We find ourselves at Loch Ness, where a local man called George has made a large fibreglass model of a hump that he put in the loch and photographed, to help keep people interested in Nessie. At another stop, Moffat and the woman who plays fiddle in the band find themselves listening to a local man of 78 who – in a moment of real poignancy – tells them how he found the courage to propose to the young woman who became his wife. Now that she’s dead, he finds the hardest thing is getting up in the morning. In a startling sequence, Sheila Stewart skins a rabbit at a sink while talking to camera in a monologue on her life. The band’s van breaks down and has to be rescued by a tractor. In a rural shot, a dog shepherds cows. And on a hillside Moffat, in mediaeval armour, joins in with a battle re-enactment group, though more in horseplay than in earnest.

In terms of the promised clash, it’s interesting that we only twice see Aidan Moffat and Sheila Stewart together. The first time takes place in a car which she is driving down deserted country lanes. He explains that he is hoping to re-write some of the verses (not the choruses) of traditional folk songs. She asks him to sing his version of one. (It’s called Health to the Company, and we hear it a number of times, as Moffat performs it at his various gigs, including the final showdown gig in Glasgow – their second meeting – where first he and then Stewart sing it.) In the car she tears him off a strip: “You changed the verses. And That’s Not On!” He tries to argue that some change is allowable. “Never heard of it!” she says sharply.

For the rest of the film, up to the showdown, the clash is chiefly carried on through separate monologues, with Moffat confiding his arguments to the microphone, countered by short recorded interjections from Stewart. For a while after the argument in the car, Moffat is worried that he will get a reception like Stewart’s from his gig audiences. He sings Health to the Company again at a gig, and reflects that the audience enjoyed the bits he didn’t change. In one of Stewart’s interjections, she concedes that over time, singers do change the words of traditional songs, but, she implies, in a minor and acceptable way – not the wholesale urban acculturation of them that Moffat is attempting. He, meanwhile, is soon back on familiar form with a sexually robust song about a village in which everyone swings, a typical line being “Who’s up me now?” It raises a few eyebrows but gets huge applause at the end. But still, Moffat wonders whether Sheila was right: the folk songs don’t need him.  At a big gig in Aberdeen he tells the audience that the tour has taught him that he’s a city sort of person. The country is nice to visit but he likes comic shops and wi-fi.

And so to the showdown at a gig at Glasgow Barrowlands. Confident with the large, young audience, Moffat sings a song about a cardinal’s opposition to gay marriage. Then comes his finale, which as ever is Health to the Company. We have seen Sheila Stewart prowling around backstage, looking uncomfortable, during Moffat’s earlier number. She does the same while he performs his version of the final song which is greeted with sustained vocal applause. Then it is her turn. “This is the original version”, she announces. More cheers. She sings it, and is greeted with sustained vocal applause. And there we have it. You will have to bring your whoopometers along to try and decide who won.

Peter Morgan is a former civil servant. He sings folk music and is slowly learning how to use a mobile phone. Where You’re Meant To Be is in UK cinemas from Friday June 17.