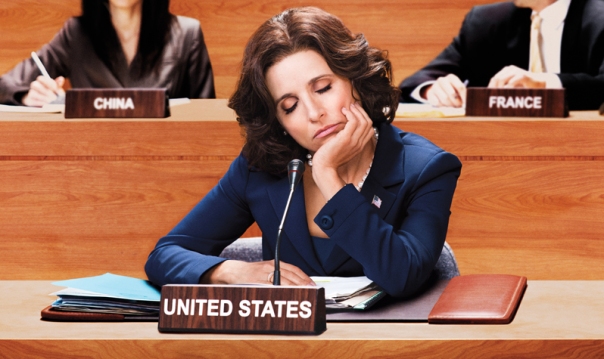 As the triumphant fifth season of US sitcom Veep ends with the ‘sit-’ scattered to the political winds, Ricky Young traces how things got there, and the oddity that is its continued success.

Political satire is, of course, a load of old pointless dogshit that generally doesn’t do anything. Peter Cook perhaps said it best – “What, eighty-five grand for four weeks’ work on Supergirl? FUCK ME, where do I sign?”

No, what he actually said was “The heyday of satire was Weimar Germany, and look how it stopped Hitler.” – and glib as it is, it’s hard to disagree.

Our own current cabal of piss-takers –  be they lantern-jawed Trots, sloppy-mouthed midgets or bearded Scotch arseholes – haven’t managed to stop the last six months descending into outright farce, the Government leadership contenders gazing out of the Graun front page with the listlessly hungry gaze of a cruise-ship swingers’ club, or the Opposition consisting of a bunch of ants arguing with a mysteriously invincible scarecrow.

But what about Yes, Minister, you may cry! That was good! It still gets shown now!

It was – and if you watch Yes, Minister today, it means two things – one, that perhaps its continued (if creaking) relevance shows that satire copes better if you laugh at the systems rather than the personalities. And two, that you’re watching BBC2 in the middle of the day, and maybe you should think about getting a job. Your children don’t have any shoes.

In 2004, in a fancy-dan version of a clips’n’cunts show that was Britain’s Best Sitcom, Armando Iannucci went to bat for Yes, Minister (it came 6th), rightly noting that a few dull men talking to each other in brown rooms could kick the living shit out of the institutions of state with a viciousness that bordered on psychotic, while still being perfectly safe for BBC2. Not that it changed anything at the time, mind, apart from warning (or arming) a previously unaware generation as to what you could actually do with words. And by ‘what’, I mean ‘who’, and by ‘do’, I mean ‘fuck over’.

While being right, Iannucci’s praise had motive – he was planning what would become The Thick Of It, and it premiered on BBC3 in 2005 in two sets of three episodes – a nasty, faintly grubby but hugely funny update to the Yes, Minister concept, with an inept minor government minister and his staff failing to get anything of worth done, the occasional steering by patrician overlords replaced by a mental Caledonian stringbean from the PM’s office. Not much had changed in thirty years, except that now everyone was even more awful.

The reaction to these six episodes being enthusiastic – rightly, because they were great – it was recommissioned for a pair of hour-long specials two years later. However, the format was unceremoniously jolted out of its path when the lead actor, Chris Langham, became unable to continue in the role for reasons we shan’t go into here. 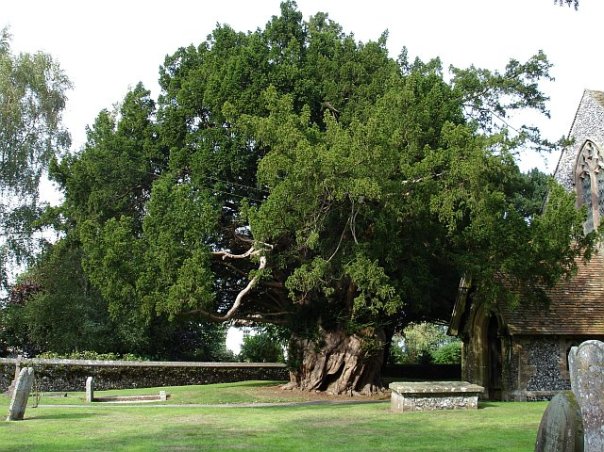 Peter Capaldi’s bristling No.10 enforcer was thus hurriedly promoted to the lead character, which was unfortunate, as Malcolm Tucker didn’t actually have a character, wasn’t ever designed to have a character, and despite being astoundingly magnetic and charismatic, never actually ever ended up with – that’s right – a character.

The two specials held a mirror to that strange period in politics where people actually thought Gordon Brown was mentally fit to hold high office, and for all The Thick Of It perhaps lucked into a sliver of prescience, from then on the bigger budget and fawning column inches turned the show’s head from satire that seemed to work into a kind of ongoing and mildly unbearable State Of The Nation commentary, only with better swears, and insults that never stopped sounding slightly too well-prepared for their delivery. Whenever Iannucci popped up with an opinion somewhere (and he popped up a LOT), he never said anything you could actually disagree with, but that never stopped you from really, really wanting to.

In 2009 a perkier third series hit BBC2 with a new minister and an expanded-upon Opposition, and told a malice-through-the-looking-glass version of the end of the Brown Era, while in 2012 a tired and downbeat fourth run flipped the departments around, with Tucker and crew now impotent in Opposition, and their rivals forced to work in coalition with a jumped-up junior party filled with daydreaming fuckpumps. Imagine that!

As this kind of analogue-laden satire often does, The Thick Of It ended with a whimper, not a bang; a Leveson-style enquiry putting Tucker on trial for being a vapid, echoing, morality-eschewing void. The show-makers might have thought it drama, but it was nothing the viewers didn’t already know.

BUT, in the process of turning the early, good version of The Thick Of It into the later, less good version, Iannucci and his extensive team took the concept, changed it around a bit, shook up the cast, sent parts of it to America and made a standalone movie, 2009’s fairly successful In The Loop. Friends, colleagues and contacts were obviously made, because after an earlier bruising (and failed) experience with a US network version of the show, cable-channel HBO’s offer of a series deal came through with Veep. Which was The Thick Of It, only funnier, faster, tougher, and better.

And that’s not even the best bit. We’ll get to that later.

Veep premiered in 2012, just seconds after Melisandre plopped out a hideous fanny-demon on Game of Thrones.

With largely the same British production staff transplanted to create what looks like an American programme, if you squint it’s the same sit- (an inept figure in a worthless position under a never-seen boss and surrounded by hapless, scheming, untrustworthy staff tries to do their job, but is repeatedly derailed by circumstance, power-broking and everyone being terrible, terrible people), but the -com is now injected with the cream of Yank improv-hardened talent.

Julia Louis-Dreyfus stars as Vice-President Selina Meyer, a blue-blood political lifer having failed her way into the job, and the first season ploughs familiar ground, if now at a dazzling pace and with much better bridgework. If British audiences had pretty much suspected their leaders were dunderheaded nutcases held together with pettiness and spite all along, to Americans, where respect for offices-of-state is baked into their system, it came as quite the shock.

To say that the characters in Veep are flawed would be an understatement – Selina herself is a hot, dissembling, self-regarding, occasionally-brilliant mess, and Louis-Dreyfus fills every glance, aside, whisper, threat, quip, comeback and torrential ball-of-hissing fury with life – but unlike in The Thick Of It, they actually are characters.

The first two seasons chart the VP’s struggle to be relevant within the administration, adding ringers like Gary Cole and Kevin Dunn to the mix to round out the young central cast, all the while painting the US system to be as pointlessly deranged as our own.

Things took a dip in series three (US sitcoms and trips to London just never, ever mix well), but rallied towards the end when Veep – spoiler alert – took a leaf out of Yes, Minister’s book, only this time not bothering to change the title of the show. Newly emboldened, perhaps by the decision that this one would be Iannucci’s last, season four mirrored the end of The Thick Of It with a special enquiry-based episode (only funny this time), and a what-will-happen-now? cliffhanger.

HBO, unlike relentless-scourge-of-the-establishment Iannucci, wasn’t done with his creation yet.

He’s got a point. Well, I’m sorry, Armando, you’ve had a hand in so many things I’ve loved over the years that I can’t be *too* gratuitously mean at your expense. But even you’ll agree that Veep only got properly brilliant when you left, eh?

In an unexpected move HBO hired former Seinfeld writer and Curb Your Enthusiasm producer David Mandel to keep Veep going. Hearts sank, of course, as in telly, extremely personal projects being taken over by a completely new team between seasons is rare, and doesn’t always end well.

Well, sod that. Whatever magic new broom Mandel brought to the production somehow made a great show even better – the plotting, left in a Gordian Knot by Iannucci, got sliced cleanly and turned into ten episodes of hilarious tension. The jokes got funnier and more profane, the insults were more natural, the satire more vicious, the characters more rounded and all of the performances stepped up from their already dizzy heights: if Louis-Dreyfus doesn’t win an Emmy for the episode titled ‘Cuntgate’, where the President Of The United States uses all of the machinery of government to find out who’s been calling her a cunt, then there’s no justice in the world.

HBO clearly knew what they had, as a sixth season was ordered before season five even aired. What it’s going to be about – Selina Meyer now no longer the most powerful person in the world, thanks to an absurd technicality – is anyone’s guess. So maybe I was wrong about what satire can do if it’s really, really good – we might be in a god-awful mess over here, but America’s upcoming elections look set to be calm, measured, dignified, responsible and the envy of democratic nations across the world. Of that we can be certain.

Ricky posts on The Tweeter