Gareth Negus learns to stop worrying and love the bomb, with the new Criterion Collection blu-ray.

Here’s a confession: I’d never seen Dr. Strangelove or: How I Learned to Stop Worrying and Love the Bomb until last week, when a review copy of the Criterion Collection’s new blu-ray arrived in the post. I should have: it’s one of those classics that you really should have seen if you’re my age and like to claim any kind of film buff status. But, though I certainly knew the salient points – multiple Peter Sellers, Ken Adam’s war room set, Slim Pickens riding a phallic bomb – I’d never got round to watching it.

I had seen Fail-Safe, the 1964 film that takes a non-satirical approach to the subject of an accidental use of nuclear weapons. Strangelove is the better known film for several reasons; firstly, because Fail-Safe’s release was delayed following threatened legal action for plagiarism, allowing Strangelove time to steal all its potential thunder; and also because Strangelove feels oddly more credible, despite its satirical tone.

Curiously, the early scenes of Strangelove feel very close to a straight drama. General Ripper, the insane soldier whose actions trigger the disaster, is a potential cartoon played deadly straight by Sterling Hayden.  It’s only gradually that the film’s absurdist edge becomes more prominent, as President Merkin Muffley (Peter Sellers) attempts to prevent the firing of a nuclear bomb.  It’s a restrained performance, more so than it might have been (some business with an inhaler, suggesting Muffley was suffering either from cold or asthma, was dropped in order to make the character seem less weak). Muffley is one of the film’s voices of (relative) reason, the other being  Group Captain Lionel Mandrake (Sellers again). The character could have slipped into any number of reassuringly patriotic British films; the comedy comes from his efforts to counter the paranoid rantings of Ripper.

Seller’s third role, as the titular Nazi scientist, is another story: it’s a far more physical performance, and one that goes so far over the top that he’s practically coming back into view from the other direction. By that time, it’s OK – the film has led the viewer to the point where this feels terrifyingly plausible. 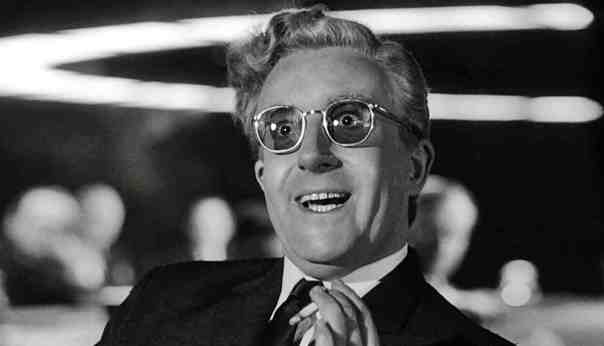 The wealth of extras cover numerous aspects of the production, and range from new material, featurettes produced in 2000 and 2004, and some from the time of film’s production, including clips of what would now be called the EPK but probably wasn’t then.  There are brief documentaries that place the film in the context of the era’s politics, and Kubrick’s career, as well as a longer ‘making of’, Inside Dr Strangelove.

I imagine that those of a technical bent will relish the interviews with cinematographer Joe Dunton and camera operator Kelvin Pike. I was more interested in the detail about how the film’s tone was arrived at. There’s some dispute about how this was achieved.  In Inside Dr Strangelove, the late Alexander Walker states that Sellers improvised much of his dialogue on set; but elsewhere, film scholar Mick Broderick claims that the dialogue was largely present in the script, and the improvisation was largely a matter of delivery over multiple takes.

While there’s repetition across the disc (when a voice over solemnly states  “What few people know is that Sellers was originally supposed to play four parts…” it’s hard not to roll your eyes – we’ve been told this numerous times already), but that’s hard to resent when there’s so much fascinating stuff included.  It becomes clear that the film could have ended up in any one of several different forms.  Initially a straight thriller in the manner of the source novel, Red Alert, Kubrick broached the idea of turning it into a comedy mid way through the process of adapting it with author Peter George, who was delighted.  (Despite this, the film still hews closely to the novel in structural terms, the only major addition being Strangelove himself.)

Even once shooting had begun, the film could have gone in many directions.  What would it have been like had Sellers played Major Kong, as had been intended?  What if Kubrick had used George C Scott’s straight line takes, rather than those where he was encouraged to go over the top?  What if the climactic custard pie fight had been left in?

There’s also the little snippets of information that stay with you; like the fact that Kubrick earned George C Scott’s respect by repeatedly thrashing him at chess; and, best of all, that Ronald Reagan reportedly assumed that White House had a war room that looked like the one in the film.

It’s a major film in terms of Kubrick’s career – his first as producer, co-screenwriter and director (he was also heavily involved in the editing), its success allowed him to further his goal of working within the studio system with the freedom of an independent filmmaker.  This is a fascinating release, both for the brilliance of the film itself, and for the detail of how the final work evolved.

Full details of the blu-ray can be found on the Criterion site.