Sarah Slade looks at a beautiful retread of an old theme. 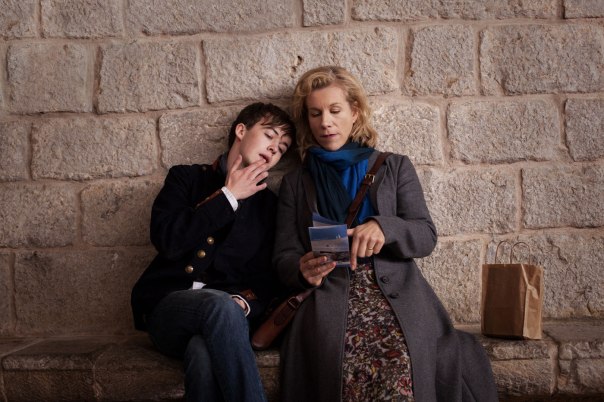 There isn’t much that is new about Departure. An English family rattle around their French holiday home, replete with colour-washed walls, Le Creuset everything and a lovely collection of china. An enigmatic stranger appears and there is a sexual awakening. Everybody goes home, wiser, sadder and ready to face the future. It’s a theme that has been explored in many ways, by many film makers over many years. You could even say that middle-class angst in Aude is quite a safe topic for first-time director Andrew Steggall, but that would detract from what is a rather beautiful, sensitively acted film.

Bea (Juliet Stevenson) and her teenage son Elliot (Alex Lawther) travel to their holiday home in a remote corner of Aude.  We learn that Bea and Elliot aren’t really on holiday; the house has been sold and they need to pack up 20 years-worth of holiday memorabilia and sell the furniture, as directed by Elliot’s unseen father. Bea is remote, adrift, paralysed with indecision and longing, and Elliot is as self-absorbed as only a 15 year-old boy can be. Dutiful, if not exactly loving, full of inarticulate lust, Elliot lives around his parents rather than with them. Bea packs boxes and cooks while Elliot roams the countryside, making observations in his ever-present notebook and posing in French bars like a ‘proper’ writer.

Elliot encounters a naked boy diving (illegally as it turns out) into the local reservoir. The boy is Clément (Phénix Brossard), straight out of French Bad Boy School: lean, dark, insolent in that “bof! J’ai pas…” way that shatters Elliot’s schoolboy reserve with a single glance. Fascinated, Elliot initiates an awkward friendship with Clément, who despite his physical confidence is only vaguely aware that he’s being pursued by this nerdy English boy and, as it happens, the boy’s mother.

So what we have here is a film about surfaces and depths. What appears to be the English middle class dream of the French countryside is a place of loneliness and decay. Lagrasse, a lovely medieval town popular with tourists, is empty and forbidding in the cool autumn light. The beautiful, capable Bea is a socially awkward, lonely woman about to become even lonelier. Elliot, the cherubic, floppy-haired innocent, is a sexual predator in embryo. Poor, confused Clément, a boy in a man’s body, grieving and isolated from his dying mother, doesn’t stand a chance. The film’s dénouement reveals a long-standing deceit that finally shatters the family shell.

Clement’s role is to plunge Elliot and his mother into the depths, to make them acknowledge both the awfulness of the present not by comparing their lives with his (pointless because the kid is if anything more miserable than Elliot and Bea), but to encourage them to face what’s coming with a Gallic sneer rather than turn away and pretend it isn’t happening.

The film is most successful in the way it uses silence to convey a mood, moving from the boys’ companionable quiet to the oppressive tension induced by the arrival of Elliot’s father. The cinematography, too, makes full use of the glorious autumnal colours, contrasting Elliot’s antique military jacket with his father’s modish fake fisherman’s sweater – both presenting a facade at odds with their true character, the oppressive gloom of the kitchen at family suppers, Elliot’s blue bedroom, echoing his underwater dreams.

As a conventional film about awakening, Departure works beautifully. The countryside is gorgeous, the house straight out of a Toast catalogue, the leads well-cast and well-acted, the story intriguing despite its familiarity. Phénix Brossard does a lovely job of humanising his role as a plot device while maintaining a feline swagger reminiscent of a young Keith Richards. Juliet Stevenson brings a brittle strength to Bea, while Alex Lawther brings an almost luminous beauty to Elliot.

Somebody once described a film under review as an “afternoon movie”, meaning something undemanding that held your attention for a couple of hours, and then on you went with your life. This is a Sunday evening BBC4 movie; pretty, well-written, good acting and with a bit of social commentary to mull over with your Merlot.

Departure is a Home Entertainment release from Peccadillo Pictures on DVD and VOD on 26 September. If you’d like to win a copy of Departure on DVD please email editor@mostlyfilm.com.  The first email to arrive wins.