In the director’s statement for In Pursuit of Silence, Paul Shen says that rather than encapsulate “the ineffable qualities of silence” he set out to mimic “our experience of the world when we are still”.

So what the hell does that mean? How do you portray silence on film? Even the ‘silent’ films of pre-talkie days were accompanied by a piano or small orchestra, or the gentle flutter of film passing through the projector. Besides, they were full of sound and fury, of action and dancing and flying pianos. What actually constitutes silence?

Shen begins with long, static shots of beautiful landscapes. No dialogue or music, just whatever sound happens to be around. It’s quiet, but you’re aware of the wind rustling through leaves, or of distant traffic. There’s a man, walking along a highway, dragging a trolley behind him. He stops and displays his notepad. He has taken a vow of silence and is walking across America. I would have been happy to follow him around for the next 90 minutes, watching the bemused reaction of the people he meets, and find out how he manages to get food and shelter (and fresh stationery supplies) with nothing but a Sharpie and an air of gentle eccentricity. Instead a woman speaks about the nature of silence in the modern world and her voice after all this quiet makes me jump.

The film takes on a meditative structure for the first 60 minutes or so. Interviewees spend a minute in silent contemplation before the interview begins (during which time they’re filmed, looking down, looking into the distance, or looking at the interviewer). There’s a discussion of John Cage’s seminal work on silence, which he performs in a New York street but again, it’s not really silent. Even the concert performance isn’t silent; you’re almost painfully aware of the audience breathing and fidgeting, but everything, for four minutes and thirty three seconds, is still. Silence, we learn, is not just absence of noise, but stillness. 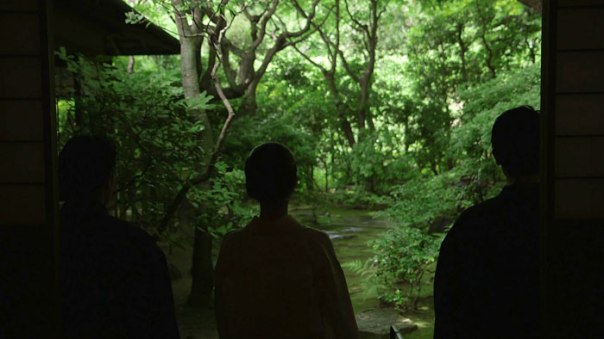 The last half hour changes the tone slightly to look at how technology could help.  Noise readings are taken in noisy places, a director of an agency that specialises in “optimising sound to improve sales and productivity” talks about the benefits of a peaceful working environment, though nobody seemed that bothered about helping the New York school where the ambient noise regularly reaches unbearable levels.

The central thesis, such as it is, seems to be that modern society has made it nearly impossible for people to experience stillness and the psychological and physical benefits it brings. However, apart from an odd interlude on how modern manufacturers are making dishwashers and washing machines quieter, there isn’t much on how people find silence and stillness in their daily lives. We can’t all set off across the USA with nothing but a rucksack and a notebook, and waving a noise detector around doesn’t really enhance one’s experience of the Northern Line.  I got slightly annoyed by interviewees making pronouncement after pronouncement about the benefits of stillness and yet offering not much support on how ordinary people can achieve stillness in their daily lives (aside from buying quieter white goods).

Ultimately, the meditative shots were lovely, but the human stories were what interested me most. And the problem is, the people who chose silence couldn’t tell us why they made that choice because…well…because it would have made for a lot of reading, which doesn’t do well on film.