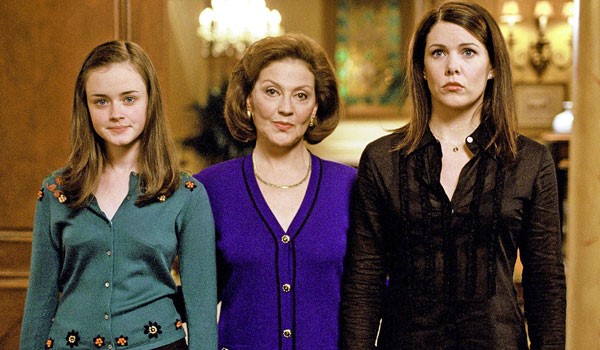 Like a lot of people, I suspect, one of the few glimmers of light I’ve been looking forward to in the ablation cascade of bad news which has been 2016 has been the prospect of this month’s Gilmore Girls revival.

Gilmore Girls was always a show unlike any other.  Arriving as it did in the early days of Peak TV  (the first season appeared in 2000, just after the Sopranos ) it never had the critical praise it deserved, being too frothy, too unserious, too – let’s be honest – girly to stand comparison with the behemoths of the HBO/AMC era that surrounded it. 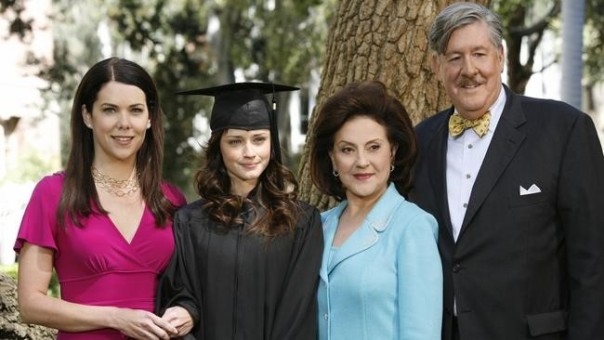 All of which is a shame, because Gilmore Girls was, for most of its original run, the most simply pleasurable show of its era.  Ostensibly it was a family soap, following the various professional, academic and romantic entanglements of 3 generations of the Gilmore family – single mother Lorelai (Lauren Graham), her preposterously bookish daughter Rory* (Alexis Bledel) and her patrician parents Emily (Kelly Bishop) and Richard (Edward Hermann) – the show spiralled out to build a complete and utterly distinctive world, centred around the New England village of Stars Hollow.

As the plot looped on and on, taking in Rory’s journey through high school and Yale, Lorelai’s endless war of attrition with her overbearing parents and more ghastly boyfriends than the complete works of Jane Austen, the real action was always in the accretion of detail around Stars Hollow, a town built around entirely recognisable buildings in the Warner Brothers back lot (the inn is the Waltons’ farm, for example) and populated with a rotating cast of eccentric characters. 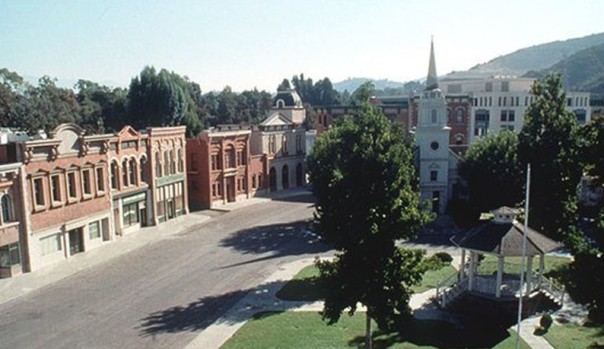 What made the show so entirely charming was the cast (aside from the central ensemble and the various background locals, Gilmore Girls was Melissa McCarthy’s breakout role and, for my money, the best work she’s ever done), the endlessly funny high speed dialogue, and the perfectly targeted off-kilter cultural references the show dropped throughout.  Proper screwball comedy dialogue is one of the rarest things to see done well in modern TV, and only The West Wing ever came close to the amphetamine fizz of prime Gilmore Girls.

The other reason I’ve been so keen to see the revival is the thing that really made the original show stand out in the era of the Sopranos, the Wire, Deadwood and Mad Men; the fundamental optimism that ran through every episode of Gilmore Girls. Every character (even Rory’s feckless arsehole father Christopher, though it pains me to say it) was fundamentally decent, well meaning and kind.  Though emotional pain, frustrated ambition, hurt feelings and resentment flowed through much of the series, the overall message was always of hope, or at least of kindness.

All of which helps explain how I ended up ignoring the demands of home and family and devouring six hours of the Netflix revival over the course of two days.  The rise of the late revival has been one of the more interesting TV trends of the past decade, but the onscreen results have varied.  Gilmore Girls had the advantage of time to play with and a lingering sense of unfinished business (when creator Amy Sherman-Palladino left before the last season, she teased fans with the claim that she’d already written the last 4 words of the show that would now never be used).

Almost the entire cast of the original show have reassembled for the revival, with the sole exception of Hermann, whose death in 2015 overshadows the entire show, and also enables, to my knowledge, the single most moving Spinal Tap joke in TV history.  While the core cast are still as sharp and funny as ever, the background characters are split between those whose careers have taken off and are thus only available for minute, carefully seeded cameos (though McCarthy’s return as Sookie is one of the real highlights of the show) and those who appear not to have acted at all in the intervening decade and, in some cases, to have entirely forgotten how it’s done.

After an awkward start the six hours float by, taking in the same mix of high emotions, brilliantly observed cultural gags (there’s a setpiece on the subject of Wild which will prevent me ever reading or watching the original) and awful, awful boyfriends that made the original such an endless delight.  Some of the hanging questions from the original run were answered while others, such as “exactly how bloody rich is Emily Gilmore anyway?”,  are still mysteries, and the final four words made for an entirely satisfying and inevitable closure.  There are flaws, as the long running time allows some of the more whimsical elements of the show to outstay their welcome, but overall spending a weekend in a town the show itself describes as being “inside a snowglobe” left me feeling like maybe things couldn’t be that bad, after all.

*Which is apparently short for Lorelai.  Yeah, me too.

Gilmore Girls: A Year In The Life is currently available to stream on Netflix UK