The year 2016 was a big one for movies about jazz, it seems. Before the release of La La Land (where Ryan Gosling saves jazz from Death By John Legend), Don Cheadle’s Miles Ahead was released in the UK in June, followed closely in July by Born to be Blue. MostlyFilm’s Sarah Slade counts beats to the bar and claps the rhythm for both films

Born to Be Blue ‘reimagines’ the life of Chet Baker (Ethan Hawke), a jazz trumpeter who enjoyed huge success in the 1950s and early 60s, fell in and out of prison for various drug offences in at least three countries, and temporarily lost the ability to play music around 1966.

The film concerns itself with a period in the late 60s, when Baker lost his ability to play the trumpet after a severe assault that knocked out his front teeth. The physics of trumpet playing means that any change to a musician’s teeth will change the sound they make (usually for the worse). Hawke as Baker has to practise in the bath, blood pouring out of his mouth, wincing as he tackles a particularly tricky run of notes, and slowly, oh so slowly, regaining his groove. After a slightly discombobulating start, where a nightclub scene turns out to be a film set, and Baker’s disjointed mumbling is him improvising his first taste of heroin, the film settles into a standard redemption story. Chet falls, Chet rises again, and the final scene presages his ultimate decline and death in 1988.

Hawke’s ageing good looks make him almost too perfect to play Chet Baker. He’s all cheekbones and pleading eyes – a charming, whimsical distrait genius. He coaxes and wheedles his way into the life of a beautiful actress (Carmen Ejogo) who looks alarmingly like his ex-wife (she plays both), persuades a producer to help him relaunch his career and charms a hard-nosed probation officer into taking a fatherly interest in him. He finally gets to play Birdland by basically whining at Dizzy Gillespie until the poor man gives in. Yet Hawke also manages to make him not quite trustworthy, hinting at a violent temper lurking below the surface. Maybe it’s the eyes, constantly shifting, always slightly out of focus unless he’s playing, but you get the impression that Hawke’s Baker isn’t such a sweet little lost boy after all. 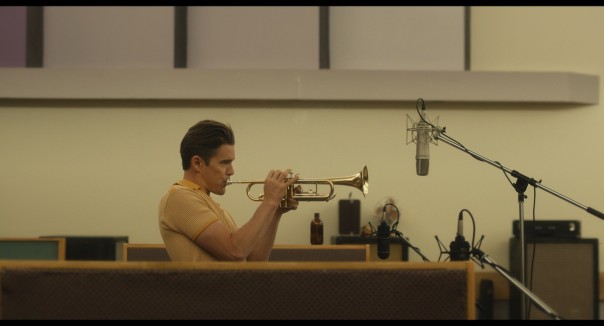 “Who do you like better? Me or Miles Davis?” is Hawke’s first coherent line in Born To Be Blue, setting up a principal plot vein, that of Baker’s rivalry with Miles Davis over who is the best improviser. There are similarities: both are young, talented players with a crushing work ethic and genius for improvisation. Baker was the Californian white boy who, with saxophonist Gerry Mulligan, invented West Coast Swing – pared-down, achingly tasteful and good for dinner parties. Miles Davis and Dizzy Gillespie personified the frenetic colourations and musical explosions of East Coast jazz. Both had their roots in the bebop scene of the 1930s and 40s. Both played with the king of bebop, Charlie Parker. But Baker sang fragile love songs and looked like James Dean. Miles was black, wiry, and played the trumpet like a grumpy angel. Who was bound to be more commercially successful in 1950s America?

Interestingly, the costumes provided visual clues to the musicians’ inner states of mind. Miles Davis was famously obsessed with clothes and Miles Ahead gives him a gorgeous wardrobe of coordinating shiny outfits that wouldn’t have looked out of place in Studio 54, but he still manages to look out of control, the antithesis of his sharp suited 1960s self. Hawke’s Baker seems stuck in a film noir, all grey slacks, vests and braces, his hair slicked back with enough grease for a fry up, trying to regain his past glory. No wonder the nostalgia-hungry 80s loved him.

The racial politics of Baker’s early success and Miles’ attitude isn’t so much explored as sketched in a couple of references to his mixed-race girlfriend. Not so in Miles Ahead. Mainly, I think because it’s a film about an African American musician by an African American director who also happens to be a jazz musician.

Cheadle’s musical background becomes apparent in the way Miles Ahead is structured. Set around 1979, judging by the width of the flares, the film concerns Dave Braden (Ewan Macgregor), a slippery journalist in search of a story that will pay his alimony. Miles Davis (Don Cheadle) is racked by cocaine addiction and holed up in a studio-cum-apartment in New York, and Braden is going to write about his comeback. What happens is a madcap series of events, starting with Davis punching Braden in the face, then roping him and a young musician into a bizarre plan to steal back his latest recordings from the record company. That’s the plot, anyway.

But, Cheadle takes a modal approach to the storytelling, treating the movie as a jazz composition. He sets up the main event, then riffs with time, flitting around Miles’ life, interspersing and blending the film’s present with flashbacks to Miles in 1940s New York (“…came to New York…met some cats…played some music”), working with Bill Evans, his fraught and often violent relationship with Frances Taylor. 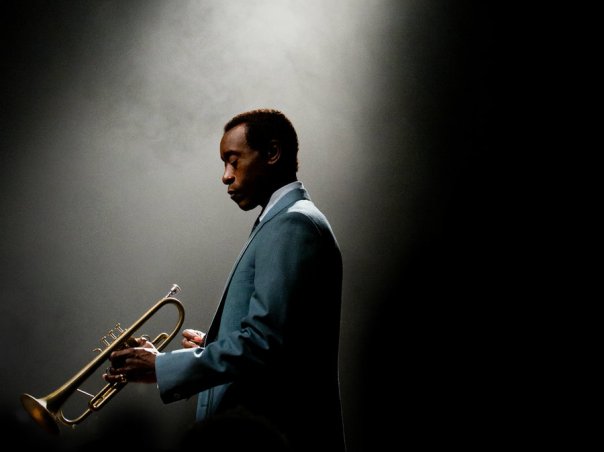 Present day Miles seems to be in a permanent state of simmering frustration. Cheadle rages, growls, prowls, punches, shoots, yet only ever actually plays the trumpet in flashback. The Miles of the past is as intense, but less angry – he even smiles occasionally. He’s collaborative, creative and full of ideas. As he ages, he soaks up new influences and new trends, pulling them into the pot and producing yet more challenging works with new, younger musicians. Yet everyone except Braden lives in fear of his temper and even his bandmates are more like captives in thrall to his genius than equal professionals. In the end, Junior, the young, junkie musician to whom the writers don’t even bother giving a third dimension, helps Miles play once again, and Braden gets his story.

I’m going to return to this “jazz is dying” trope once again. Dick Bock’s character in Born To Be Blue intones that jazz is dying. Miles in Miles Ahead says, “don’t call it jazz…call it social music”. I think this illustrates the directors’ different approaches to the playing of jazz. Hawke’s Baker always practises alone, whether in his parents’ barn or bleeding in the bath. When he’s with other musicians, he produces a note-perfect performance that’s all about the solo. Cheadle’s Miles loses his creative urge as he becomes more isolated from his fellow musicians. He dabbles with technology, messes around, but nothing works until he hears a band practising in a dive bar, and has his big epiphany. Jazz is how Cheadle describes it – you can practise on your own, but you can only truly create when you’re interacting with other musicians, pulling in influences from all over the place, not letting the music stand still. The death of jazz comes when it stops moving; whether forwards into pop, hip hop and electronica, backwards into swing or sideways into an LA dinner party. It’s social music after all.