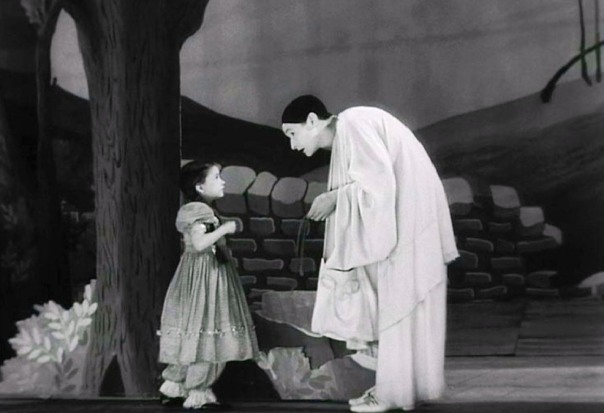 I dreamed of impossible things… ‘but how could they be impossible, since I was dreaming them?’ asks the mime Baptiste. It’s a line which captures the essence of Les Enfants du Paradis, a film which circles around the opposition between dreaming and life, illusion and reality.

The idea of making the film may have originally seemed an impossible dream: a film involving a cast of thousands of extras, a mile-long set representing nineteenth century Paris, with various cast and crew members who were Jewish or fighting in the Résistance, to be made in German-occupied France in 1943. Film stock was rationed, and shooting was repeatedly delayed – Carné later claimed this was so that the film would not be released until after France had been liberated. The deceptions, self-deceptions and betrayals of life under occupation are reflected in the uncertainties and shifting loyalties of the characters in the film.

The film begins with an extended shot of a closed theatre curtain, over which the credits play; finally the curtain rises, but it is a deception: a velvet curtain painted on to a canvas. It rises to reveal not a stage, but the Boulevard du Temple,  itself a space for performance: acrobats, jugglers and performing monkeys vie for trade along the street packed with theatres and sideshows and filled with bustling, vigorous, raucous crowds.

The plot centres around the beautiful Garance and the four men who fall in love with her: Baptiste the mime, Frédérick the actor, Lacenaire the criminal, and the Comte Edouard de Montray. It is Baptiste whom Garance truly loves: but too shy to make love to her, he lets her drift into the arms of debonair Frédérick and then to the aristocratic Comte. Meanwhile Baptiste marries the theatre director’s infatuated daughter Nathalie, only to discover one night that Garance, still attached to the Comte, has returned to Paris and has been sitting incognito in the theatre every night to watch him perform. The two finally meet again, but the criminal Lacenaire exposes their affair to the jealous Comte.

‘How beautiful you are!’ Baptiste tells Garance, and laughing she replies: ‘I am not beautiful, I am just alive’. ‘But you are the most alive,’ he says. And Arletty is so full of life! Her face is astonishing, both tender and knowing, gentle but humorous. But her freedom and joie de vivre are not straightforward blessings: she is free, but she is also aimless. ‘A few words can change your life, madame’ the Comte tells her as he propositions her; ‘Is my life worth so little, then?’ says Garance: but in the end it is a few words, a spur of the moment decision, which leads her to accept the Comte’s proposition. A few words, but a life and death decision for her.

Dream is set in opposition to life: Baptiste, Garance’s true love, is a creature of dreams, who describes the moon as his homeland, whose face is different by day and by night. His art comes from his understanding of ‘the dreams of the little people’. In the first moments of his love affair with Garance, he tells her she has woken him for good; but towards the end of the film, when he has fallen into heartbroken despair, his wife Nathalie explains that he has fallen into sleep, that she cannot wake him, that he must be left to wake, one day, and return to his wife and child of his own accord.

If Baptiste represents Dream, Frédérick represents Art – something also set in opposition to Life. Cynical, debonair, Frédérick has nothing of Baptiste’s intensity: he maintains an ironic distance throughout, even when called upon to fight a duel. It is only when he is moved by Garance that he can rise to the heights of his art, and only after he has experienced jealousy can he play Othello, his life’s ambition. And only as Othello does he finally lose his ironic detachment.

In fact of the five stage performances shown in the film, all but the performance of Othello are disturbed by the sudden irruption of real life: the first comically, as the Barrignis leave the Funambules theatre after a row with the director and Baptiste is thrust on stage to play the lead for the first time; the second pathetically with Nathalie’s anguished cry of fear and love for Baptiste; the third in a long Pirandello-esque interlude where Frédérick, to send up his pompous playwrights, leaves the stage and declares himself to be no longer the character he is playing, Robert Macaire, but himself, Frédérick Lemaître. Reality and fiction clash abruptly, only to be resolved again when Frédérick again agrees to take the stage and finish the play: but what was intended as melodrama has now become farce. Finally in Baptiste’s last performance, hearing that Garance has returned to Paris and is in the audience, he is overcome and rushes offstage.

Only Frédérick’s performance as Othello goes uninterrupted by reality: but instead, his performance sets two courses of action into play, as Othello’s jealousy mirrors the Comte’s jealousy of Garance, and Iago’s encouragement of Othello to kill Desdemona seemingly inspires Lacenaire to murder the Comte.

While we see the stage productions head on – often in full frame for much of the performance – the dramatic climaxes of the film take place off-camera: as the Comte is murdered, the camera turns away from him towards the audience for the murder, Lacenaire’s accomplice Avril. As Garance and Baptiste finally fall into each others arms, the camera again turns away, and we experience the love-making of the famous mime only by overhearing his words.

In all the scenes of theatrical performance, the audience are as important for Carné as the actors. The camera cuts between the stage and the ever-responsive audience, laughing, shouting and applauding, or rapt and silent. These are the ‘enfants du paradis’ – paradis being French for what we call the Gods, the highest and cheapest seats in the theatre. The difference between audience and performer is blurred: Garance, Frédérick, Baptiste are audience members as often as performers, and the crowd is often the performer. In the final scene, as Garance and Baptiste are separated by the frenzied gaiety of the Mardi Gras carnival, the crowd, costumed, dancing, and singing are as much performers as the professionals in the Funambules.

Other blurrings of reality and fiction are more troubling. Robert le Vigan, the actor originally cast as Jéricho, the treacherous rag and bone man and informer, was sentenced to death by the Résistance for collaboration and had to flee France, being replaced by Pierre Renoir. Garance’s tragedy as the woman who takes things both too passionately and too lightly, who doesn’t think through the consequences of her actions but must live with them despite terrible pain – ‘When I want to say yes, I don’t know how to say no’ – is echoed in Arletty’s own more terrible story: she partied through the Occupation of Paris, socialising with Nazi officers and Vichy officials, and she fell in love with a German officer responsible for trying and sentencing Résistance fighters. At the liberation of France her head was shaved for so-called “horizontal collaboration”. For the rest of her life she never let her hair grow again.

The film ends where it began: with the thronging crowds on the Boulevard du Temple, but this time they are dragging Garance and Baptiste apart. The wildness of the scene recalls the scenes at the liberation of Paris (although the film was made before that took place), but is touched with a terrible sadness. Life goes streaming on, gaily, brutally, heedless of the private sorrows of others. Life goes on, but as Baptiste says: ‘Life, dreams, they’re the same! Or life’s not worth living.’