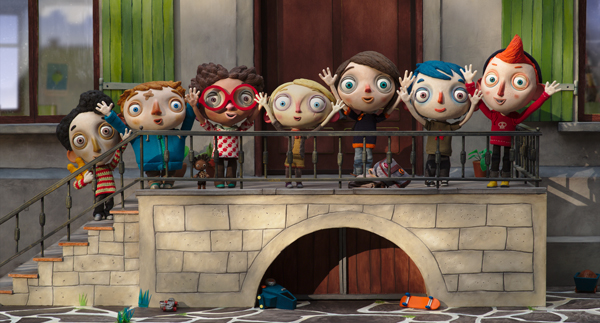 My Life as a Courgette arrived in the UK having already earned award nominations from the Oscars and Golden Globes, as well as the Cannes Festival; it also picked up a couple of Césars in its native France.  A screenplay from Céline Sciamma (adapting a novel by Gilles Paris), auteur of Tomboy and Girlhood, should attract devotees of arthouse cinema, but this delightful film deserves to find a much wider audience than that.

It is not a typical children’s film.  It’s a genuine heartwarmer, certainly, but one that deals with themes including abuse, loss and violence within the family. That shouldn’t dissuade you from going to see it, whether or not you have children.  I’m making that clear right from the start, because the rest of this review does contain spoilers, so you may want to stop reading now and head straight for the cinema.

My Life as a Courgette opens in petty brutal fashion: with its lead character, 9-year-old Icare (who prefers to be called Courgette) accidentally killing his mother. He is taken to a children’s home by kindly police officer Raymond, where he initially struggles to fit in. Shy and withdrawn, he becomes an immediate target for bullying, led by the aggressive Simon.

But things start to look up: first, Courgette wins Simon’s respect (by fighting him; not sure that’s a particularly positive message, but it’s probably realistic) and then with the arrival of Camille, a sparky girl who Courgette immediately falls for.  When her aunt attempts to gain custody of Camille, for purely selfish reasons, the children have to work as a team to keep their surrogate family together.

A lot of this material needs to be handled with a careful touch. Paris’ novel was aimed at a slightly older audience, so Sciamma (who co-wrote with director Claude Barras) hint at the traumas suffered by their young characters without dwelling on them. Dead parents are not uncommon in children’s fiction, from Bambi to Harry Potter, but the plots often have a fantasy element that distance them from the everyday lives of the viewer. The various backstories are largely hinted at rather than explored, but feel like the kind of distressing material that can be found in daily newspapers.

If relief is needed, it comes in the form of the puppet characters. With their oversized heads and cartoony yet expressive features, they are unrealistic yet reassuringly childlike. They pass one essential test of stop-motion animation: making you want to reach through the screen and play with them. The film also features plenty of comedy, both slapstick to verbal – Simon’s attempts to explain half-understood matters of love and sex are perfect.

It is Simon who provides the main emotional arc of the film. Courgette and Camille are the leads, but their story, though sweet, is less interesting. We welcome their happy ending, but much of it comes from the intervention of a kindly adult, and not every child can count on being that fortunate. Simon, instead, has to learn to create – and value – a family of his own with his fellow orphans. Initially resorting to bullying to enforce his place as alpha male of the group, he learns to accept the friendship of Courgette and Camille, before facing the hurt of having them leave. In the closing scenes, he has become a more nurturing character, and an older brother figure to the older children – and one who has apparently accepted that he is unlikely to be leaving the home. “We’re all the same,” he tells Icare in an early scene, “There’s no one left to love us.” By the end of the film, he has found the solution: to love each other.  It’s a melancholy message, but also an optimistic one.

My Life as a Courgette is in UK cinemas now, in both subtitled and dubbed versions.