When Hayao Miyazaki stepped down as head of Studio Ghibli in 2013 (his sixth retirement* to date), we wondered what now for the Japanese animation powerhouse? Answer: a Robinson Crusoe tale with a giant red turtle.

A violent storm washes a man on the shore of a tropical island. Despite multiple attempts at escape, his efforts are thwarted by an unseen force that dismantles the rafts he builds. He finally discovers the source of his problems; a red turtle. In his rage, he cruelly kills the turtle. Days pass, his guilt overcomes him and, too late, he tries to revive it. But then something miraculous happens: the turtle transforms into a beautiful woman, and the story then follows their life together on the island.

However you choose to interpret this event: death dream, hallucination, folk-tale, what we get is a beautifully drawn film, with a minimal score and no dialogue. Where sound is used, it is to great effect; like rain on bamboo leaves or the wind in the grass. We see nature in all its various forms: the destructive force that can lay waste to anything in its path, the provider of food, shelter, and warmth, the wonder of a starry sky on a cloudless night. 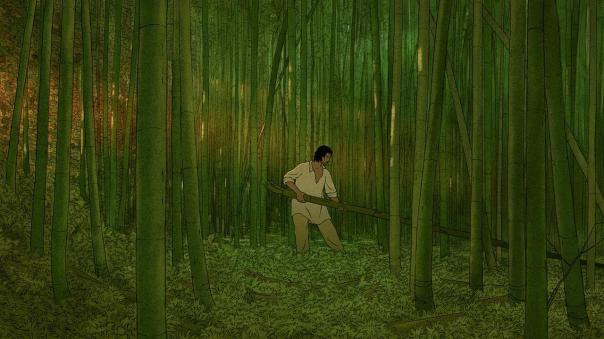 This is a film about man’s relationship with nature. Despite our best efforts to control it, and any arrogant notions that we can prepare for anything it throws at us, it can always remind us of its breath-taking power and its influence on our lives, both positive and negative.

It is co-written and directed by Dutch-British animator Michaël Dudok de Wit, and is a Ghibli co-production with Wild Bunch (who also act as the international distributor for Ghibli films).

I watched it with my children, but I’m not entirely sure they enjoyed it. Unlike most Ghibli productions which offer plenty for audiences young and old, this will be appreciated more by mature viewers. Sure, there is a magic and other-worldliness about it, and a suspension of disbelief is required, but the beautiful simplicity will be best appreciated by adults.

*Miyazaki has announced that he is coming out of retirement to work on another project for Studio Ghibli, scheduled for release sometime in 2019.