Part of an occasional series in which Spank The Monkey travels to foreign countries, watches films in unfamiliar languages, and then complains about not understanding them. This episode: Saudi Arabia and Dubai, May 2017.

There was a meme which made its way around Twitter at the end of May. It consisted of the following message, printed boldly in white on black: “YOU HAVE JUST OVERTHROWN CAPITALISM. The 10th photo in your camera roll is the new economic system of the planet.” I had a look at my phone’s camera roll to see what the tenth photo was, and it turned out to be a shot of the city of Riyadh, taken from the top of a 99 storey building. No real change there, then.

Saudi Arabia: a new country to add to the list in my passport. (Luckily, the passport I used when I travelled to Israel a few years ago has expired now.) It’s not, however, one that I can really add to the roster of Monoglot Movie Club. As you may already be aware, my chances of seeing local films at the cinema there were limited by the lack of a) local films and b) cinemas: the Saudi rulers consider movie theatres to be one of those Western fripperies that the country can do without. Frustratingly, in the months leading up to my visit, it looked like that this policy was about to be finally relaxed: but no. Cinemas are public places, and darkened rooms add a further layer of complication to the way women are segregated from men to reduce the risk of the latter catching cooties.

Television, on the other hand, is fine. Particularly if you’re staying in a Western chain hotel, which has a requirement to carry a mixture of local and international channels for business travellers. So, although I couldn’t get out to the pictures while in Riyadh, I had a solid backup plan: spend my evenings in my hotel room in front of the TV, and wait to see if things get weird.

I didn’t have to wait long.

My first day at work in Riyadh coincided with Donald Trump’s visit. This made for a dull first evening back at the hotel, because every single local channel was showing the same live feed of the Trump summit, sharing a grand total of two camera angles between all of them. The only real choice you got was between Arabic or English voiceovers. And because they were broadcasting everything as it happened, there were long periods during which Trump was sitting around waiting for the next part of the summit to begin. It was fascinating to note just how dead behind the eyes he was during these parts, when nobody was giving him the attention he craved: not even a shred of curiosity about the ridiculously ornate building he was in, or the people he was sharing it with.

Still, at least I wasn’t just stuck with Saudi television. My hotel also had access to all the major international news channels (three cheers for NHK World for allowing me to keep up to date with the sumo), and miscellaneous entertainment channels from across the Middle East. On my previous travels to this part of the world I’ve often ended up latched onto Dubai’s MBC network, and especially MBC2, which is the telly equivalent of the bottom shelf of the action films section your video shop used to have. (On one evening during this trip, MBC2 was having a Jason Statham themed night, with The Transporter 2 and The Expendables 3 separated by an interview with the man himself.) But at this particular time of year, many of MBC’s commercial breaks were more interesting than the stuff either side of them, as they were packed with trailers for the special programming coming up for those long Ramadan nights.

Most of the trailers were for big budget dramas, rather like they would be for holidays back home. But you couldn’t avoid the constant plugs for Ramez Galal, who first came to my attention when I was in Dubai just before Ramadan last year. His seasonal speciality is elaborate pranks, rather like the ones Noel Edmonds used to do, except Ramez only makes his targets think they’re going to be killed. That’s not an exaggeration: on previous Ramadan specials, he’s trapped unsuspecting people on crashing planes and inside exploding skyscrapers.

This year, we got a trailer promising a desert road trip curtailed by the one-two punch of a patch of quicksand and an eight foot long Komodo dragon. That trailer highlights two things that seem to be common to all of Ramez’s shows – firstly, the reveal of the prank is normally followed by Ramez having the shit kicked out of him: and secondly, at least one of the prankees is usually an international celebrity. Hence the brief appearance of Bollywood superstar Shah Rukh Khan in the closing seconds of that trailer. You may have certain suspicions after watching the three short videos below, and you can click on this link to find out if they were justified or not. Nevertheless, Beadle’s About would have been a lot more fun if more episodes had ended like this.

One week before my Saudi adventure, I was in Dubai again. At least I managed to see a film there, I suppose. However, the little burst of UAE film production that I noted in 2016 appears to have fizzled out again – so I’m afraid that it’s back once again to the terrible Egyptian comedies. Sadly, I didn’t get the chance to see Kalb Balady, despite its intriguing synopsis: “a comedy about a thief who steals street dogs and sells them, but ironically he learned this profession from a female dog, who breastfed him as a baby, which led him to acquire supernatural powers.” (Your definition of ‘intriguing’ may vary.)

I did, unfortunately, see Bank El Haez. The main characters are Egyptian Comedy Type #1 (a fat bloke) and Egyptian Comedy Type #2 (a curly haired bloke with glasses). They work together at a bank, getting continuous hassle from their weaselly boss. After an incident involving the rooftop consumption of hashish and an ensuing fire, the pair of them are sacked. With the aid of their mate Egyptian Comedy Type #3 (a sleazy bloke who deals in illegal substances), they decide to get their revenge in the most obvious way possible: by robbing the bank. Don’t worry, there’s a third-act twist which lets them off the hook and allows us to root for them. Sort of. 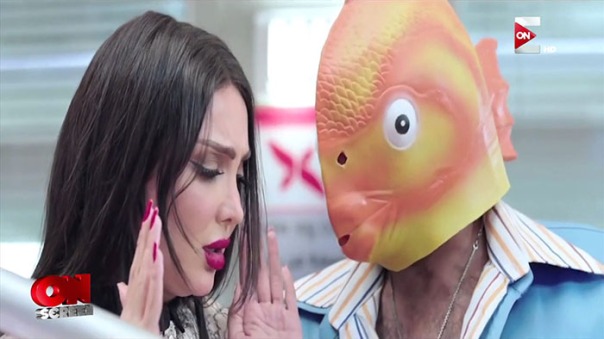 Bank El Haez isn’t going to win any prizes for originality: in fact, on the plane out to Riyadh the following week, I saw a German film with an almost identical bank-clerk-turned-bank-robber premise. This was Vier Gegen Die Bank, which marked the comeback of director Wolfgang Petersen after a decade away from the limelight. He’s a much better director than the script deserves, so despite the broadness of its comedy it’s actually rather entertaining. You can’t say that about its Egyptian counterpart, however. The comic stereotypes play out exactly the way you’d expect, everyone assumes that SHOUTING MAKES THINGS FUNNIER, and the visual gags can be seen coming from a mile off (notably the gang’s attempts to prime an experimental bomb with a leaky bottle of petrol).

As is frequently the case with Egyptian comedy movies, a Western viewer can easily end up bamboozled by the overall tone. For the most part it’s all zany slapstick and knockabout comedy, but there are several moments where it suddenly gets nasty, most notably the point where our heroes visit some arms dealers and (accidentally at first) straight up murder them. It’s a similar story when it comes to the late introduction of Egyptian Comedy Type #4 (a vampish woman with large breasts), who’s meant to amuse us with her attempts to ingratiate herself with the robbers, but ends up being casually killed off at the end for her trouble. Some of this can be put down to cultural differences, I’m sure: but it still feels massively uncomfortable to me, and not even some occasional bits of visual fun (notably an elderly security guard who ends up kicking the gang’s arses) can’t quite help the film recover from that. Watch too many films like this, and you end up thinking that the Saudis may have a point about cinema after all.