We’re in a good period for fans of Stephen King movies – The Dark Tower was released a week or two ago and a new adaptation of IT arrives next week, with the concept of a linked cinematic universe being bandied about. We decided to write about our favourite pre-SKEU King adaptations…

“Alone. Yes, that’s the key word, the most awful word in the English tongue. Murder doesn’t hold a candle to it and hell is only a poor synonym…” Stephen King, Salem’s Lot

I’m a bit like Ben Mears, I suppose: I can’t shake Salem’s Lot.

It’s hard to put my finger on why. I think it’s something to do with Stephen King’s notion of terror itself wherein Salem’s Lot functions as simply a manifestation of something graver, something more fundamental. Like the Mastern House itself – that ‘monument to evil’ at the heart of the novel – it induces a primal terror. I re-read it last year; I woke myself more than once moaning in fear, white-knuckled, clutching at the bedsheets.

The 1979 TV mini-series, directed by Tobe Hooper and starring James Mason, David Soul and Bonnie Bedelia and produced by Warner Brothers with a reported budget of $4,000,000, enjoys an odd temporal relationship to the novel. So much of the imagery has become iconic that it’s almost as if the series predates the book. Indeed, it’s almost impossible to think of the ‘Master’ (played memorably, if a little reluctantly, by Reggie Nalder) as anything other than a gigantic slaphead with awful teeth – even if in the book he’s a suave gentleman, with nary a gammy incisor in sight. The beseeching, floating undead kids were all King’s work, but somehow it’s Hooper’s Danny Glick that seems the ur-version.

Part of the mini-series power seems to come from Hooper’s intrinsic understanding first of smalltown rage and insularity, but secondly, and crucially, his understanding of despair – an emotion that infects the novel’s very structure (its bones, if you like). Yes King wants to nakedly terrorise, but there’s something existential at the heart of the Lot and in the Master’s baleful stare, something to do with the implacability of onrushing death and the essential impotence of religion in the face of pure evil. Not for nothing was the novel originally to be called Second Coming… There’s also that essential 70s – and it’s the only thing I can think to call it – grimeiness (it’s there in …Chainsaw, Michael, Dawn of the Dead, and countless others): that sour yellowing of the film stock that seems to carry sweat and stink on its very surface. Mixed with King’s despair, it’s quite a brew.

The mini-series is out there in various forms – including a couple of made-for-cinema cuts – but it’s the full four-hour version you want: the slow, unfolding drama, the miasmic despair, the stink, the sweat, the dread, oh god, the dread. Look at me teacher, look at me…

(Editor’s note; this was written before Hooper’s death, and, unedited, is as good a eulogy as any) 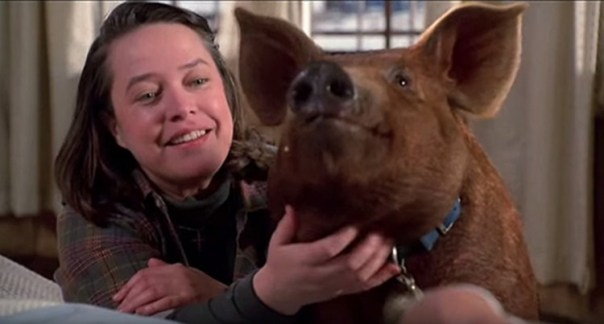 The novel Misery came out, and I read it, when I was in hospital after a car crash. For four and a half months I was strapped to the same bed, in traction and plaster, and while most of the nurses were brilliant, empathetic, patient professionals, the one who administered my twice-daily anticoagulant injections was a square-cut, over-friendly oddball the other nurses hated and made fun of. She had a loud falsetto voice and had made her own old-fashioned flouncy arm cuffs and would linger to talk for hours, and she had a fierce temper that I hardly ever saw. She once tore a scab off my face before it was ready to fall. I enjoyed the book very much and hurried to see the film when it was released.

Well, happily, I loved the film too, and appreciated Rob Reiner/William Goldman’s canny decision to make it a black comedy and the addition of the terrific sheriff and his wife characters, played by Richard Farnsworth and Cliff’s mom from Cheers. At the time I bet I identified with Paul, the writer, and I hope my back story will be enough that you’ll forgive me. I’ve killed off my own fictional sweetheart heroines with fewer pangs of regret than I’ve felt giving old shoes to Oxfam, so I know a little about how the guy feels. But Misery is about hating readers, and we are all readers, and the movie is about hating women, and we should all be women, and Annie is one of the most ur-women in cinema history. She’s thoughtful and sunny-natured and competent and she cares too much about fictional characters. Let me tell you, I would personally have kidnapped and tortured Jed Mercurio if Steve had died in the last series of Line of Duty when he fell over the cockadoody bannister. Annie is plain and plump and middle aged, which makes her worthless and forgettable, but she refuses to know her place, which is putting other people first, understanding that other non-middle-aged-women are always right. And she wins. Misery Chastain gets the fairy tale ending she deserves, and that’s because of Annie Wilkes. But sadly, Misery ends on a bitter-sweet note, as Annie fails to kill off Paul Sheldon before he’s able to write his great American novel.

Strictly speaking, my actual favourite Stephen King adaptation is The Shining but oh Christ you’ve already read enough about The Shining. That last sentence? You’re already bored of my opinions on The Shining. So here’s It. The original adaptation, not the new one. I’ve not even seen that, let alone had long enough to form an opinion. Looks good though!

Unlike this. Whoa, yeah, I don’t actually think much of my “favourite” King adaptation. It’s objectively pretty bad in most respects. Made for TV some time in the 90s, shot on crappy video, it looks cheap and weightless. The scares almost never land, the production design is shabby and the script does the book few favours. The cast varies from “ooh I know them!” (Annette O’Toole, a very young Seth Green) to “who tf is this nobody?” (Everyone else), with a stop at “THAT’S FUCKING JOHN BOY!” (John Boy Walton, sporting a genuinely terrifying 90s ponytail) along the way. Nobody is particularly great; in fact several performances are jarringly bad. And it ends with a big spider being kicked to death, which is the lamest possible interpretation of the book’s finale.

But. There’s an exception to all of the above, and you almost certainly know it. Tim Curry absolutely rules here. I don’t know if he enjoyed making this, but he looks like he’s having the time of his life. Easy to throw around terms like “iconic”, but what else can you use for his scenery-devouring turn as Pennywise? The only time this godforsaken stab at bringing one of King’s best books to screen comes alive is when Curry is onscreen – which is not nearly often enough, all things considered. He captures exactly the unhinged nature of an ancient evil masquerading as a dumbass clown, which is some achievement, if you think about it. His switches from manic jocularity to seething menace are whiplash inducing, in the best way. It’s just about possible for everything surrounding Curry’s towering performance to fade away enough to convince yourself you’re actually scared by this botch job.

1 thought on “King of the Hell”