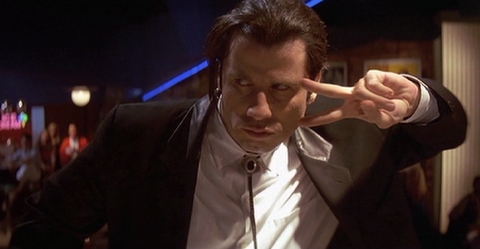 In a clever postmodern/wanky touch, this post will be presented out of chronological order.

Recently, I attended a screening of Quentin Tarantino’s 1994 breakthrough movie at the Soho Square offices of the British Board of Film Classification. Before the film, Craig Lapper, senior examiner at the board, told us a little bit about the classification history of the film at the BBFC. In 1994, with the murder of James Bulger a recent memory, that old BBFC standby, “imitable behaviour” was a contentious issue in film censorship in Britain, due in large part to fabricated tabloid reports that Bulger’s killers had had their minds murderously warped by repeat viewings of Child’s Play 3 (as quaint and faintly hilarious as that sounds now). Although the film had been passed uncut for theatrical exhibition, when it came to home video, one particular shot particularly disturbed James Ferman, who was then the board’s director: the shot of a hypodermic needle piercing the skin of John Travolta’s smackhead hitman Vincent Vega. Ferman’s belief was that there were certain trigger images that had a quasi-hypnotic effect on drug users, causing them to lose control to their addiction, and that this was one of them. Accordingly, the shot was optically reframed so that home video viewers couldn’t see needle break skin.

You may suspect that the structure of this post is an attempt to cover up a lack of substance, and you’d be right, because I don’t know if there’s much new to say about Pulp Fiction at this point. And it’s a criticism often levelled at Tarantino that the conspicuous technique of his films is there to disguise a hollowness at their core. I personally don’t have a lot of sympathy with this argument: for me, his most stimulating and most fiercely emotional film, Kill Bill, is also his most formally ambitious. But to my mind there were ways, this time around, that Pulp Fiction didn’t measure up to Tarantino’s later films – and it’s largely because that emotion isn’t there, and is dissipated for me by the anthology format, and by the jumbled time line. Latter-day Tarantino would have found a way to let Vincent Vega’s death be banal and empty, but also to ring through the remainder of the film in a way it doesn’t here.

Jack Rabbit Slim’s plays completely differently for me than it did in 1994. Back then, I just thought, yeah, novelty restaurant of the kind I expect they have on every other block in That Los Angeles. Now, it’s obvious how much it’s a microcosm of Tarantino’s method. The moment when Vincent gets lost in a little reverie of nostalgia, and has to be called back to “reality” by Mia is as close as Pulp Fiction gets to being moving. I could feel myself slipping down that rabbit hole into that dreamworld with him, and when he (defensively?) dismisses the place as a “wax museum with a pulse”, it feels like a slap in the face. The film turns that back on him when his yearning to slide down a different kind of rabbit hole with Mia is ripped away from him by the one thing they really have in common.

An echo of Vincent in Jack Rabbit Slim’s, and a foreshadowing of the formal playfulness of Kill Bill: Maria de Medeiros’ Fabienne reflected in the television screen in the motel room, becoming part of whatever lurid Z-movie it’s playing.

“Here’s a thing I learned from Tarantino. It’s called ‘copying’.”

My favourite bit of copying in Pulp Fiction is not, you know, the light in the briefcase nicked from Kiss Me Deadly, or MostlyFilm favourite Repo Man, or the bit where Tarantino told John Travolta and Uma Thurman to dance like they were in Bande à Part. It’s Harvey Keitel, playing pretty much the same character as he had a year previously in The Assassin, the forgotten Hollywood remake of Luc Besson’s Nikita. I am now working on a theory that all of Tarantino’s films contain a reference to The Assassin. When this gets out, it’ll blow everything apart.

Like, Bridget Fonda is totally in Jackie Brown. For a start.

Oh, look. This is where we came in. The reason for that screening at the BBFC was that Pulp Fiction is finally coming out in BluRay on the 17th of this month, along with Jackie Brown and From Dusk Till Dawn. The disc looks pretty good, and loaded with decent extras. Worth an upgrade, but as it’s now uncut, probably worth locking your heroin away safely before you watch it, just in case.

7 thoughts on “A Wax Museum With a Pulse”