MexFest, which took place earlier this month, was a spillover from the cultural events accompanying the Olympics this summer: a 3 day festival of film, music and visual arts at London’s Rich Mix arts centre in Shoreditch , organised by the British Council, along with the Mexican National Council for Culture and Arts.

The recent fiction features strand showed some great contemporary Mexican cinema from the last 6 years, including Abel, We Are What We Are, Deficit, I’m Gonna Explode and Revolución. All good films, but I wanted to see something I hadn’t seen before.  So I stuck with the short films, and the rare 1960s sci-fi screenings -and yes, I couldn’t help myself, the exhibition of photo portraits of Mexican wrestlers from the 1980s to the present day.

When I arrived at the Rich Mix, the sun was out and Wahaca had set up a colourful mobile Mexican food kitchen outside.  Rich Mix is a surprisingly large building, but someone has thoughtfully painted a red line on the floor which guides you from the front door through the labyrinthine corridors to the cinema at the back of the building.  Even after multiple visits, the red line is still my safety net.

I started with the fiction and documentary shorts strand, which included 2 films from the Cuarón family – Alfonso, Jonás and Carlos.  It was a couple of hours well spent.  Here are 3 of my favourites: 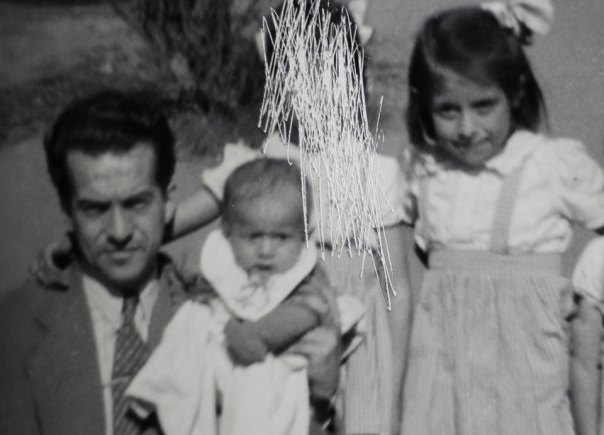 At 27 minutes, this documentary short made in 2011 was by far the longest in the programme, but also one of the most intriguing.

Director Roberto Duarte travels home to Mexico to celebrate his grandmother’s 90th birthday and find out the truth behind an old family mystery.  She lives alone, her apartment cluttered by dozens of family photographs.  As the camera picks out the portraits, it becomes apparent that two figures have been removed from every photo, scratched out, taped over or cut away.  The reason is a long held family secret and relatives refuse to talk about it for fear causing upset, and Roberto only has 2 weeks to get to the bottom of the mystery before he flies home.  While desperate to find out more about his troubled family history, he doesn’t want to lose the close relationship he has with his elderly grandmother.

A deeply personal story, handled sensitively and with access only a family member could achieve.  Roberto’s quiet, gentle conversations with his grandmother not only find answers, but emphasize the importance of passing on family history, verbally as well as through photographs.

At one point, Roberto’s grandmother complains that no one wants to listen to old people anymore, but Duarte is a patient listener.

A black comedy about a lonely travel agent called Betina who gives up everything to marry her online fiancé.  Against the advice of a friend, she quits her monotonous job and travels to a remote part of Mexico to meet her husband-to-be for the first time.  On arrival, things are not quite as expected (of course), but after an initial shock, she settles in to what seems to be a comfortable, if slightly surreal, paradise.

The country scenery is stunning as Betina treks by train, bus, truck and on foot to reach her destination.   The house and her new family appear to be straight out of a Mexican Twin Peaks.  The Gold Mine has a simple plot and a clever visual style, and a great twist ending – this is a film that has won awards at short film festivals including Palm Springs – it’s one to look out for.

A newly-wed couple, Dan and Nat (Kirsten Dunst and Brian Geraghty) wake in the middle of the night to grumbling stomachs and severe hunger pains.  After an argument over the lack of food in the fridge, he begins to think that their marriage has been cursed.  She interrogates him and he admits to suffering from a similar hunger several years ago.  Along with his then best friend, he broke in to a local bakery and demanded bread.  The owner agreed to give it to them, but only if they sat with him and listened to Wagner.  Which they did.

Although Dan thinks that was fair exchange, Nat points out that listening to Wagner is hardly ‘work’.  So they conclude that the owner must have cursed Dan and the only way to break the curse is to attack another bakery.

They head out in the middle of the night armed with masks and shotguns, looking for a bakery that’s still open.  Unfortunately, all they can find is a fast food restaurant selling burgers.

Although vague and without logic, the story (from a short story by Haruki Murakami) has a surreal and dreamlike quality.  It takes place entirely at night and in fact, afterwards, I wondered if it could have been Dan or Nat’s dream.

It’s a curiosity rather than a great film, but definitely worth looking out for and given the profile of those involved, likely to appear at more festivals.

On to the sci-fi classics (and the wrestling pictures)…

Low budget movies shot in black and white between 1957 and 1967, all 4 films were screened from pristine 35mm prints, provided by the restoration & preservation institution, Filmoteca UNAM.

After an atomic war wipes out all the men on Venus, two women (Beta and Gamma) are sent on a mission to bring back ‘male bioforms’ to repopulate the planet.  They kidnap alien specimens from all corners of the universe, but before they can return home, a technical hitch forces them to land on Earth, specifically Chihuahua in Mexico.  Their faithful robot Tor repairs the ship and guards their dangerous (and rather annoyed) cargo while the Venusians, wearing impractical sparkly leotards, run into singing Mexican cowboy Lauriano, a self-confessed liar and teller of tall stories, with only his horse, his cow and his kid brother for company.

Lauriano schools Beta and Gamma in Earth lessons of love.  Gamma falls for him, while Beta’s lusty advances on a local farmer end very badly.  Beta rebels and the chances of a successful mission seem unlikely.  It can only be a matter of time before the monster men are unleashed on the small Mexican town.

If you like old-fashioned Dr Who ‘men in costumes’ style monsters, then this is for you.  With maybe the exception of the dodgy skeleton monster, the creatures are inventive and great to watch.  Equally, the old-school sound effects and Lauriano’s musical interludes only add to the fun.

The plot becomes a little too frantic towards the end with endless running, either away from or after monsters, or back and forth between the ranch and the spaceship, but this is a hugely enjoyable and distinctly Mexican genre film.  Interesting sexual politics for 1959, too.

This was a collection of just 16 photographs dating from the 1980s onwards, showing masked Mexican wrestlers both inside and out of the ring – both posed colour photographs showing off the extravagant costumes and masks of the wrestlers, and gripping black and white action shots of the bouts themselves .  Inside the ring, sweaty wrestlers grapple with each other and it becomes difficult to recognize which limb belongs to who.  Mid-air maneuvres reveal excited audience members in the background, leaning forward on the edge of their seats.

The exhibition was only in London for 3 days, but Lourdes Grobet has several books and a website.

Towards the end of the exhibition I noticed a relaxed shot of wrestling A-lister, Santo, a name which is immediately familiar to me because he’s the star of the film I was waiting to see next (and more than 50 others).

Invading Martians interrupt a TV broadcast to ask the people of Earth to destroy their nuclear weapons, thus protecting the universe from future war and saving mankind from themselves.  They are laughed off by the Mexican TV audience who think they are watching a comedy sketch. Whereupon the Martians decide to prove their seriousness and demonstrate their powers by beaming down to a public sports event and disintegrating some of the locals.

Wrestling superstar, Santo, (El Santo, The Saint, The Silver Mask), a huge personality and one of the most popular Mexican wrestlers ever, happens to be on the sidelines coaching a boys’ wrestling team.  He spots one of the Martians and the first of many wrestling matches takes place.

The Martians are impressed by Santo’s agility and strength and they decide to kidnap and add him to their collection of human specimens.  Several attempts to capture him are made, which include dispatching seductive female Martians or swapping his wrestling opponent for a Martian giant named Thor.  But he thwarts them all.

Meanwhile, Santo teams up with his friend and scientific genius, Professor Ordorica in order to work out a counter attack.  They decide on a plan to steal a Martian teleportation belt, which will transport Santo to the hidden Martian mother ship where he can fight the Martians and save the world.

It occurred to me about 10 minutes in that there was going to be a lot of wrestling is this movie.  Fair enough – Santo was a wrestler.  If you watch a Bruce Lee movie, you expect to see a lot of martial arts.  But it did get a bit repetitive.

On a more positive note, Santo makes a great hero.  He plays it straight throughout, although amusingly, the Martians’handy teleportation belts confuse him no end, not just the first time the Martians disappear, but also the 10th, 11th and 12th times.  Even towards the end of the film he’s still desperately looking around when he’s left with an empty headlock, mid-wrestle.

This was the longest film in the strand at 92 minutes.  If they could just have cut some of the wrestling… 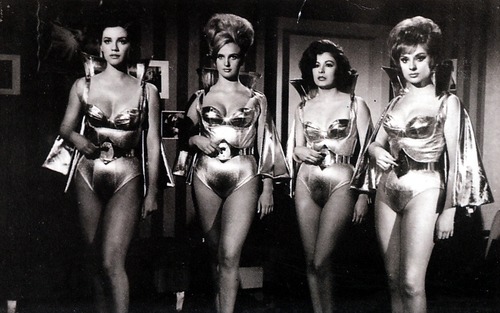 When I finally left the cinema, I walked past an aerial view of the opening night party, and like a scene from a nightmarish Twilight Zone episode, I immediately spotted a man wearing a satin wrestling mask in the middle of the dancing throng.  Panic sets in and I decide to leave as quickly as possible.  Thank goodness for that red line.