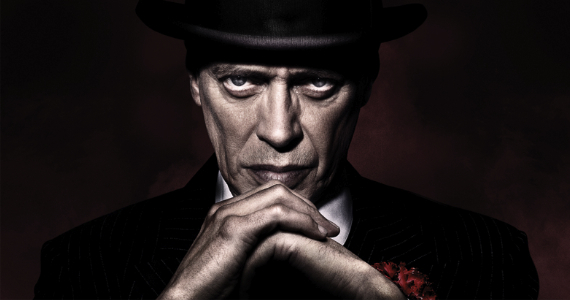 In which Ricky Young mourns for Boardwalk Empire, and decides just how much sin he can live with.

Are the greatest days of the box-set show now over? It’s the sort of question Mark Lawson might spin out to 800 particularly pointless words in The Guardian when he’s feeling uninspired and lacking a pretty intern to shout at. But Mark, god bless his fat yap, could be on to something here. With Yank telly toddling along on a diet of zombies, middle-ranking superheroes and MY DRAGONS!, when Mad Men breathes its last this summer that’ll be it for the Big American Shows That Were Supposed To Mean Something. But while The Wire, The Sopranos, Breaking Bad and others are era-locked and began to deteriorate the second their finale aired – try watching the Sopranos pilot now for a glimpse into a strange pre-millennial world you’ve completely forgotten, for example – it’ll be the big-budget historicals that will remain watchable as the years pass. There was Band of Brothers, the ultimate horrific comfort-telly. Rome, a thing of delicious bugnuts joy forever. Deadwood, the best and fiercest of them all, before David Milch went off in a huff to make shit programmes about Jesus and horses.

And then there was Boardwalk Empire, the weird brown show about weird brown people with weird brown clothes and weird brown teeth in a weird brown world.  It was born extremely noisily, and died extremely quietly. And it was nearly always great along the way. If that’s not a life-plan for everyone, then I don’t know what is.

(The ‘brown people’ wasn’t a racist crack, btw. It’s just in Boardwalk Empire, everyone was brown to some degree. All that nicotine, probably. God, they loved their fags.)

Boardwalk Empire is over now. Like so many of its characters, from background artists to a good chunk of the opening-credits cast, it got shot in the face before its time, in a giant spurt of brains and blood and hard-to-clean lead-filled wallpaper. Join me now as we bury it in an open grave and walk off, dusting down our hands into an uncertain and rapidly-changing world.

SPOILER ALERT – IF YOU ARE CONCERNED ABOUT BOARDWALK EMPIRE SPOILERS, THEN PLEASE DRINK SOME OF THE BATHTUB WHISKY DOING THE ROUNDS. AT THAT POINT, SEEING SPOILERS WILL NOT BE AN ISSUE FOR YOU.

Based on a work of non-fiction about a real-life Atlantic City official, Boardwalk Empire premiered about as big as premieres get – latter-day Sopranos big-cheese Terence Winter as showrunner, filled with big HBO names behind the scenes and a first $18m episode directed by one Martin Scorsese, who was also on board as Executive Producer – it was hard not to be impressed by the ambition on show.

The pilot was very Scorsese – freeze-frames, super-quick editing, contemporary soundtrack and lashings of deeply unglamorous violence. But once the series began proper, with Scorsese’s hands now off the day-to-day tiller, people did indeed try hard not to be impressed. Very hard indeed.

Boardwalk Empire opens the night before Prohibition became the law of the land, and follows the story of Enoch ‘Nucky’ Thompson (Steve Buscemi), corrupt Treasurer of Atlantic City, New Jersey, and his attempts to make a dishonest living beset by other politicians, the Federal authorities and various groups of criminals from other, larger cities – some of it based around the real-life actions of historical figures, some of it very much not. If that doesn’t sound very exciting written down, it’s because it’s not very exciting written down.

But that’s the strange thing. Boardwalk Empire, from its second episode, was heavily and relentlessly criticised for being slow, talky, confusing and dull. The fact that its five seasons were simply packed with incident seems to be beside the point – a combination of deadly assured direction, storylines that didn’t spoon-feed the audience, exquisite production design and an inspired ensemble cast just bursting with talent meant that the show always felt like it was taking its own sweet time, even when it absolutely wasn’t. This tended to irk reviewers, to a greater or lesser degree, but people who spend good honest time writing about television? Fuck those guys. They’re idiots.

The main bone of contention, one never fully shaken off, was that Steve Buscemi just didn’t have the charisma to lead the show, and that it needed a larger-than-life Gandolfini type to anchor the viewer rather than that little weaselly snaggletooth fella. I disagree with that completely – over the five seasons, Buscemi sold everything asked of him, from anger to humour to action to a deadly room-filling stillness that constantly proved that size isn’t everything.

But a proper ensemble cast it was, and it would take too long to sing the praises of everyone brilliant in Boardwalk Empire – look, when handful-of-episodes walk-on parts are filled with people like James Cromwell, Steven Root and William Forsythe then you know it’s a casting department on fire – but we’re going to point out a few notables, because there were risks as well as ringers, and the danger nearly always paid off.

A large part of the first two seasons concerned Jimmy Darmody (played by Michael Pitt) Nucky’s protégé, who went off to fight in WW1 and came back intent on rejoining the dubious end of the liquor business for his old boss. Pitt’s mannered acting style and hard-to-read expressions fed right into season two’s extended character study – ‘what if you’re actually too crap to be a gangster?’ – and Pitt’s exit from the show allowed  others to shine.

It’s a pity Paz de la Huerta’s turn as a showgirl Lucy Danziger didn’t progress much further than season two either. Like some deadly pink otter, she slithered around the outskirts of the programme, bewitching and repulsing in equal amounts, with a voice like nails down a sexy blackboard and a performance seemingly beamed in from Jupiter. She almost certainly had to go for the sake of the show (and, reportedly, the actress’ own mental health) but she was a character hard to forget.

(Inevitable HBO CEO Of Tits disclaimer: yes, Boardwalk Empire was awash with boobs and fannies, and it’s impossible to properly defend, although a) with a good portion of the scenes set in brothels, it would be weird not to see the odd one peeping out here and there, b) unlike the silicone spotted in places like Deadwood, these were generally era-appropriate mammaries, c) there was actually plenty of dick around for the ladies also – Bobby Cannavale’s long walk down his blood-strewn hallway with a wang like a baby’s arm gently cooling in the breeze a particular highlight, and d) the actual #1 most-visible orifice were massive gunshot wounds in people’s heads – but these are all rubbish caveats: Here Be Tits and that’s it. It’s HBO.)

She did get some screen-time with Michael Shannon’s Special Agent Nelson Van Alden however, the Prohibition cop with a face hewn from granite and a self-declared mission from God. Introduced as Nucky’s nemesis, the ultra-straight-laced self-flagellator went spectacularly off the rails in season one, and then for the next four years his scenes were either hilarious, fuckbones-insane, utterly frightening or more often a combination of all three. Like most of the characters in Boardwalk Empire, his story didn’t end peacefully, but he went out raging, which is what Nelson would have wanted.

The gangsters held their own too. Steven Graham – best known as Combo off of This Is England – provided the youthful Al Capone with enough zip and intelligence to cheer on (and be terrified by) his latter-season rise to power. And Michael Stuhlbarg, for me, stole the entire programme as childish, smirking real-life New York society gangboss Arnold Rothstein. He didn’t make it to the end either, but it wasn’t his fault – of which more later.

Two other standouts were Gretchen Mol, playing Gillian Darmody, mother of Jimmy, whose life of varying levels of abuse played out with spiralling despair, and Richard Harrow, played by Jack Huston. A grievously wounded war-veteran and Darmody associate, it takes a lot to make a character both utterly heartbreaking *and* a total bad-ass, and Huston’s instant elevation to fan-favourite was both deserved and appropriate. There have to be shout-outs to Shea Wigham, as Nucky’s younger brother Eli, whose journey through the show was a study in bleakness, and Michael Kenneth Williams, who transcended Omar out of The Wire to give bootlegger Albert “Chalky” White depths of pain and loss that he generally only needed his eyes to portray. Some feat.

Kelly MacDonald was in the programme too.

As the second series of Boardwalk Empire came to a close, with the initial set of storylines having written the show into something of a corner, the producers decided to blow up large parts of the show, cull several characters and take Nucky’s tale to different places, morally, financially and geographically. The third season saw the introduction of Bobby Cannavale’s psychotic Gyp Rosetti (of the aforementioned wang) as the main villain, while season four put him up against Jeffrey Wright’s preening, abusive Dr. Valentin Narcisse (whose wang we didn’t see, but I’m sure is as thrilling as his cast-mate’s), all the while set against a slowly evolving background of political change, racial unrest and most of the ethnically-aligned criminal groups slowly realising that hey, wouldn’t it be a good idea if we somehow got, you know, *organised*?

Now, I’m not saying this was a programme without flaws. Early episodes flirted with symbolism slightly too heavy to be truly satisfying (What, a new dress bought with dirty money gets splashed with bystander’s blood? You don’t say! etc) and a couple of plot-strands ended being tied up a little too neatly for comfort. One in particular ended up requiring a suspension of disbelief that threatened all of space and time, and so we’re not going to talk about that. But while lots of people loved their immersion in the thick, gloopy, little-portrayed 1920s’ world of Boardwalk Empire, there was never enough of them to justify the massive cost of producing the damn thing, and combined with the Great Collar-Stud Shortage of 2011, HBO announced that the fifth season would be a truncated and final one.

Since the very first episode, it was hinted that all of the main characters were connected by one fateful bad decision made by turn-of-the-century Nucky when he was Deputy Sheriff. For the fifth season of Boardwalk Empire, the decision was made to jump the main timeline forward seven years, to wrap up the stories of whomever was left (with more bangs than whimpers, certainly), while at the same time litter the last few allotted hours with flashbacks to Nucky as a boy and young man, to show the precise how’s and why’s that created the people we’d spent half a decade with. Of course this caused a few downsides (We didn’t get to see Arnold Rothstein’s death, for instance), and could be and was criticised as being perhaps absurdly self-indulgent.

Again, this was bollocks. Watching a story you thought you already knew then fill in its own gaps to reveal just how far-reaching tiny things can be as they tumble down the years was hugely satisfying, especially as the actors playing the young Nucky, Gillian, Eli etc were note-perfect in every way. And by focusing on its past so forensically, it transforms a from-the-start rewatch – as I’ve just discovered – into something approaching epic.

Boardwalk Empire ended the way a lot of crime dramas do, with the old guard reluctantly giving way to the new. In this case, we left their world just as the Mafia were about to enter it – they might be a lot of things when it comes to drama, but they’re rarely fun. The Volstead Act might have been a drag at the time, but in Terence Winter’s supremely watchable Roaring Twenties romp, there was no prohibition on that.

Ricky Young can be avoided on The Tweeter.

3 thoughts on “I’ll Meet You At Your Funeral”