We here at Mostly Film understand your problem.  You want to read the Blog, but you’re rushed off your feet; so much to do, so little time.  So what do we do?  In the classic movie manner, we give you a Montage Sequence: one handy package of compressed time with one overriding outcome: great Montage Sequences. 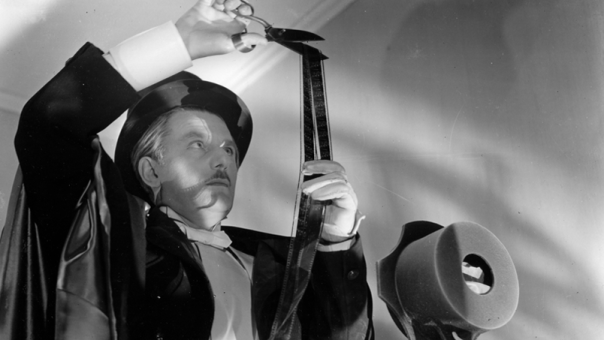 But, being Mostly Film, we’re going to go a little further.  (Cut to: medium shot of the author of this introduction, Fiona Pleasance, sitting at her desk, looking pensive).  Why is the Montage Sequence one of the few ideas to have broken out of the film production and analysis ghettos to become a generally recognised pop-cultural expression?  And why, despite its use for over eighty years, does it show no signs of dying out any time soon?

The Montage Sequence first came to prominence in American films of the 1930s,  and was a logical expression of the extreme narrative efficiency of Hollywood storytelling.  Hence the guiding principle: condensation of time producing one salient piece of information.  Have a lengthy or large-scale process you want to depict without boring your audience senseless?  The Montage Sequence is your friend.

In classical Hollywood,  most of the studios had Montage Units, whose sole purpose was to provide sequences for movies as required (with a complete lack of directorial input, as was so often the case in the Hollywood Studio System).  It was here that the convention of the Montage Sequence took hold, usually consisting of stock footage depicting the passage of time – turning calendars, newspaper presses, racing trains – plus some elements relevant to the story being told, set to music, with with little or no dialogue.  And it does need to be said that the Montage Sequence can sometimes be a symptom of narrative laziness on the filmmakers’ part.

While the ubiquity of such sequences in Classic Hollywood helped establish the convention, many were fairly rote and unoriginal, with notable exceptions, including Mr. Smith Goes To Washington, which Matthew Turner looks at below.  From the 1960s onwards, the Montage Sequence was ripe not only for development, but also for satire, as Mr. Moth discusses tomorrow.  Of the sequences chosen by our writers, most are from the mid-1980s, though to be fair that probably says more about us than about them.  Of course cliché is not always avoided, but sometimes that’s partly the point.

Done well, the Montage Sequence is an incredibly useful tool.  It can not only propel the narrative forward, but also tell us things that go far beyond mere compression-of-time-plus-one-overriding-outcome.  So which Montage Sequences can we not help but love?  Here, over two days, are some of our favourites.

When prompted to come up with a great montage sequence for this piece, I naturally thought of the stunning sequence that occurs towards the end of Frank Capra’s Mr. Smith Goes To Washington (1939). The victim of a smear campaign by powerful political boss Jim Taylor (Edward Arnold), Senator Jeff Smith (James Stewart) is facing a vote to expel him from the Senate, but savvy political aide Clarissa Saunders (Jean Arthur) persuades him to launch a filibuster to protest his innocence. After several hours of non-stop talking on the Senate floor, Smith’s efforts appear to be in vain, as Taylor has brought his considerable influence to bear on the media, with newspapers and radio stations refusing to report what he’s saying and running negative stories instead. However, Saunders has a plan: Smith became Senator partly as a result of his work with the Boy Rangers organisation (Capra wasn’t allowed to use the name Scouts), so she mobilises the boys into forming a print and distribution network.

The montage kicks in as Clarissa dictates her message (“Jeff Tells Truth!”) to Smith’s mother and the gathered rangers, contrasted with Taylor dictating his own headlines to the Washington press. The boys then spring into action, working through the night on their own hand-operated printing press, contrasted with shots of Taylor’s papers being spat out of a factory line machine press (“Smith Lies, Says Senate”), then a cut back to a hoarse and exhausted Smith, who’s now been filibustering for nearly 24 hours. As dawn breaks, the boys at the presses begin to fall asleep, but now the distribution network takes over (although Saunders’ “billion copies” seems unlikely), with gangs of boys racing all over town and spreading the word with copies of their paper (there’s a great shot of dozens of boys raising dust clouds as they tear off on bikes or on foot, dragging trolleys). So far, so joyous, but then the scene takes a dark turn – Taylor gets wind of what the boys are up to and orders his goons to smash up the boys’ operation. In a series of short shots, we see pro-Smith movements springing up, only to get beaten down by the system – the police even take a fire-hose to a peaceful pro-Smith demonstration. Then Capra brings the sequence to a close with a shot that’s still shocking to this day, as a lorry driven by Taylor’s goons deliberately smashes into a car full of rallying children, their piercing screams echoing as Capra cuts back to Mrs Smith phoning Clarissa and telling her that children have been hurt all over the city and Jeff needs to stop. Capra’s switch from punch-the-air joy to sheer terror is strikingly dark and extremely impactful – the close-up of the boy’s terrified faces as the truck crashes into them will stay with you a long time and it’s hard to think of a comparable contemporary image. But it gets the job done – the press are now independently reporting Smith’s stand and the happy ending is only minutes away.

THE BREAKFAST CLUB (1985)
by Helen Archer

“…And these children/ that you spit on/ as they try to change their worlds/ are immune to your consultations./ They’re quite aware/ of what they’re going through…” David Bowie, Changes 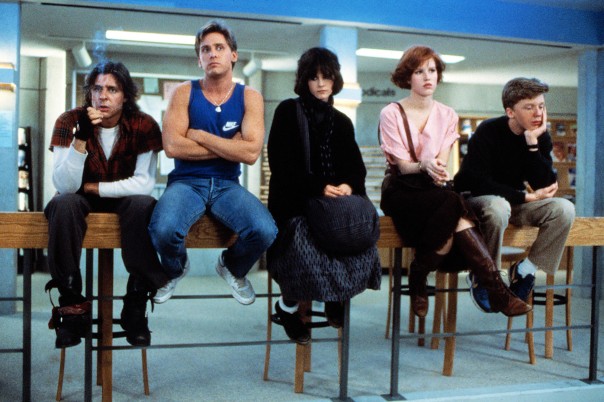 OK, so the dance montage in the middle of The Breakfast Club isn’t ever going to win an award for the best montage in film history. It’s not particularly artistic. It doesn’t contain a whole load of shots. There are no actual epiphanies, no access to our characters’ innermost thoughts, no massive jumps in the passage of time. What it does do, though, is perfectly encapsulate in under one and a half minutes the turning point of the film, the point at which this group of kids “locked in a vacancy” start uniting through their similarities while questioning their differences in Shermer High School, Shermer, Illinois, on Saturday, March 24 1984. Also, it allows me a Bowie standfirst.

The socially segregated schoolyard is John Hughes’ battleground, a place where teenage rebellion serves as a perfect canvas for depictions of class conflict. The Breakfast Club gathers its group of disparate teenagers – “in the simplest terms, in the most convenient definitions: a brain, an athlete, a basket case, a princess, and a criminal” – sticks them in all-day detention, and lets nature take its course.

So, as the first half of the film examines their antipathy towards each other, the montage shows them bonding in the way teenagers the world over have bonded since time immemorial: by smoking weed and dancing to dodgy songs.

The backing track, ‘We are Not Alone’ by Karla DeVito, with its repeated insistence that “We are not alone /‘Cause when you cut down to the bone / We’re really not so different after all”, underlines the fact that our characters will, at least for the rest of the day, refuse to self-segregate, disregard their absent cliques and inherent biases and see each other as equals, individuals who have more in common than they thought simply by dint of being the same age, stuck in the same high school on the same Saturday, with the same brownie hound of a chaperone.

Within the montage, the negotiation of social class is done with economy, grace, and the straddling of a decoy bear in the middle of the school library. It is democratisation by way of soft rock, and, though it has grown old, its heart will never die. 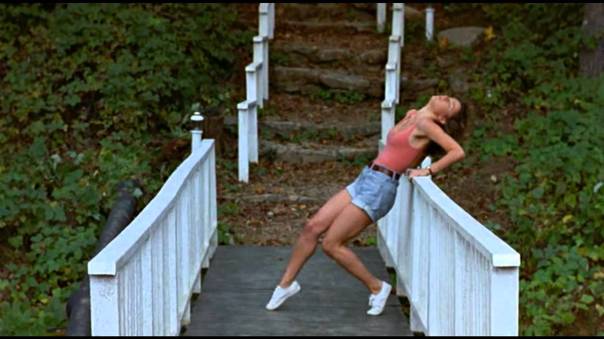 “This is my dance space, this is your dance space.” “Don’t put your heel down!” “Feel the music, like a heartbeat.” If ever a movie was made for montages, it was Dirty Dancing. A story of change and transformation scored to some of the best of ’60s girl-group pop and some of the worst of ’80s power ballads – nice tidy lengths for montages. Baby Houseman has just three days to go from klutzy earnest student to Mambo queen. We see her watching and learning and trying and failing and trying again until finally the glorious success. Maybe we love montages because of the instant gratification they provide, like the before and after pictures of adverts, like reading a diet book and imagining yourself two stone lighter. There’s no work to be done. There she is in holiday shorts and pumps (I love her pumps) messing up her footwork and stamping her little feet. Four bars later, and by George, I think she’s got it. 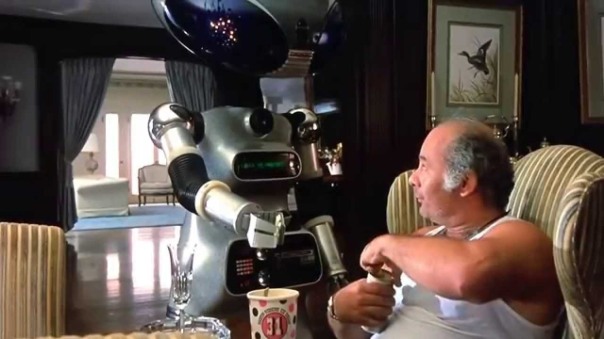 I love Rocky IV, but let’s get one thing clear from the outset: it’s the product of sloppy film-making. It opens with a flashback montage from Rocky III. There are montages scattered throughout; the middle act right up to the climactic fight is made up almost entirely of montages, even the middle rounds of that fight are montage.

So which one to choose for this piece? The drive where Rocky mourns his recently departed former-adversary-turned-best friend Apollo Creed, which conveniently doubles as a recap for the previous three films? This could be described as a meta-montage as it contains clips from montages from those earlier films, including the famous run up the steps from Rocky and the playful beach-run and man-hug with Creed from Rocky III.

No. We need a sports training montage (STM). It seems fitting that in a film composed approximately one third of montages (no exaggeration), Rocky IV has two STMs.

STM #1: we are eased gently into this one, an instrumental soundtrack with some electric guitar and then keyboard. We see Rocky head off for a jog in the snow in his sheepskin-lined leather jacket (the fashion on display throughout deserves a blog of its own). Cut to Ivan Drago in his high-tech facility, all sensors and flashing lights, cut back to Rocky, then back to Drago, contrasting the preparation methods of the two boxers.

STM #2: now we can get serious! The intensity of the training ramps up considerably. This would seem to be an appropriate place for a thumping Survivor tune like ‘Burning Heart‘ to drive the action and sum up the plot, but we blew that on the welcome to Russia scene. So we get, um, ‘Hearts on Fire’. More running. More skipping. More lifting: logs, rocks,  horse-carts. Someveryimpressivesit-ups (Dragon Flags). More contrasts with Drago’s preparation, using the classic montage split-screen technique. Science and steroids versus honest hard work. Now we are ready for the fight!

Every Rocky film lives or dies on its montages. Even Rocky had a montage? Every Rocky has a montage! Creed didn’t do it for me because its montages were average and unmemorable. The original didn’t invent the STM, but it took it to a new level and set the template for martial arts movies for the next decade. Rocky IV has its flaws, but it’s still very enjoyable, and it’s arguably the definitive montage movie. David Hasselhoff may have taken down the Berlin Wall, but Rocky IV paved the way by taking down the Soviet Union.

Enjoying it?  We hope so.  Tune in again soon for some more of our favourite Movie Montage Sequences.

2 thoughts on “Montages for a Monday Morning”