I first saw Gone With The Wind when I was young and impressionable and I’ve loved it ever since: the spectacle, the melodrama and, yes, the frocks. Watch a movie as often as I’ve watched the Wind and you start to notice things, little patterns and parallels. I’m no fashion historian, but it seems to me that Gone With The Wind tells its story as much through costume as through action and dialogue.

Scarlett O’Hara’s story is one of riches to rags to riches again, and of course what she wears throughout the film reflects this. Clothing is a signifier of social status and wealth in any film  but in Gone With The Wind this fact has particular resonance. The wealth of the South came from cotton.  Strict dress codes apply, particularly for women. At key points in the story, items of clothing are given as gifts or rewards or tokens of affection. They are the means through which a woman can recreate herself, the key to a better future, badges of success, markers of disgrace. They can oppress or liberate.

With all this is mind, I thought it would be fun to take a closer look at some of Walter Plunkett’s stunning costumes for the film, chiefly those worn by Vivien Leigh as Scarlett, what they say about the character at different points in the story, how they link her to or set her apart from other characters.

This is a story about growing up and getting on, so of course we begin with a white dress. Virginal, bridal, a blank page. This is 16-year-old Scarlett before anything happens to her. Tomorrow the civil war will begin and, for the first time, she’ll find out she can’t always have what she wants. This is a deliberately childish outfit: the puffed sleeves, the frilled skirt, the high neck, the little ribbons in her hair all scream Shirley Temple, the epitome of 1930s girlhood. Scarlett is supposed to be the oldest of the O’Hara girls, but in the scene of the family praying look how much her dress makes her look like the youngest.

It’s significant that the accent colour here is red: one of Scarlett’s two signature colours. Red reflects not just her name, but the red earth of the family’s Georgia plantation. ‘The red earth of Tara’ is a refrain repeated throughout the film.

Scarlett’s second signature colour is green. It’s the colour of probably the two most celebrated costumes of the film. Here’s the first: the green-sprigged muslin she wears to the Twelve Oaks barbecue. The colour of Irish nationalism, green links Scarlett to her Irish heritage. In the novel, Margaret Mitchell makes it clear that the rebellious side of her heroine’s nature comes straight from her Irish father. For Scarlett, green is the colour of rebellion and self-assertion.

This dress was quite a deliberate choice. We already know, thanks to Mammy, that the cut of this dress is inappropriately risqué for the occasion: a lady should not show her bosom before the afternoon according to convention. Indeed, all the other ladies in this scene are wearing long-sleeved, high-necked, mono-coloured dresses, small bonnets and hairnets. These contrast unfavourably with Scarlett’s off-the-shoulder floral and wide-brimmed straw hat. Apart from her younger sister Suellen, she’s the only woman there wearing her hair down.

She’s being deliberately transgressive, not just in what she’s wearing but in what she’s planning to do. Scarlett carries out her plot to tell Ashley Wilkes that she loves him, persuade him to break his engagement to Melanie and elope with her: behaviour that goes against the strict codes of her society.

A quick word on Melanie’s outfit in the first picture. The soft (Confederate) grey is typical Melanie, and a colour we never see Scarlett (the rebel, not the loyalist) wear. Melanie’s bonnet, shawl and mittens in the shot above look positively matronly compared to Scarlett’s simple sexiness. Melanie is the first of two women Scarlett will be deliberately contrasted with throughout the film. 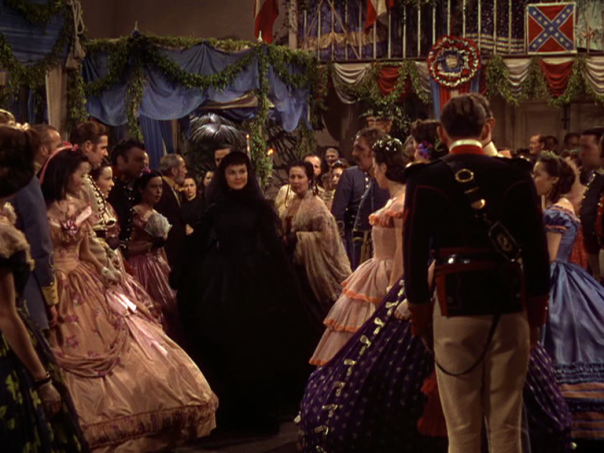 “A widow had to wear hideous black dresses without even a touch of braid to enliven them, no flower or ribbon or lace or even jewellery, except onyx mourning brooches… And the black crepe veil on her bonnet had to reach to her knees and only after three years of widowhood could it be shortened.” Gone With The Wind, chapter 7

Scarlett is widowed twice, so she spends a good deal of time in black and hates every minute of it. In agreeing to dance with Rhett Butler at the Atlanta ball she tramples all over convention again and, in a kind of reverse of the barbecue scene, it’s the plainness of her clothes that sets her apart from the other women. Note that the bonnet Rhett brings Scarlett from Paris is green, Scarlett’s colour of transgression. Although she tells Rhett that she daren’t wear it, she does so later on to greet Ashley arriving home for his Christmas leave, the first time we see her out of mourning.

We’ve gone through the virgin, flirt and widow phases and this scene marks a kind of a return to the beginning. Scarlett is no longer in formal mourning and has settled into life with Melanie in Atlanta. Both women have enjoyed a Christmas visit from a subdued Ashley who knows the tide of the war is about to turn against the South. The red and white dress recalls not just the festive season, but that dress Scarlett wears in the first scene, albeit with significantly more red and rather more grown-up detailing. The frills have gone, but the puffed sleeves and red hair ribbons explicitly recall that first outfit and perhaps it’s significant that this is a scene in which, again, a lovestruck Scarlett is fixated on Ashley. It’s the first time since his marriage that he has given her some indication he is still attracted to her and they indulge in an illicit clinch. She’s giving him a golden sash she has made, a precious gift as the blockades are making fine cloth increasingly scarce. Scarlett is wearing a similar fringed sash on her own dress and the gift ties the two of them together. 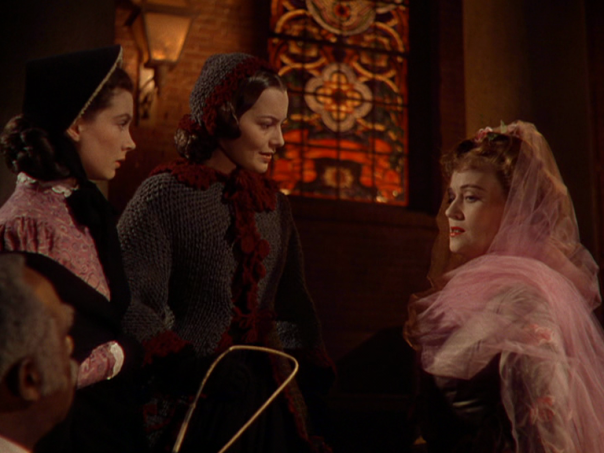 Returning from a tiring nursing shift, Melanie and Scarlett encounter the Atlanta prostitute Belle Watling. A protégé and mistress of Rhett Butler, she brings a touch of scandal to the town. She’s the second woman Scarlett will be compared to and contrasted with. This brief scene brings Scarlett together with both of them: her Madonna-whore touchstones.

Melanie is in grey, again – the colour of the Confederate army. Look at the obvious homemade, hand-knitted quality of her coat and hat. The Yankee blockade is really beginning to bite now. The South can neither export its raw cotton nor import the goods it needs and is having to become increasing self-sufficient.

The pink chiffon veil is typical of the showy clothes Belle wears: she’s always swathed in luxurious fabrics and bold colours: pinks, purples, golds and reds. We can assume that many of these are provided by the blockade-running Rhett Butler. The money she hands over for the hospital is wrapped in one of his fine handkerchiefs.

This is the drabbest outfit we’ve seen Scarlett in so far – even her mourning clothes were classier and more expensive-looking than this printed cotton frock – but the pink connects her to Belle rather than to Melanie.

The drabness continues. Here Scarlett has abandoned her nursing shift at the hospital to discover Atlanta in chaos, fortifying itself against the coming Yankee attack. It’s a working outfit, indicated by her apron and the buff and brown, the first time we’ve seen her in anything like these colours and the first time we’ve seen her do anything like hard or difficult work. These colours also, significantly, link her to the slave characters, often dressed in russets and oranges and browns: Scarlett’s status is rapidly declining, or to put it another way, we’re seeing an equalisation in the status of black and white characters. In the shot above, Scarlett’s outfit, with its combination of swinging, patterned crinoline and dirty apron, pitches her exactly between the social extremes exemplified by her spoilt Aunt Pitty and the maid Prissy. 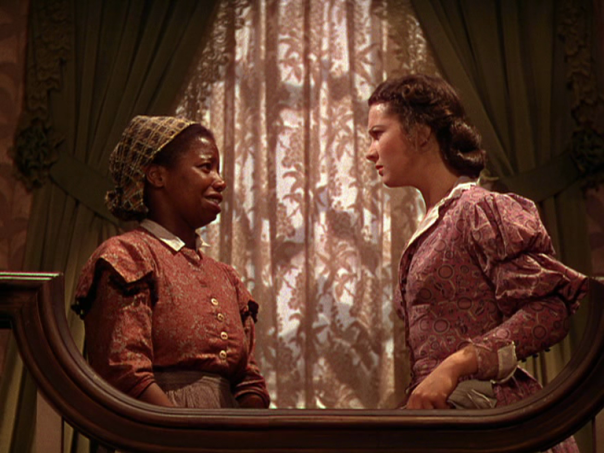 The Yankees are comin’! And Scarlett is about to endure the worst day of her life. I can’t be sure whether the pink dress here is the same one she wears in the earlier scene with Melanie and Belle, but get used to it as we’ll see an awful lot of it from now on. It’s notable that the hooped underskirt has gone altogether and for the first time we have crinoline-less Scarlett, war-time privations not stretching to the quantities of fabric needed. It’s also striking just how closely her dress resembles Prissy’s. But for Prissy’s apron and headscarf, and Scarlett’s more revealing neckline, the two are dressed virtually identically. The straw hat she wears in the still above recalls, with its green velvet ribbons, the one Scarlett wears at the Twelve Oaks barbecue: a visible reminder of a vanished world amidst the horror of defeat.

And that takes us to the mid-point of the film. As God is my witness, I’ll be back next week with Part 2.