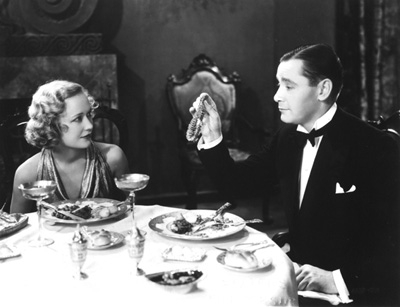 Some years ago, the National Film Theatre (as it was then) asked members to nominate a little-seen film for a Christmas-showing. The winner was Ernst Lubitsch’s 1932 romantic comedy, Trouble in Paradise. Co-written with Lubitsch’s regular collaborator, Samson ‘The Jazz Singer’ Raphaelson, Trouble in Paradise takes full advantage of the permissiveness that abounded before the enforcement of censor Will Hays’ Motion Picture Production Code in 1934. The script, which is heavy with sexual innuendo and irony, was considered too racy during the code era and re-issues were refused. The film wasn’t discovered again until the late 1960s.

Like a lot of early Hollywood comedies, the setting is old Europe: chic, cultured, decadent, gloriously wealthy. But Lubitsch doesn’t waste any time in making a central point (and a good visual gag). The garbageman we see in the very first shot is also an aria-singing gondolier, punting a heap of festering rubbish down the Grand Canal. Glamour, romance and escapism goes hand-in-hand with rottenness and filth.

Lubitsch loves these ironic juxtapositions and gets stuck straight in. Against a starry Venetian night and in a richly furnished hotel suite, a suave baron and a beautiful countess are teetering of the brink of a grande passion. He has planned the perfect seduction over dinner and cocktails, she is fearful of society gossip, there’s a Noël Coward-ish brittleness to their exchanges. We’re in high comedy-of-manners territory. The spell is broken (and what has been a rather stagey expository scene is brought alive) when she takes a phone call from her friend the ‘marquise’. We cut to a dumpy, bedraggled woman rubbing her feet in a squalid room and warning ‘Lily’, in broadest American tones, to come back a different way that night.

The baron and the countess soon reveal themselves, to us and to each other, as Gaston Monescu (Herbert Marshall) and Lily Vautier (Miriam Hopkins), a pair of imposters and professional thieves intent on taking all they can get their light fingers on. Their flirtation plays out as a series of petty thefts – he has her brooch, she has his watch – and they delight in each other’s daring and skill. ‘My little shoplifter, my sweet little pickpocket,’ coos Gaston.

This, though, has only been a prologue to the main action, which shifts to France. Gaston and Lily, now a couple, professionally and personally, target Madame Mariette Colet (Kay Francis), a perfume company heiress and carelessly wealthy young widow. At first, they’re just after the reward money offered for the return of Mme Colet’s ridiculously expensive handbag (which they stole, of course), but Gaston hits on a plan to inveigle his way further into the Colet financial affairs by posing as her secretary. Mme Colet quickly falls for the charming conman, piquing the jealousy of Lily, the resentment of Mme Colet’s two foolish suitors (Edward Everett Horton and Charlie Ruggles) and the suspicions of her business manager (C. Aubrey Smith).

As a pre-code comedy there’s plenty of risqué dialogue and a definite frankness to the subject of sex that one doesn’t see in later films. Gaston leans over a reclining Lily to kiss her; he tells her that Mme Colet’s ‘sex appeal’ is her money (and, we infer, her money is her sex appeal); and there is much business with beds, doorways and closed doors, typical of Lubitsch’s coy visual clues that tell us sex has just or is about to happen. 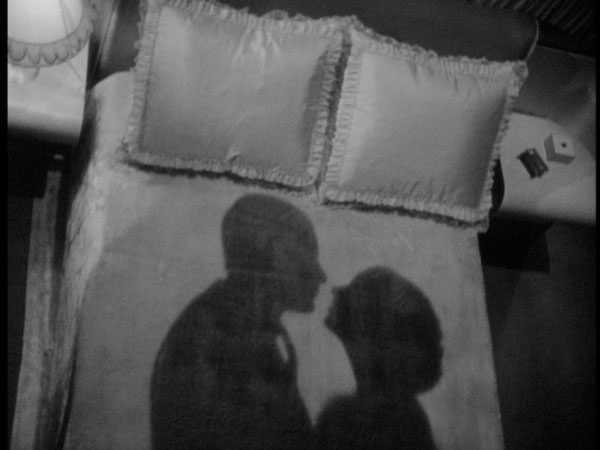 There’s also a gleeful amorality to Trouble in Paradise. The central couple begin the film as thieves and end it as thieves. They don’t learn, they don’t change, they get away with it. And there’s some mild political subversion. Gaston discovers that thievery of a more corporate kind has been going on at Colet & Co. and asks Mariette which is the bigger crime. In an earlier brief and startling scene, a hotheaded young Communist (Leonid Kinsky, Sascha the barman from Casablanca) bursts into Mme Colet’s home to berate her for spending 125,000 francs on a handbag. It’s hard to disagree with him. The Communist also namechecks Trotsky, who was very much alive at the time the film was made. It’s a reminder to the audience (both then and now) of the turbulent politics of the 1930s. However hard they try, Gaston, Lily and Mariette can’t quite shut out the real world.

If there’s a problem with Trouble in Paradise, it’s that the pacing can seem a little off. The film runs for only 80 minutes, yet feels like it drags in places with scenes running on longer than they need to or jokes being overworked. Don’t expect the quickfire crosstalk of later comedies. The dialogue may be witty and droll, but is sometimes ponderously delivered and punctuated with pauses that occasionally verge on the Pinteresque. The performances are sometimes a little too broad, a little too pantomime. Hopkins, in particular, has one or two moments of outrageous mugging, although she also gets the single, best dramatic moment and delivers her killer line brilliantly.

Elsewhere, Lubitsch matches dialogue and sound cues with some dazzling visual economy and inventiveness. The flipping of the conductor’s opera score, overlaid with a soprano screeching ‘I love you!’, then ‘I hate you!’ a few pages later, tells us the opera is nearly over and is a good gag to boot. We see nothing of Gaston and Mariette’s first romantic encounter, and hear only a few brief phrases, but a close-up of a small carriage clock tells us they’ve stayed out all night. As an aside, the film is a real treat for any fans of early 1930s design. Bias-cut dresses, art deco interiors, marcel waves, Modigliani-style paintings, they’re all here.

It’s not hard to see why the NFT members went for Trouble in Paradise. It’s a shimmering bauble of a film: playful, but sophisticated; slight, but shot through black humour and cynicism; a farce, but a farce for grown ups.

Trouble in Paradise is available on DVD from Masters of Cinema