The 66th Cannes Film Festival ended just less than a week ago. In that time, I’ve attempted to clarify my feelings about what I thought, as I left France, was the strongest festival I’ve attended so far. It turns out that I agree with my younger self. This year saw three absolutely exceptional films, as well as a handful of other superb efforts. To clarify, the three best films I saw, The Past, The Great Beauty and Blue is the Warmest Colour elicited the strongest reaction from me since A Separation, which I believe is the best film of the past ten years or so.

I’ll touch on both The Past and The Great Beauty, and a couple of other really impressive titles, but my focus here is on Blue is the Warmest Colour, the film that Jury chair Steven Spielberg and his colleagues, including Ang Lee, Nicole Kidman, Cristian Mungiu, Naomi Kawase, Lynne Ramsay and Christoph Waltz, decided was the best of the festival, awarding the Palme D’Or to the director Abdellatif Kechiche and the two lead actresses Lea Seydoux and Adele Exarchopolous (it’s one of the quirks of Cannes that a film that wins the Palme D’Or isn’t eligible for any other award, so Spielberg took the unprecedented step of giving the Palme to all three of the key talents in the film). 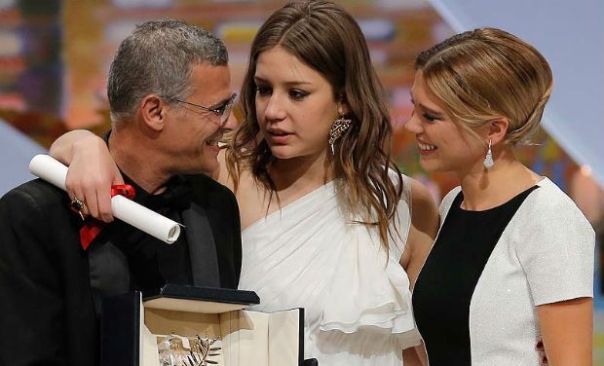 Honestly, I don’t know which of the three films I’ll consider the best of the festival when I come to look back on it later in the year, but I’m absolutely convinced that Blue is the Warmest Colour is the right winner. I’ll touch on the strengths of the other contenders below, but none of them create, so effectively, a portrait of a single person, her hopes, dreams, loves, frustrations, guilt, arousal, losses, grief and maturation. It’s telling that the French title is La Vie D’Adele – chapitre 1 & 2, a much simpler and more accurate name for a film so forensic in its intimacy with its main character.

The film follows Adele (Exarchopolous) on her path from popular schoolgirl to young teacher. We’re with her as she loses her virginity, goofs around with her friends, first lays eyes on, and then falls for, her greatest and first love. We’re with her as she discovers herself through her sexuality. We’re with her as she feels lonely, ostracised, and heartbroken. We share so many of her formative moments that we live them with her; and her pain affected me a great deal.

Much has been made of the fact that this is a ‘lesbian’ drama, but that feels unnecessarily reductive to me. This doesn’t feel like a film about a singular experience, any more than Goodbye First Love, of which this reminded me a good deal, is a film only relevant to people with experiences of straight relationships. The power of Blue is the Warmest Colour is in how much its central relationship, complete with its problems and excitements echoes those in the audience’s pasts, and present.

Indeed, the film races past several (clichéd) landmark stereotypes of the gay experience. We don’t see Adele come out to anyone – this is less important to our understanding of the character, than seeing how she eats, reads, talks about and appreciates art, flirts, fucks, sleeps and fucks up. When people talk about the bravery of the film, they’ll mean the sexually explicit love scenes, the treatment of a same-sex relationship at the centre of a film, but the bravery is in the way that everyone involved commits to a film that so coolly, and completely, dissects a character.

Those sex scenes, that even saw critics from Variety get a little hot under the collar, are as brilliantly realised as the rest of the film. They are incredibly explicit, but not, in the least, exploitative. While many will focus on the act of the ‘real’ sex on camera, what is most astonishing to me is how well it serves the story. Kechiche is asserting that much of the bond between Adele and Emma (Lea Seydoux) comes from how passionately, and physically they love each other. There’s no more exultant, or physical display of that passion than in the seemingly pretty incredible sex they share.

It’s an extraordinary experience. Most cinematic sex adheres to the same set of signifiers to provide a sexual shorthand; a naked shoulder here, a bitten lip there. To see that so resoundingly thrown to one side is going to provoke some interesting reactions. At a festival noted for boos and walk-outs, I should point out that I saw neither at my screening. Of course, much of the audience in Cannes are hoary old pervs, so that might not mean much, but I prefer to think that the audience were so rapt by a groundbreaking, intelligent, awe-inspiring piece of filmmaking so clearly from the heart of all involved that they simply forgot that anything existed outside of the screen for the entire three-hour-plus running time.

In Kechiche’s previous film to get a UK release, Couscous, his canvas was an entire community. I liked the film a great deal, but it would be fair to say that it hasn’t stayed with me particularly. There’s no doubt that Blue is the Warmest Colour has left its mark in indelible ink, in the gorgeous photography, the beautifully stark way that the relationship begins to seem less than perfect, in how sexy the chemistry between Seydoux and Exarchopolous is, and in the power of the performances. Seydoux is terrific, better than I’ve ever seen her, but I’m struggling right now to think of the last time a performer made such a strong first impression on me as Exarchopolous does here. Her performance is scintillating and utterly, utterly complete. It’s the glue that holds the film together, the heart that ties the audience to it and it’s so natural, so primal that it feels completely brand new.

As brilliant as Blue is the Warmest Colour is, Abdellatif Kechiche was not the only filmmaker to build on his reputation at Cannes. JC Chandor’s All is Lost is an absolutely outstanding thriller, both old-fashioned and incredibly powerful with a stellar turn by Robert Redford (yes, really). Alexander Payne is back on top form with Nebraska, his best film since Election. The Coen brothers delivered another mini-masterpiece with Inside Llewyn Davis, which features a star-making performance from Oscar Isaac. Hany Abu-Assad’s Omar is an absolute gem of a thriller set in occupied Palestine, while Waltz With Bashir director Ari Folman delivers something weird and wonderful with his animated head-fuck The Congress. I also loved Kore-eda’s Like Father Like Son, although it’s probably a touch below I Wish, Still Walking and Nobody Knows.

To the other two standouts, though. The Great Beauty is far and away Paolo Sorrentino’s best film – an epic lament to the vacillation of modern Italy, even in those who claim to hold its history of high art dear. He portrays a society drinking, dancing, dieting and fucking itself to death. It’s a powerful, joyful and beautiful film, a film that echoes La Dolce Vita, yet doesn’t suffer unduly in the comparison. It was the film I expected to win the Palme D’Or, as the direction is so ostentatiously brilliant that I felt it had to seduce the filmmakers on the jury.

The Past is Asghar Farhadi’s follow-up to A Separation which, as mentioned above is the best film I’ve seen in years (About Elly released after A Separation was actually made the year before). For the vast majority of its running time I was convinced that Farhadi had improved upon what I considered perfect. It’s a tightly wound family drama, as adroit in handling the numerous relationships between the characters as A Separation was in observing the gulf between a still-loving husband and wife driven apart by their unshakeable belief that they cannot compromise. It features a handful of knockout performances, by Ali Mosaffa, Pauline Burlet and Best Actress winner Berenice Bejo (The Artist). She is absolutely terrific, the heart of the film – unable to turn away from her past, even when it’s all she thinks she wants.

Artificial Eye, or Curzon Film World as they’re also known, will be releasing The Past, The Great Beauty and Blue is the Warmest Colour in the UK. They’re the three best films of this year, or last, by a considerable margin. I hope that audiences in the UK get to see the version of Blue is the Warmest Colour with all of its ambition, character, warmth and emotional tumult present and correct. I’m sure that Artificial Eye will absolutely fight for the film to be seen uncut. I’m not overstating when I say that in a period in which I feared I may be falling out of love with film, a picture so accurate about, and inspiring of, love, has me head over heels once more.

3 thoughts on “Blue is the Warmest Colour”