Philip Concannon reports back from this year’s Cinema Ritrovato festival in Bologna.

No two experiences of Il Cinema Ritrovato will be the same. The festival’s vast and eclectic programme offers so many options for the curious film fan, there’s really no right way to navigate it. Some will choose to revisit old favourites screened from original prints or restored copies, while others will focus on rare titles and unknown quantities. Treats are to be found in every corner of the festival, along with a number of very difficult choices. On a single evening in Bologna, you could see one of the following: D.A. Pennebaker introducing Monterey Pop on Piazza Maggiore’s huge screen; the Austrian silent film Die kleine Veronika presented on a carbon projector; or a new restoration of The Bird with the Crystal Plumage, with Dario Argento himself in attendance. It’s not always easy being a cinephile.

On this particular occasion, I opted for the carbon screening, as seeing this beautiful old machine in action is one of Bologna’s distinct pleasures. Before the main feature we were treated to a series of (surprisingly pornographic) shorts from the first years of the 20th century as well as a long-winded explanation of carbon projection. Still, listening to that (in both English and Italian) wasn’t as rough on the ears as the score that accompanied Robert Land’s film. Florian Kemt used a guitar and various sound effects to create a discordant, screeching racket that constantly felt at odds with the images on screen. Die kleine Veronika is a straightforward and moralistic drama about a young country girl whose innocence is exploited when she visits Vienna, and at times it possesses a Murnau-like visual splendour in its exceptional location work, with these photographic qualities being highlighted by the glow of the projector. I tried hard to focus on these aspects while blocking out the disastrous cacophony emanating from the side of the screen, and just about managed to enjoy the movie in spite of Kemt.

This was a rare misstep, as the quality of musical accompaniment for silent films in Bologna is usually extremely high. I loved The Sprockets’ performance of Maude Nelissen’s score for The Patsy (which almost didn’t happen after a huge storm threatened the outdoor screening) and the emotional power of Frank Borzage’s Secrets was accentuated by Nelissen’s sensitive work on the piano, particularly during the astonishing sequence in which Norma Talmadge cradles her child as a gun battle rages outside. Credit is also due to Gabriel Thibaudeau for his superb work accompanying Caligula. Ugo Falena’s hour-long 1917 depiction of the mad Roman emperor is slight and stagy, but it has a handful of striking scenes, notably the erotic dance that Caligula forces a slave girl to perform for him. As Stacia Napierkowska’s dancing grew more frenetic, Thibaudeau upped the intensity of his playing, and this combination generated an extraordinary moment that entranced the large audience and transcended the rest of the film.

I had to stand throughout Caligula due to the popularity of the screening, but that’s not such a hardship for a film that runs for 65 minutes. I was glad to grab a seat for Casanova, however, as Alexandre Volkoff’s film is 159 minutes long and I was doubled over in laughter for much of it. I had an inkling that I’d enjoy this film from the fireworks-heavy opening credits, and it hit the ground running with a terrific opening set-piece, in which Casanova and two of his many female companions scared off an angry bailiff with a book of witchcraft. The pace rarely flagged thereafter. A loosely connected series of escapades, Casanova follows the incorrigible rogue as he seduces and fights his way from Venice to Russia and back, and Volkoff directs it with grand style. He constantly finds ways to surprise with his dynamic camerawork and witty visual effects, and his use of colour in the final third of the film – during a Venice-set nocturnal carnival – is so beautiful in this new restoration. But the real reason for the film’s success is its star. Ivan Mosjoukine plays Casanova with all of the flair, charisma, knowingness and bravado that the role demands. He can play broad comedy brilliantly but some of the biggest laughs are derived from a sly glance or the flicker of an eyebrow. Mosjoukine reprised this role in René Barberis’ 1934 film, but I can’t imagine it being anywhere near as impressive or entertaining as this. 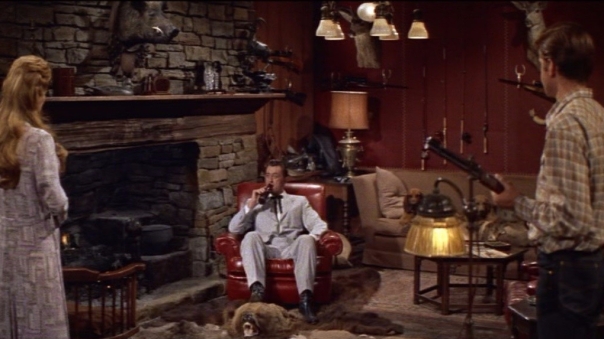 It’s tempting to opt for the shorter titles in Bologna in order to pack more into your day (and to leave plenty of time for pizza and gelato, of course), but Casanova was actually my second hefty film of the day, following Vincente Minnelli’s Home from the Hill. I had approached this one with slightly tempered expectations, having never heard much talk of this 1960 feature, the first Minnelli made after winning an Oscar for Gigi, but it is far from a minor entry in the director’s body of work. An epic family saga unfolding over the course of a year, Home from the Hill stars Robert Mitchum as the powerful Texan landowner Captain Wade Hunnicutt, notorious throughout town for his history of womanising. He has an icy relationship with his wife Hannah (Eleanor Parker) and both have very different views on the best way to raise their teenage son Theron (George Hamilton), but the most fascinating character is his illegitimate son Rafe (George Peppard), who emerges as the film’s real protagonist.

Minnelli takes his time telling this story, with an hour of the film elapsing before the narrative really begins to take shape, meaning we have a strong sense of who these people are and what their relationship is with each other when long-buried secrets are spilled out into the open; the sins of the father being visited upon his son. Home from the Hill is a fascinating film about masculinity and it possesses a raw emotional force that gradually accumulates before exploding in the wrenching final scenes. Minnelli draws vivid, textured turns from each and every one of his actors – with Peppard’s touching performance stealing the movie – and, of course, his use of the CinemaScope frame is never less than magnificent. It’s a masterpiece.

Discovering a great film from one of your favourite directors is one thing, but discovering a previously unknown filmmaker who instantly becomes a favourite is quite another, and I had two such revelations in Bologna. A friend had recommended Helmut Käutner’s Under the Bridges to me, and while I thoroughly enjoyed that comedy about two bargemen who fall for the same woman, I wasn’t adequately prepared for the knockout that was to follow with Portrait of an Unknown Woman. The film begins with a simple but ingenious premise: a painter, bored at the opera, idly sketches the beautiful woman sitting in the box above him, only for her to vanish the next time he raises his eyes from his drawing. Bewitched, he goes home and paints a nude model, adding the mysterious woman’s head to the figure and inadvertently causing a scandal, for she is the wife of a diplomat and his painting risks doing irreparable damage both to her reputation and her husband’s career. 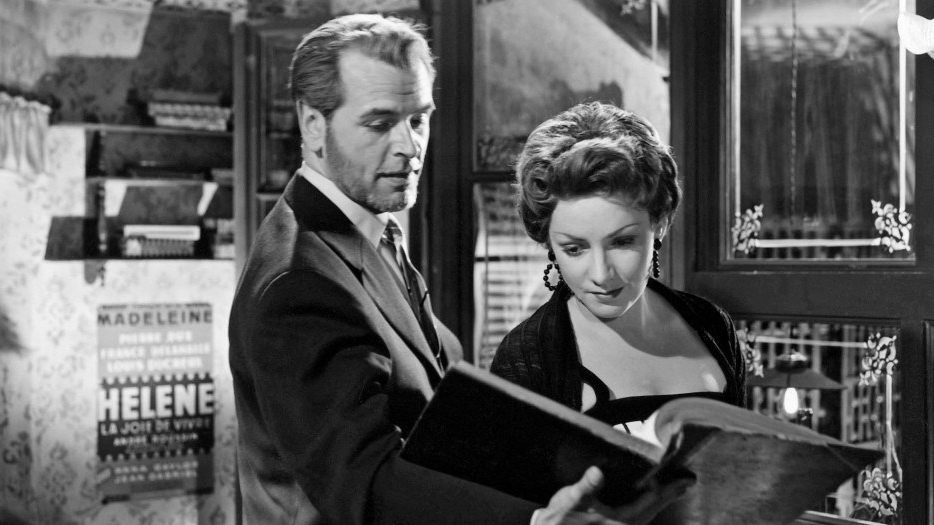 The pleasures of Portrait of an Unknown Woman lie in the way Käutner develops this story and takes it in a variety of unexpected directions, while always keeping it believable and grounded in character. O.W. Fischer and Ruth Leuwerik are both perfect as the arrogant artist and his reluctant muse, and Käutner pays just as much attention to the supporting roles, with each small part being filled by an actor who brings something of value to the film. Everything in Portrait of an Unknown Woman is carried off with such elegance and assurance; Käutner never puts a foot wrong. He was also responsible for one of the most delightful surprises of the festival on my final day, with his 1960 film A Glass of Water. This comic musical about romantic and political entanglements in the court of Queen Anne captivated me with its opening song, and Käutner breezes through the farcical, confusing, frequently hilarious story with admirable ease. At its best, it feels almost like Lubitsch.

A Glass of Water is a musical that takes place entirely with a self-consciously artificial and theatrical environment, which means it shares a number of qualities with perhaps the best film I saw in Bologna, Med Hondo’s West Indies. Set entirely on the deck of a wooden ship that’s housed within a giant warehouse, this audacious film unfolds centuries of slavery and colonialism in a shade over two hours. Hondo can shift fluidly from Caribbean natives being drawn to France by the promise of a better life, only to be forced into servitude, and the white colonists moving in the other direction, all within a single location. West Indies feels both overtly theatrical and exhilaratingly cinematic, with Hondo always using his camera purposefully, combining stunning tableaux with kinetic, passionate scenes of dancing and music. Particularly when seen on a pristine 35mm print, the film is a sensational big screen experience; overwhelming colour, an infectious rhythm, and a wry, angry, perceptive filmmaking sensibility. 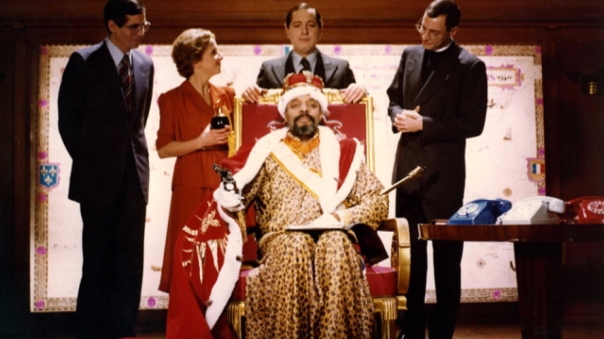 Three of Hondo’s films screened at the festival – including his provocative feature debut Soleil O (1967) and his outstanding Sarraounia (1986) – but the deepest impression was made on me by Hondo himself. He provided long and impassioned introductions for each of his films, and during every introduction he couldn’t hold back the tears, so overcome was he by the simple fact that his long-unseen films were finally being presented to an appreciative audience. In his introduction to West Indies, Hondo reminded us that a film is only alive when it speaks to an audience and that our presence in that room was helping to bring his work back to life. My week in Bologna was full of incredible discoveries, and I left with many memories that I’ll treasure for years, but ultimately I think it’s Med Hondo’s tears that will stay with me most of all as a true representation of the power of cinema, and the unique magic of Il Cinema Ritrovato.