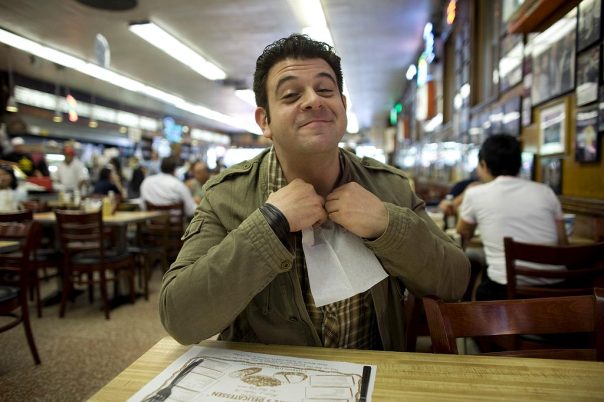 A crowd of hyped-up regulars, bemused tourists, small children (always small children), drunks and staff cheer relentlessly for a man they’ve never met performing a feat they’d never attempt for a prize they would never want. At one point a – probably drunk – young man steps up from the audience and whoops ‘Come on, you can beat this, you’re a MACHINE! WOO!’. If he was in a football stadium he would have his shirt off, and writing painted across his torso. If he was in a war, he would be charging at the enemy, balls-naked and armed only with a pocket knife. A pretty young woman – let’s be honest here, also drunk – dashes up to the man at the centre of the attention, kisses him and yells ‘You can do it, I believe in you!!’. The man at the table looks up, briefly, from his task, smiles like a man facing a firing squad and dives back in. Seconds tick by, minutes pile up, discarded husks of the man’s enemy pile up too. Something momentous is going to happen.

He’s going to win. The crowd’s belief, their simple willingness to cheer him on, has been rewarded. He stands on a chair to take in the final moment. His face a burning, greasy, sweating mask of triumph, he bites down on the last chicken wing and looks at the camera. ‘In the eternal battle of Man vs Food,’ he intones, his voice conveying the solemnity of the occasion – he is Adam, the first man, doing battle with Man’s oldest friend and most ancient enemy, Food – ‘this round GOES TO MAN!’

Then he is given a T-shirt.

“Man v Food” is a show watched by few people in Britain because few people understand its joy,  and because of a basic misunderstanding of one of the central food concepts it celebrates – excess.

I’ll start with excess. The very first episode of “Man v. Food” which I encountered, in its moveable slot on the Good Food channel, featured a cinnamon bun. Not just a regular cinnamon bun, one bigger than your head. ‘Oh my god,’ I thought. ‘That’s repulsive, no human being should order that, how do you eat that, it’ll make you sick!’. Well, I got my answer – you eat it in slices, like a cake, and you eat it with friends. Click. Suddenly the gargantuan American Portion made sense. It’s not one person overindulging, it’s a group having a perfectly sensible sized meal to share. It’s a family of ten ordering a pizza as big as the table, then taking the remains home in a doggy bag (oh, but honestly, doggy bags. It just seems rude not to finish your meal… and then to say you’ll take it home and heat it up like common leftovers, well! What are we, French?). It’s a group of students sharing a foot-high stack of meat after a night out. No-one orders the whole thing for themselves. Only a maniac would do that.

Enter Adam Richman. “Man v. Food”’s charismatic and fearless host, Richman has come a long way, from a milquetoast who couldn’t even handle one spicy chicken wing to a hardened battle-eater* who can down a pint of habanero extract and still have room for a nine-pound steak. Adam is the heart and soul of the show; without him, it would just be “Diners, Drive-Ins and Dives”, Food Network’s similarly-themed but palpably inferior show. It covers a lot of the same ground as “Man vs Food”, but Guy Fieri is no Adam Richman. He’s barely Sophie Dahl.

The structure of each episode is basically the same. In the first half, Adam turns up in a town and has a nose around the local… let’s call them “eateries”, because someone has to. He goofs around with the patrons, he swaps banter with the chefs. Cooks. They’re cooks. They cook. They grill, they broil, they melt, they assemble. They don’t fuck about cheffing. He compliments the food, in such a way as to make the viewer think, hey, perhaps he means it. His comments seem accurate, fitted to the food, true responses. His enthusiasm is unforced. This man wants to eat this food, and isn’t concerned in the slightest with gastronomic elitism.

Man v Food confirms every sordid nightmare, every shameful dream you’ve ever had about American food. Every pudding is a mound of soft ice cream, topped with cream, sauce, sprinkles, waffles, fruit, chocolate shavings, more ice cream, and a drawer full of spoons.  Piles of thick-cut  beef and turkey totter perilously on the chewiest looking bagels in every Jewish deli. Hubcaps of meat lurk squashily inside giant buns, cheese oozing out to coat the hungry diner in grease. Char-edged, succulent, pulled pork masses in heaps by
smoke-clouded flame pits. Meat abounds, meat and cheese, this isn’t a show for vegetarians. A salad would be fine, I suppose, as long as it was smothered – as everything is smothered in “Man vs. Food” – in meaty, bean-filled chilli sauce.

Adam loves it, he loves it all. His response to a gravy-soaked beef sandwich (honest to god) is misty-eyed joy. The sight of a pancake made with bacon in the batter brings him close to a kind of religious ecstasy, though who can blame him for that? Watch him when a cook pops a little cloche over a burger to melt the cheese – he is waiting for the reveal like a child watching a magic show. Food is pleasure, more food a delight. And the most food imaginable? Well, that’s a challenge, and that’s what awaits in the second half of the episode.

From the outside, restaurant eating challenges are  the apex of American gluttony, an easy shorthand for exactly why those colonial types are all such fatties. It’s all them 50 oz steaks they eat, innit? To the owners of the restaurants, they’re a piece of personal history. Some restaurants have only just been founded and they already have a Wall of Fame to commemorate any winners (and, usually, a much larger Wall of Shame to record the rest), one eye on posterity. Some have been setting the same challenge for decades; The Big Texan Steak Ranch’s challenge has been running for around 50 years and they list almost 9,000 winners (and circa 40,000 losers). This is as much about identity as gluttony. Each challenge is a specialité de la maison.

Which isn’t to say they are always worth taking on. There are some basic rules about setting good challenges, which exist only in my household, but I think work well.

• No cash prizes, or prizes of any worth. A photo or name on the Wall of Fame. A T-Shirt. Pride. These are good prizes. $100. A brand new guitar. “Not paying the bill”. These are not good prizes.

• No cheating with chilli extract. This is basically concentrated heat; a tiny bottle of chemical ooze applied with a pipette and has little to nothing to do with actual cooking. It’s the spice equivalent of putting ice-cream van red sauce in a recipe calling for fresh strawberries. Cook up some peppers, you lazy bastards!

A bad challenge, according to Moth’s rules of MvF:

• Don’t pile on a ton of the same thing and call it a challenge. Magnify, play with normal food,  – burgers the size of your face! Pizzas that cover a tabletop! An ice cream sundae in a replica sink! – or assemble a varied meal that looks like the entire menu  on one plate. There is no sinking feeling worse than hearing a restaurant owner announce that the challenge is to eat, like, five sandwiches, or sixteen burgers. Excess, not overload.

A good challenge, also according to Moth’s rules of MvF:

• The worst crime, the one seen most often, is the overly-restrictive time limit. I understand that the owners of a restaurant don’t want someone sitting down and taking a whole table for a whole day just to eat a stack of pancakes the height of a three-year-old, but some limits are taking the piss, and seem designed specifically to avoid ever having a winner.

• PRO TIP: If you’ve never had anyone beat your challenge, you’re doing it wrong. It should be achievable, and it should feel achievable to the audience.

If a challenge is well-judged, if it seems worth it, the experience can be as euphoric as set out at the start of this post. A lot of meat is consumed, a lot of cheering is done and, win or lose, Adam always lives in the moment of consumption, and the crowd always cheers like they’re bawling for their home team. If the show is nothing else, it’s a heartening example of how society will pull together to help just one member of it achieve a goal as noble as scoffing a whole pig.

If it goes badly, well, that’s just uncomfortable. When Adam struggles, it comes across in no uncertain terms. Man v Food’s “naked lunch” moments are extreme. This is now just a man pouring with meat-sweat attempting to stuff an obscene amount of food into his mouth, egged on by a crowd of indifferent onlookers, to gain a prize of no worth, for the benefit of a sedentary, sofa-bound audience. Happily, this feeling doesn’t last long. Blink and it’s gone.

The mock press-conference at the tail of the show brings you back into Adam’s charming orbit, sending you out into the EPG with a self-deprecating smile. Pick another show now, your half-hour of excess is over and you don’t even have indigestion.

*But not, as his opening spiel insists, a competitive eater. This was shown quite graphically when Joey “Jaws” Chestnut, a competitive eater, joined him in a restaurant and put away a 5-pound burrito in just over three minutes. It was like watching a snake eating a wombat.