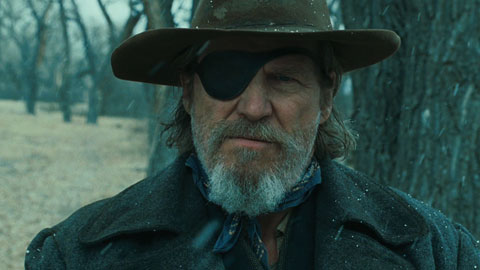 My favourite film of 2011, hands down, is True Grit, the Coen Brothers’ Oscar nominated adaptation of the novel by Charles Portis. I’m a huge Coen Brothers fan (they’re my favourite current directors and only Michel “The Artist” Hazanavicius is their equal when it comes to pastiche) but when I heard that they were doing True Grit, I initially wondered why they’d want to do that rather than come up with an original western of their own. My doubts were quickly quashed as soon as the official trailer was released. I haven’t read the source novel, but by extrapolating from the overlap between the 1969 film (directed by Henry Hathaway and starring John Wayne as Cogburn) and the Coens’ version, it’s easy to see what attracted them to Portis’ novel in the first place, not least because it combines the two elements the Coen Brothers are most known for: jet black humour and moments of shocking violence.

The film stars newcomer Hailee Steinfeld (who was robbed by the Oscars because they nominated her for Best Supporting Actress rather than Best Actress, but that’s another blog post) as feisty 14 year-old Mattie Ross, who recruits boozy, one-eyed US Marshal Rooster Cogburn (Jeff Bridges, also Oscar nominated) to help track down her father’s killer, outlaw Tom Chaney (Josh Brolin). Despite Mattie’s objections, Cogburn is joined by preening Texas Ranger LaBoeuf (Matt Damon), who’s pursuing Chaney for a different crime and the three set off together after Mattie proves her own true grit by riding through a river to join them when they try and leave without her.

The Coen Brothers’ films are renowned for their fabulous dialogue and True Grit is no exception – “I admire your sand” (from Mattie’s negotiation with a horse trader) is probably my favourite line in any film this year. However, what’s surprising is that so many of the wonderful lines and quirky off-the-wall moments were also  in the Hathaway film  and so must have been lifted directly from Portis’s 1968 novel. I’m thinking in particular of the undertaker who repeats the line “If you would like to kiss him, it would be alright” to Mattie as she’s negotiating over what to do with her father’s body. (Later, the line is reprised as “If you would like to sleep in the coffin, it would be alright…”, which is just as weird, if not weirder.)

True Grit contains three of my favourite film performances of the year. Steinfeld anchors the film with an assured turn that’s full of surprises and great moments, such as the above-mentioned horse-trading scene and her first encounter with LaBoeuf. In her own way, Steinfeld is channelling John Wayne just as much as Bridges, since her revenge-obsessed character (“I would not rest easy until that… cur was roasting and screaming in hell!”) recalls Ethan Edwards in The Searchers, both in her righteous fury and in the fact that her desire for revenge blinds her to the truth where Chaney is concerned. Basically, she’s Ethan Edwards with braids. I also love her bold, clear voice, in stark contrast to Rooster’s mumblings.

As for Bridges, he’s such a perfect match for the Coens that at least part of me wishes they’d cast him in everything they make from now on. His performance here  is utterly wonderful. He deliberately mumbles his lines incomprehensibly (it’s a bold decision and it sounds infuriating, but it works) and gleefully plays up Cogburn’s reputation as “the meanest” of the available marshals by randomly kicking a child just for the hell of it or enjoying tormenting a wounded opponent. It’s an entirely vanity-free performance (he’s first heard on the toilet in an outhouse – you can’t imagine John Wayne agreeing to that) and it works brilliantly, with Bridges somehow managing to work in a little of The Big Lebowski‘s The Dude  as well as channelling a little of Wayne’s Oscar-winning performance. Speaking of which, the Coens’ version reinstates a scene from Portis’s novel that didn’t make it into the 1969 version but was later used in 1975’s sequel Rooster Cogburn – the scene where Rooster drunkenly uses the party’s food (corn-dodgers) for target practice by flinging them into the air and shooting them. (This scene, delightfully, gives us the other much-quoted line from the film, when LaBoeuf says, “I thought you were going to say the sun was in your eyes…that is to say…your EYE…”). Damon’s wit and likeability are crucial to his portrayal of LaBoeuf, who isn’t necessarily the kind of character audiences root for – his first appearance, let’s not forget, is unannounced in a sleeping 14 year-old girl’s bedroom

Is there a better cinematographer working in cinema today than Roger Deakins? Not for my money – that shot of the train coming out of the dark in The Assassination of Jesse James By The Coward Robert Ford (officially my favourite film of the 00s) is the single most beautiful image I have seen on screen in the last five years –  and I’ve seen about 2,500 films in that time. Needless to say, Deakins is on typically peerless form in True Grit, as is the Coens’ other regular collaborator, Carter Burwell, whose gorgeous score subtly incorporates the hymn (“Leaning on the Everlasting Arms”) from The Night of the Hunter.

My last five best films of the year were Winter’s Bone (2010), Sugar (2009), There Will Be Blood (2008), The Assassination of Jesse James By The Coward Robert Ford (2007) and Brokeback Mountain (2006) : what those films have in common with True Grit, for me, is the perfect combination of a great story, superb dialogue, a terrific score, gorgeous cinematography and stand-out performances. Also, it turns out I really, really like Westerns. Make more Westerns, please, the Coen Brothers.

Final aside: there’s an excellent comic that was produced to accompany Rooster’s courtroom story here..

2. The Extraordinary Adventures of Adele Blanc-Sec

Matthew Turner  is the film reviewer for ViewLondon At the time of writing, he has seen 482 films so far this year.