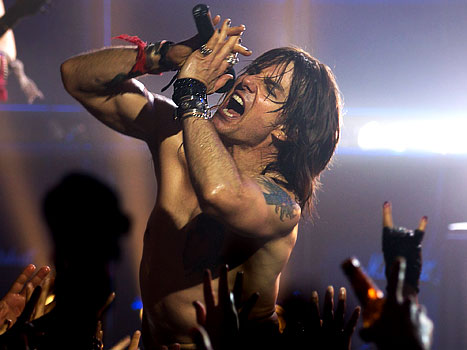 Maybe it would have been different if the band hadn’t been called Arsenal. It’s so jarring to British ears to hear things like, ‘Hey man, I saw Arsenal play in 79.’ Thoughts immediately jump to Alan Smith rather than Aerosmith, to van Persie rather than Van Halen.

Arsenal, in case it’s not clear, is the fictional band in Rock of Ages, the jukebox musical that has made the lightning leap from the LA fringe, to off-Broadway, to on-Broadway, to the West End, to the big screen.

Not having seen the stage show, I went into Rock of Ages absolutely cold. Somewhere on the fringes of my consciousness, maybe from a half-remembered episode of Elaine Paige on Sunday, was the impression that the show is actually pretty good. Certainly better than it had any right to be.

I was hoping for the same from the film. Even though I’m no great fan of either jukebox musicals or the big-haired 80s rock being celebrated here, it is possible to squint a bit and expect at least passable things from the movie.

It’s directed by Adam “Glee” Shankman, who did a perfectly serviceable job with Hairspray, Justin Theroux helps out with the screenplay and there’s the central casting coup of Tom Cruise as Stacee Jaxx (works in ci-vil ser-vice), Arsenal’s dissolute, sexually charismatic frontman. Throw into the mix Alec Baldwin, Paul Giamatti, Catherine Zeta-Jones, Bryan Cranston, even Russell Brand – whose foppish-rockish persona seems perfect for such material –  and surely an evening of silly, high-camp fun awaits. Sadly, it’s a tedious and airbrushed affair, profoundly lacking in humour, heart or even basic plot logic. It will no doubt be a massive summer hit.

As with all jukebox musicals, the plot is nothing more than the flimsiest of frameworks to hang the songs on, but even by the standards of the genre this one is particularly half-arsed. The year is 1987. Sherrie and Drew (Julianne Hough and Diego Boneta) are two wide-eyed ingenues enjoying a fledgling relationship and nursing ambitions to make it big in rock and roll. They get by doing bar work at the Bourbon Room, the hottest, rockiest venue on Sunset Strip, owned and managed by Dennis Dupree (Baldwin) and his British sidekick Lonnie (Brand, trying out a not-altogether-successful Black Country accent). Arsenal are booked to play their farewell gig at the Bourbon Room before Jaxx leaves to go solo. Rolling Stone need a crucial interview with the elusive star. Conservative forces, in the person of the ineffectual Mayor Whitmore and his scheming wife Patricia (Cranston and Zeta-Jones), are threatening the venue with closure. A series of predictable crises are sign-posted and played out and all ends well.

Underscoring the action is a grab-bag of rock anthems and power ballads: Paradise City; Wanted: Dead or Alive; I Want To Know What Love Is; Here I Go Again; Every Rose Has Its Thorn; Don’t Stop Believin’ (…again). There is a lot of music here; we get barely two minutes between songs and the film runs for two hours. What you get out of the film will ultimately come down to how much of a kick you get out of watching Oscar-nominated actors – and especially Tom Cruise – indulge in a kind of Stars In Their Eyes glam metal special.

Cruise’s casting is in fact pretty interesting, not least because he spent so much of the actual 80s playing uptight, earnest yuppies (even Maverick wasn’t that maverick), giving uptight, earnest interviews and generally cultivating a public persona about as far removed from Nikki Sixx or Axl Rose as it’s possible to get. Cruise has in recent years forged an enjoyable sideline in sending himself up and playing against type and I expected his turn as Stacee Jaxx to deliver more of the same. A long-haired, tattooed, leather-chaps-wearing Tom Cruise, strung-out on Jack Daniels and (although the film dare not show it) heroin, is itself a joke, right? But Cruise delivers a surprisingly committed performance. Cruise’s Stacee Jaxx takes himself and his cult of personality utterly seriously. I was expecting something big, blowsy, arch and audience-pleasing – Johnny Depp as Jack Sparrow turned up to 11 – but it’s like Cruise saw in a couple of Bon Jovi covers and some weak sex gags the very essence of rock and roll mystique. I can’t believe Shayne Ward at the Shaftesbury Theatre is doing it the same way. Perhaps it takes a genuine superstar to understand what it is to have boundless reserves of self-belief and to play that. I still haven’t made up my mind whether he’s really great or really terrible.

Alec Baldwin, on the other hand, is all gruff, paunchy embarrassment, while Russell Brand is just pleased to have been asked. Catherine Zeta-Jones and Bryan Cranston are fine, but under-used. Wikipedia tells me that the plot has been substantially re-engineered, with the Mayor’s wife, Arsenal’s manager (Giamatti), and Malin Åkerman’s Rolling Stone reporter all new characters.

Most puzzling is R&B star Mary J Blige as Justice, the owner of a strip club where Sherrie finds herself working after the story’s mid-point crisis. Why cast Blige in a rock musical anyway, unless that itself is another joke? It’s a thankless role, reminiscent of Queen Latifah’s in Hairspray – a middle-aged black woman who turns up halfway through to give support to the heroine and sing a song about toughening up and getting through. Blige sings fantastically and acts indifferently. Her main role in the film is to convince Sherrie to become a stripper and start grinding round that pole as it’s the only place men will ever have any respect for her. You read that correctly. That Sherrie turns to stripping is little more than a hook on which to hang a pole-dancing sequence, and to tell us she has hit rock bottom, and I don’t have much of a problem with that. But I do have a problem with the way the message was casually tossed in, never challenged and put in the mouths of the film’s only wise and maternal character. It’s indicative of the way script and character are bent in the service of cheap laughs and titillating setpieces.

Was there anything good? Cruise’s extraordinary performance aside, there’s some quite funny pisstaking of New Kids on the Block, and one or two of the songs have such irresistible riffs that for the briefest moment even I felt like reaching for the stonewashed denim and extra-hold styling mousse. Add in the thrill of live performance and (no doubt) audience participation, and I can see how this could be a fun night out at the theatre.

But I said before that I don’t like jukebox musicals, and I stand by that. They’re easy, they’re lazy, they’re cynical, they’re calculated exercises in nostalgia. Rock of Ages is all of these things. Go and see it if you must, but don’t say I didn’t warn you.

3 thoughts on “Rock of Ages”