Part of an occasional series in which Spank The Monkey travels to foreign countries, watches films in unfamiliar languages, and then complains about not understanding them. This episode: Norway, November 2013. 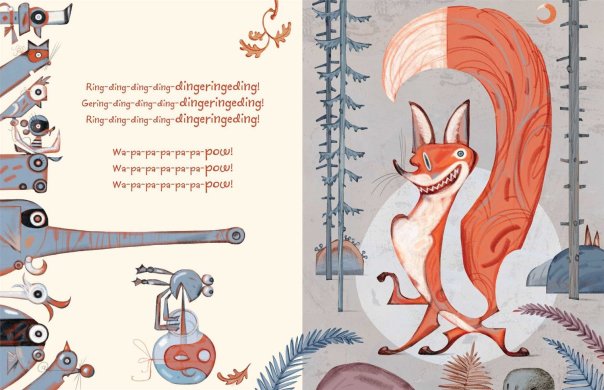 If we’re going to be honest about Norway’s contribution to global popular culture, then we have to admit that they’ve been coasting on Take On Me for some considerable time now. At least, that was the case until September, when suddenly the word on everyone’s lips was “ring-ding-ding-ding-dingeringeding”. Or “joff-tchoff-tchoff-tchoffo-tchoffo-tchoff”. Or maybe just “Ylvis”. Because no matter what the Chinese might tell you, 2013 was the year of The Fox.

When I visited Norway two months after the brothers Vegard and Bård Ylvisåker put their very silly video on YouTube, the aftershocks of that upload were still being felt. The local tabloids were covering their guest appearances on TV all over the world: the shops were racking up copies of a children’s picture book based on the song (see illustration above). And that’s before we get to I kveld med Ylvis (Tonight with Ylvis), the TV show that The Fox was released specifically to promote. The chance to catch Ylvis in their home environment seemed too good to pass up, despite my hotel being too cheap to have TV Norge in its channel package, meaning I had to pay four euro for a week’s access to their online streaming service.

Nominally, I kveld med Ylvis is a chat show. Vegard and Bård sit at a desk, wonky-faced sidekick Calle Hellevang-Larsen hangs out nearby, and the three of them engage guests in conversation. But if the end-of-season clip show I watched is anything to go by, it’s rarely a straightforward interview. There may be unexpected interruptions, like a sudden explosion on set or some sort of physical stunt. Or it could be something as delightful as the appearance of singer Maria Mena, who was asked to take the dancefloor banger Afterski and, well, John Lewis it up a bit.

But then there are all the bits that take place away from the studio. There are filmed sketches, such as a variant on the old improv comedy staple of one performer taking over the hands of another. There are hidden camera pranks, which tend to avoid humiliating the general public in favour of whimsically confusing them instead. You’ve probably noticed by now that as a direct result of their global fame, many of the Ylvis clips on YouTube now have English subtitles, either officially added by TV Norge or unofficially added by fans.  For someone watching these sketches unsubtitled on TV, the visual humour makes them more immediately accessible than the chat show segments, but there’s no denying they’re a bit broad.

The musical numbers, however, are a different story. For one thing, they all tend to be in English: for another, there’s definite musical talent hiding behind the silliness. The Cabin and Massachusetts (both featured in the clip show) are more representative of Ylvis’ musical output than their megahit, in that they sound like proper songs until you concentrate on the lyrics. There’s a danger that once the fuss dies down, Ylvis will drop back to Psy-like levels of obscurity in the non-Norwegian parts of the globe. I hope that doesn’t happen – their songs are great, and they’ve got enough international savvy to take their schtick anywhere. Well, maybe not Boston.

Meanwhile, let’s get back to the movies. Last time I was at the flicks in Oslo, it was to see Pål Sverre Hagen doing some exploring as Thor Heyerdahl in Kon-Tiki. He’s doing more of the same in his new movie Gåten Ragnarok (The Riddle Of Ragnarok), this time playing the fictional Sigurd Svendsen. He’s a sexy archaeologist who spends all his time either arguing with the bloated plutocrats that run his museum, or whizzing off around the world looking for artifacts.

When Allan (Nicolai Cleve Broch) – a man whose relationship to Svendsen is probably mentioned somewhere in the dialogue, but, well, you know – anyway, when Allan calls by one night carrying a runestone, Svendsen realises that it’s a key to the location of possible Viking treasure. Pausing only to collect his two kids – for the tenuous reason that their mother is dead – the four of them set out for the wilds of Finnmark, hooking up along the way with local climber Elisabeth. The kids look at Elisabeth and immediately start thinking ‘replacement mum’: the audience looks at actress Sofia Helin, best known for playing autistic supercop Saga Norén in TV drama The Bridge, and takes far too long to get used to the idea that her face can express actual human emotions.

The setting may be unusual, but there’s nothing particularly new about Gåten Ragnarok – the archaeologist/adventurer has become a modern cliché, from Indiana Jones to Lara Croft. Mikkel Brænne Sandemose manages to give it an unexpected spin, paradoxically by taking a very old-fashioned approach to its pacing. These days, you’d expect a story like this to hit the ground running and crank up the action more and more from there. Sandemose starts it all very low-key, to the extent that you wonder if there will be any effects work at all. But a pre-credits flashback depicting the fate of a horde of Vikings brings to mind Chekhov’s famous rule: if you introduce a giant man-eating monster in act one, you’d better be prepared to use it in act three.

The monster is a perfectly acceptable bit of CGI when it happens, but the long buildup to it is what makes the difference. There’s plenty of spookiness involving caves and skeletons, and a few splendid bits of peril that gain hugely from being largely achieved by practical means rather than pixels. It’s well performed by the leads, and even the kids manage not to be too irritating, despite having been lumbered by their dad with names like Brage and Ragnhild.

Search for clips of Gåten Ragnarok on YouTube, and you’ll find plenty of them with English subtitles: the producers have the international market firmly in their sights, with a story that could be understood and accepted the world over. Apart from the Viking trappings and the jaw-dropping scenery, there’s nothing that really marks the film out as specifically Norwegian. The other current local hit in Oslo – a comedy film about a private detective with Downs Syndrome – may prove to be a harder sell elsewhere.

Despite the film’s title, its lead character isn’t called Detective Downs: he’s Robert Bogerud (Svein André Hofsø), and he wants to fight crime just like his dad does in the police. He’s got the trenchcoat and the hat and everything. All he needs is a case, and eventually he gets one when a dame walks into his office and asks Robert to track down her missing husband. Robert’s method of detection is pretty basic: he puts himself inside the shoes (or, more accurately, hat) of the missing man and takes up residence inside the family house, much to the annoyance of everyone else. It’s probably not too much of a spoiler to say that he does get results, eventually.

Detective Downs takes its subject a lot more seriously than, say, Tom & Jimmy, while still managing to be a damn sight funnier. Reading up on the film after watching it, the key focus of the publicity is on Bogerud’s increased capacity for empathy, and how this makes him a better detective than most. Without the benefit of dialogue, though, it looks to me like he’s just mooching around the house, winding up the family until one of them cracks. They all ignore or patronise him at one point or another, but while they’re doing that they’re not noticing him doing actual detective work. He’s basically Columbo, but with more hugging.

At the same time, the film plays a queasy trick by combining the natural melancholy of the loner private detective with the sympathy we feel for someone with Downs, mixing them into a sentimental cocktail that you’re never quite sure is acceptable or not. And despite its hugely sympathetic view of its protagonist, the film still can’t resist having its baddies break out the M-word for Gervaisian shock value every so often – notice how the trailer saves the phrase “jævla mongo!” for its punchline.

That’s a very peculiar mixture of tones for a film whose primary purpose is to make people laugh: and admittedly, some of those tones were lost on me through not speaking Norwegian. (The final scene of dialogue, in particular, had the audience in stitches, and I’d be curious to find out what was going on there.) But writer/director Bård Breien’s always careful to make Bogerud a genuine character rather than a naff caricature. His not-so-secret weapon is Svein André Hofsø, whose performance is perfectly balanced throughout. As is usually the case with any detective stories I watch unsubtitled, I couldn’t tell you exactly how the mystery is resolved, but Hofsø carries an entire emotional arc on his face that keeps you watching to the end.

There’s an outside chance that Gåten Ragnarok could make it into UK cinemas, or at least onto the virtual bottom shelf of Netflix. But could Ylvis’ revelation of the Norwegian sense of humour mean that we may get Detective Downs here eventually? I’ve no idea, but here’s hoping.