Britain’s longest running and most popular LGBT film festival starts tomorrow. Emma Street gives you a quick tour of what to look out for at BFI Flare.

This Friday BFI Flare, the London LGBT Film Festival gets underway. As a festival covering all things lesbian, gay, bisexual and transgender, it has – as you might imagine – a pretty wide brief. All kinds of budgets, all kinds of genres and all kinds of countries getting some sort of representation over the festival’s eleven day running time. It’s a big old multicultural get-together is Flare and it’s nice to see Sri Lanka being represented for the first time in what’s being billed as its “ first gay film”, Frangipani.

The films are grouped into three categories, ‘Hearts’, ‘Minds’ and ‘Bodies’. The divvying up of the selected films into their respective sections seems a little arbitrary at first glance; it’s hard to think of any film made ever that doesn’t cover all three categories. I’m sure it makes perfect sense if you understand it better.

Here is a quick run-down of some of the films that look especially intriguing. 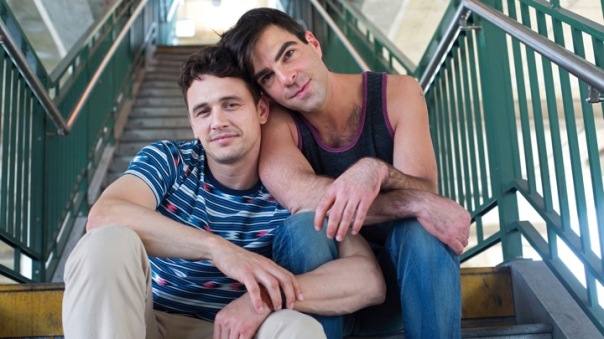 The film chosen to open the festival is Justin Kelly’s I am Michael which stars James Franco as Michael Glatze who took the unusual personal journey from outspoken pioneering gay activist to homosexuality-denouncing Christian preacher. He  turned his back on his own trailblazing publication “Young Gay America” and abandoned the boyfriend with whom he had spent the last ten years of his life.

I’ve not yet seen the film but it does seem a remarkably bleak bit of subject matter for a LGBT festival. Glatze is still alive and well and denouncing homosexuality in Wyoming. It doesn’t look like he’s planning to re-embrace being gay any time soon.

Dressed As A Girl is Colin Rothbarts’s documentary about East End Drag Queens which follows seven performers,  on and off the stage. For five years, the lives of Jonny Woo, Scottee, Pia, Amber, Holestar, John Sizzle and Ma Butcher were recorded as they lived their lives, talked about their feelings and performed at intriguing sounding events like Glastonbury Festival’s Downlow, “the world’s first travelling homo disco”. Of course beneath the wigs and glitter and six inch heels, there can be a lot of angst  – and the many problems the performers face are addressed within the film. Pia Arber, one of the film’s stars says “We’re not half-female or half-male. We are something entirely different. There is a third sex.”

The Falling, directed by Carol Morely (whose previous films include Dreams of a Life and The Alcohol Years) takes place in a girl’s school in the late 1960s. The intense friendship between two of its pupils, Abbie (Florence Pugh) and Lydia (Maisie Williams, familiar to many as Arya from Game of Thrones) becomes fractured and disjointed after Abbie has sex with Lydia’s brother. This seems to act as a catalyst for an outbreak of hysterical fainting which takes over the school. The otherworldly tone of the parts I have seen so far are truly evocative of the intense, scary and often oddly creepy world of teenage girls.

David Thorpe’s Do I Sound Gay? is such an interesting idea for a documentary and if the trailer and clips I’ve seen from it are anything to go by, it looks like it will be really funny as well. I am so looking forward to watching this in its entirety. Thorpe thinks his voice sounds unmasculine. “Sometimes I feel really self-conscious about sounding gay,” he says.  And the thing is, you know exactly what he’s talking about. There definitely is a ‘gay’ voice. I’d always assumed that people who sound like Jack out of ‘Will & Grace’ sound that way because they choose to, so the idea that some gay men might be unhappy with their voices was a real eye-opener.  “For many gay men that’s the last vestige of internalised homophobia – the hatred of how they sound.” Thorpe enlists the help of numerous gay men including a few celebrities – David Sedaris, Dan Savage and George Takei – to look at the issues around masculinity and gay culture and to answer Thorpe’s question: Do I Sound Gay? (Answer: yeah, he pretty much does.)

George Takei is clearly all over this festival (as well he should be). He also put in an appearance in Jeffrey Schwarz’s Tab Hunter Confidential. Although in the case of this documentary about the Hollywood golden boy and closeted gay actor, it would probably be quicker to list celebrities who don’t put in appearances as talking heads here. Clint Eastwood, Noah Wyle, Debbie Reynolds, Robert Wagner and John Waters are among dozens to chip in and talk about the impossibility of a chisel-jawed heartthrob like Hunter being able to come out as a gay man in the 1950s. Even now, it doesn’t seem to be something that Hunter is all that comfortable about sharing, although his willingness to discuss his career with Schwarz shows that he has willingly left the closet behind him. Although, I guess when you have spent so much of your life living a lie, that lie ends up feeling more natural than the truth.

As well as all the shiny new films, there are a selection of classic films with varying levels of LGBTness.  These include Orlando, The Color Purple, Strangers on a Train and Fried Green Tomatoes at the Whistle Stop Cafe.  Fried Green Tomatoes, really? Actually, according to the Flare literature, a lot of the more lesbian elements were lost in the transition of Fannie Flagg’s book to screen. “This was a mainstream Hollywood film in the early 90s so explicit lesbianism was never on the cards”. Fair enough, then. Although, there’s also a Xena: Warrior Princess event on Saturday so I guess the organisers are happy to include stuff that might not be exactly lesbian but certainly gave off all the right vibes.

And a classic which has all the right LGBT credentials is 1975’s Rocky Horror Picture Show. Also being screened is the lesser known  sort-of-sequel Shock Treatment. Richard O’Brien claimed on its release: “It’s not a sequel… it’s not a prequel… it’s an equal.”  I think time rather proved you wrong on that score, Rich.  In Shock Treatment, Rocky Horror’s Brad and Janet become part of a huge reality television experiment which does seem an impressively modern plotline for a film released in 1981. And there are songs! Of course, there are.

This is just the tiniest tip of the films being shown at this year’s BFI Flare festival. There are over a hundred films on offer. I was going to add  ‘covering every aspect of LBGT life’ but then I thought about it and realised that that would be a silly thing to say and an impossibly big ask. There’s a hell a lot of variety none-the-less, with serious documentaries, whimsical short films, dramas, biopics and comedies. And one short film about a woman who sees the face of Christ on a man’s swimming trunks. Which let’s face it, may be just about the perfect pitch for a film.

For more information about the festival and the films being screened, check out BFI Flare. Many of the screenings have already sold out but if there are still plenty to be had if you’re fast and lucky and flexible and openminded.  Which are desirable attributes in most situations in life, I find.