It’s 50 years since Darling came out, and it’s getting a new Blu-ray and DVD release. Kate le Vann visits London in 1965 but remains coolly indifferent. 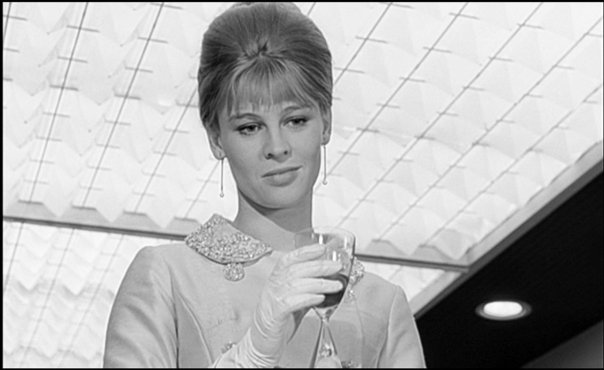 “A little predatory beast who claws her way through four men and ruins them, finally ending up as an Italian contessa and is ruined in turn.” The plot of Darling, according to Dirk Bogarde. Yes, well. I think it’s true that everyone who was involved in making Darling thought of it this way, including Julie Christie herself. She fucks it up, basically. She can’t flatten herself into the character written on the page. I’m reminded of Rachel Weisz in The Shape of Things – I once argued with a friend about the Weisz character’s motivation (she breaks a man’s heart for an art project), then looked stupid when Neil LaBute confirmed in an interview that the character was cold and compassionless. But Weisz’s eyes burn with back story throughout, there’s more going on than she’s allowed to say. Sometimes a great actress will ruin a shallow character by holding her head under water.

No one asks Diana Scott, model/actress/It Girl, why she wants to get to the top, or even what she wants to get to the top of. Money, a part in a movie, flash boyfriends, sex – she doesn’t appear to get any pleasure from any of these. The closest thing to a motive appears when Diana runs away from London to her sister’s house in the country, and is so horrified by the atrophy of provincial middle class existence that she runs straight back. I bet Darling fans would tell me that Diana’s enigmatic life plan is the whole point, part of the satire on her vapid world, but that’s exactly where Christie gets in the way. She is unambiguously unaffected by her triumphs and conquests, but she can’t turn off her own light. Her voice is full of nuance and understanding; her strangely plain smile always seems rather disgusted by the power of her beauty (and on holiday with gay Italian boys, she rolls her eyes at their vanity — she has none). She’s so clever and interesting, and interested. She’s kind (sincerely) to an elderly writer, and he gives her a little drawing as a keepsake – there’s no suggestion that it’s worth anything, but she really loves it. Alone with her louche boss, Laurence Harvey, she’s the one making playful conversation, as if she’s the one who has to try. It’s absurd that she wouldn’t find another place to have fun. It’s the Swinging Sixties, so why is she always at the wrong parties? Why isn’t she hanging out with the Beatles or trying to date Terence Stamp? It makes no sense that she isn’t Julie Christie… when she’s Julie Christie.

Darling’s London isn’t swinging. It’s no Smashing Time. It’s full of old people, the establishment fortifying their racist, sexist, paedophilic redoubt. She has to go to Paris to find a sex party, and it’s a really ropey one (hey, perhaps some sex parties aren’t!) that quickly descends into that bit in Big Brother where they make housemates do impressions of each other, knowing it’s the quickest route to resentment. It works here, too… except nothing’s at stake. Diana is at the party with a man she doesn’t love or enjoy spending time with, chasing after contracts she doesn’t want that he would give her anyway (when she’s not around, everyone in every room talks non-stop about her perfection and uniqueness).

It’s often said of the film that it has aged badly and dated, but I’m not convinced this is why it doesn’t work. Even closer to the time, the Darling team seemed unsure of how well they were doing. Dirk Bogarde criticised his own performance, Frederic Raphael, who won an Oscar for the screenplay, said some of Bogarde’s scenes had been cut because “they were flirty. He wasn’t awfully good at flirty.” Well, he damn well needs to be good at “flirty”, because Julie Christie is, and we’re told at the end that he was the only man she ever loved. The plot to me comes across as a long whiny monologue by a man whose pride has been wounded by a girl who wasn’t that into him. It’s a ‘that bitch’ story. She was out for what she could get. She left me because she was a whore. She didn’t even like sex. She told the other men that I was the only one she ever loved. She aborted my baby. (Lack of maternal instinct was often used in the 60s to prove a woman had no heart, as with Charlotte Rampling in Georgy Girl, pristine and smoking a fag in hospital while at the foot of the bed her newborn screams for her.) She let her goldfish die! And when I finally grew the balls to reject her she became unhinged, threatened to kill herself. Well I hope she’s happy now. Heh heh heh. 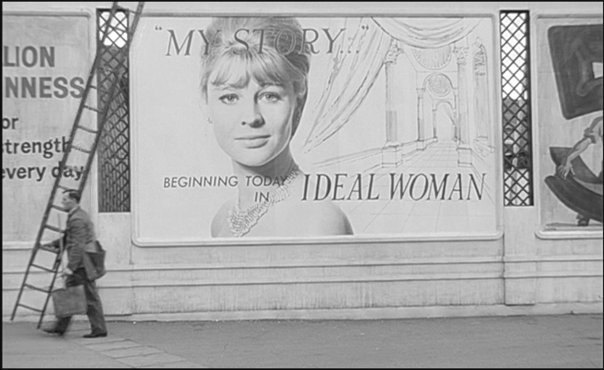 But I just think yeah, he wishes. But then I also don’t know what she wants.

This is what I liked. Darling does a good job of reflecting the shallowness and quietness of the high life, that in the end, after the parties and the seduction, it always ends up just you and some bloke in a room, your ears ringing from the sudden absence of loud music. Alone together. Filling the gaps.

And Schlesinger started out as a director of documentaries and his eye for the random beauty of real life is a strength throughout. I really enjoyed watching Julie Christie stalk around her Italian palace throwing off heavy silk brocades like the heroine of Wraggle Taggle Gypsies,but in church, the only young woman in a quilt of catholic grandmothers, hers is not the only lovely face. There’s no pity or disgust for ageing flesh in Schlesinger’s eyes.

There’s not much else to it. She’s Alfie before Alfie – a heartless hottie sleeps around until someone says: no more. But Alfie’s women touch us and Diana’s men don’t. No one really gets hurt. Dirk Bogarde leaves his wife and children but the scene doesn’t make it into the story, and later we’re told that his wife has moved on quite happily. Diana has her implausible hysterical outburst when she’s finally decided to settle down and is rejected, but she would never have settled down because Robert was never what she wanted. If he had been, she’d have liked it at the time. Robert chooses vengeance and self-righteousness over breakfasts in bed with Julie Christie and you get the impression it’s a choice he won’t spend much time regretting. I don’t think Diana will spend much time regretting it either. It’s hard to say. She’s deep.