Damien Chazelle’s La La Land has already made a splash at cinemas and on the awards circuit. Mostly Film’s resident grumpy jazzers, Martin and Sarah Slade, review the music, while self-confessed musical and Ryan Gosling aficionado Fiona Pleasance offers some thoughts on the film. Readers, be warned: mild SPOILERS follow.

Sarah: The story of La La Land is the story of a love affair between a grumpy jazz bore and an actress at the beginning of her career. Here are the things I liked. Emma Stone was luminous, charismatic, charming, deep, and wonderful. Ryan Gosling was just lovely and funny and did a fine job on the piano playing. The look of the film was glorious and I loved all the little nods to classic musicals of yore. The dance sequence filmed at magic hour was magical.

Here’s the thing I didn’t like. The jazz. Or rather, the treatment of jazz.

Martin: In musicals of old the leads were ok actors, but primarily chosen for singing or dancing – or both. These leads were compelling actors, particularly Emma Stone, but ordinary dancers and singers. I agree with you about the treatment of jazz. If they’d got that right it would have been a great film.

Sarah: A lot of the old musicals had a gang show feel about them too. I’m thinking of On The Town, where the boys meet up with sassy New York dames and have singing and dancing adventures. It would have been a different film if…oh I dunno…Harry Connick Jr. had taken the lead. And it would have had to be filmed in the 90s, when Connick was still cute. But the point is, he’s a pianist, singer and pretty fine actor with a background in jazz, and I think a jazz musician might have challenged the portrayal of jazz in this movie. For me it was just a series of name drops and a bit of noodling around a vaguely boppish theme.

Martin: On the plus side, Ryan Gosling was shown practicing without a piano when stuck in a traffic jam, and with his piano once he got home. Too many films miss out the graft involved. But the film lacked any killer tune. I kept hoping for a trip to Cuba being required and some Afro-Cuban grooves which would have helped a lot. It helped with Guys and Dolls, but then that had many killer tunes.

Sarah: I forgot pretty much every tune as soon as I left the cinema. It was a very narrow definition of jazz, wasn’t it? Very mainstream, no acknowledgement of influences from the Caribbean, or Europe, nothing after 1955, a grudging nod to R&B when John Legend’s character insisted that jazz had to move out of the past to survive. But it was almost as if they couldn’t be bothered to do the listening, so they pumped out the standard Armstrong/Bechet/Parker/Miles trajectory and decided the audience couldn’t cope with anything more complex. Not even a little weeny bit of funk….

I agree with you about showing the process. I liked that we saw Mia practicing her lines before she auditioned and Seb practiced with the record player – though I’m surprised nobody had told him about that slow downer app or iReal Books. That’s another thing, jazzers keep everything on their iPads these days, but then Seb felt that he was ‘keeping it real’ by scratching up a nice bit of vinyl.

There was plenty to love about this film. The photography and staging were great, the actors were really really good. Swing dance fans will note a good bit of lindy hopping going on in the background at the Hollywood Cafe. But for all Seb’s protestations, it wasn’t jazz. 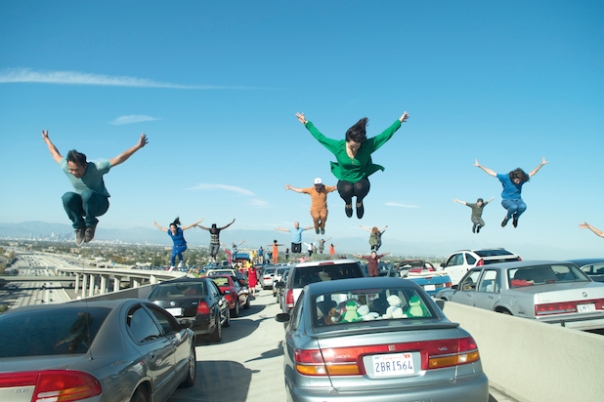 It’s a familiar trajectory. When a film has been awaited so long and so eagerly and expectations are high, when the initial buzz is overwhelmingly positive, and when the awards start coming in, there’s almost bound to be a backlash. So it proves with La La Land, out in UK cinemas for just one week but already praised and dissed in equal measure. It’s not as if this wasn’t predictable. If there’s any type of movie people tend to either love or hate, it’s the musical.

It may sound a bit obvious, but I think the key to understanding La La Land is that it is a musical, and that this is not only the film’s genre but its entire reason for being. It’s not only that the movie is chock full of references to classic films, from the delaying of the kiss (as found in most of the Astaire and Rogers movies) to the style used for the musical sequences: long takes, mobile camera, full body shots, minimal editing. It is also that, in my opinion, La La Land is so far the only film in recent years which not only understands the role of the song and dance sequences in classical Hollywood musicals but uses them in the same way. They are less about driving the narrative and more of revelling in the simple pleasure of watching beautiful people do beautiful things. The songs and the dance sequences are confessions of secrets, expressions of joy, or declarations of love.

In his review of the film for the Guardian, Peter Bradshaw sees fit to mention that we don’t ever see the couple having sex. Of course we don’t! We never catch the couples in classic musicals having sex either, but we do see them singing and dancing together. That’s how we know Fred and Ginger are made for each other, regardless of the plot’s complex misunderstandings. The minute Ryan and Emma take a whirl, despite all the meet-cutes and brush-offs, we know they are destined to be a couple – and so do they. The joy of the film is in watching it all play out.

This is, and always has been, key to the musical’s emotional engagement; nowhere else in film do we see feelings expressed in this manner. So audiences who connect with what is being shown – and that certainly doesn’t apply to everybody – can find themselves affected accordingly.

Of all the classical Hollywood genres, the musical has always been most closely positioned to art cinema on the mainstream-to-arthouse sliding scale. Most Hollywood films take great pains to reassure us that they’re not really films, and conventions like continuity editing and classical storytelling developed so that viewers wouldn’t notice that they were watching something fake and constructed.

But by their very nature, film musicals are always pointing out that they’re movies. For most of us, the orchestra does not start to play while we are walking down the street, more’s the pity, and we do not often act on the urge to start singing and dancing as the mood takes us.

La La Land takes the fact that the musical constantly threatens to break the fourth wall and revels in it. So the colour palette is eye-poppingly bright, from the costumes to the sets. When someone starts to sing or play, the lighting often changes, background darkening, spotlight on the actor. We have montage and fantasy sequences that look as though they’ve come from a picture book. La La Land may be the most in-your-face art film to obtain a widespread release for many a year.

So what better genre could there be to discuss themes such as fantasy vs. reality; or the costs of being true to yourself against the grind of day-to-day existence? Where else but LA would you find characters whose dreams of stardom are so coloured by the past, not just their own but the cinematic past? The world in which the movie takes place is already so make-believe that the idea of ‘realism’ no longer applies; it is the Dream Factory after all. It makes the choice between two fantasy scenarios – instant fame and fortune or meeting and keeping the love of your life – seem almost natural. And even if the characters take one path, the film can still show us (and clearly prefers) how things might have panned out had they taken the other. 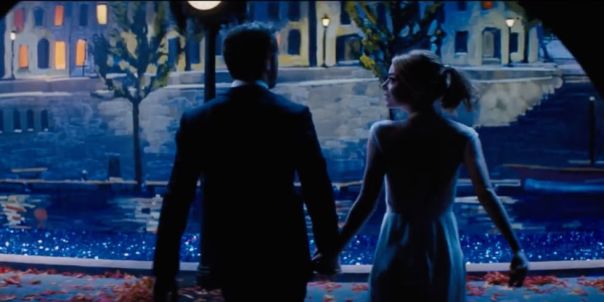 The approach taken by La La Land differs from the classic movie musical in only one significant respect, and, interestingly, it also has to do with ideas of authenticity vs. artificiality. In classical Hollywood, you had dancers who could dance, singers who could sing, and a few unique specimens who could do both well. Singers who couldn’t really dance were compensated for, and dancers who couldn’t sing were dubbed, simple as that. It was just the convention and, at the time, audiences barely noticed.

But nowadays, this would be considered a readjustment too far, and so in keeping with films from Everybody Says I Love You and Mamma Mia to Les Miserables, it is the real Emma Stone and Ryan Gosling who sing and dance. How you respond may depend on what you expect from your stars and their songs and dancing; if you would like certain standards to be met and they are not, you might be justified in pointing out some weaknesses in both departments. On the other hand, the gain in emotional directness arguably enhances the film and the acting enough to compensate. Again, it’s up to you.

In my introduction to our classic musicals piece on this very website last summer, I ended by hoping for two things from La La Land. The first was that it should lead to more contemporary musicals, but to be honest, I’d be very surprised if that happens. To me, the film feels like a lightning-in-a-bottle moment and an absolute one-off, and I’d be amazed if any imitators matched it. (It may well be that the industry recognises this and refrains, in the way that the success of The Artist did not lead to a slew of black and white silent movies).

My other wish was that the film should transport me, the way that all good musicals do. And really, it absolutely did, and even more than I had dared hope for.