In Feminine Iconology Revisted Part One, MostlyFilm brought you the icons of the silver screen from the Golden Age: one writer, one actress, one decade. In Part Two we moved through Hollywood’s 1970s renaissance to the present day. 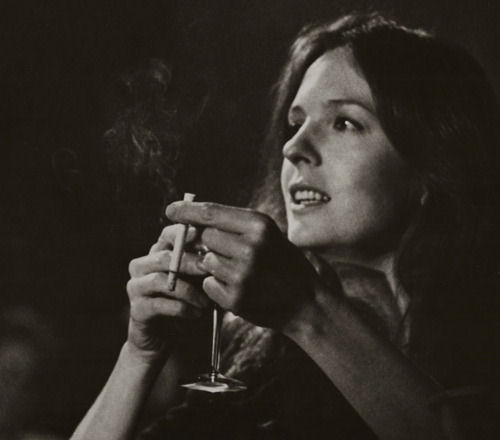 The 1970s was Hollywood’s second golden age. Mainstream cinema got edgier and artier with a new breed of filmmakers striving for a fresh, low-key naturalism and openness that had not been depicted before; filmmakers like Francis Ford Coppola and Woody Allen. Think of Diane Keaton and you think of Woody’s Annie Hall. The baggy pants, waistcoats and men’s ties, the big floppy hats and long, swinging hair, all spawned a look you can still find traces of in any student bar today.

Then there is the manner — awkward, nervy, naive. She bites her lip and twists her fingers, jams her hands in her trouser pockets while her sentences trail off into nothingness. One of the great comic heroines she may be, but there are no zingers for Annie. She says ‘lah-di-dah’ because she can’t think of anything else to say. We don’t know how much of Keaton is in Hall, how much of Hall in Keaton (the name is significant, she was born Diane Hall), but even beyond Allen’s world of nail-biting and neuroses there was always an awkwardness to her.

The Godfather gave Diane Keaton her other great role of the 70s. Kay Adams, the school teacher turned unwilling Mafia matriarch, is seldom at ease. In her first scene she turns up at the Corleone wedding, skinny and, like Annie Hall, somewhat taller than her boyfriend. Side-lined at a table away from the main celebrations she’s a pale Anglo-Saxon among dark-eyed Italians, and, again like Annie Hall, another rube.

There’s no glamour to Diane Keaton. No poise. Even when she’s not playing a gawky interloper she’s a game girl, the comic sidekick in Woody Allen’s early funny films, giving it a go on the Orgasmatron. And yes, she’s pretty, but it’s in a girl-next-door sort of way, not the unassailable, impossible beauty of Grace Kelly or Ava Gardner. Low-key, natural, always fresh, always open: that is Diane Keaton and why she’s my pick for this decade.

Ah, the ’80s – a decade of decadence, of gold-plated platters piled high with cocaine. A time of excess, in which shallowness and superficiality trumped peace and love, when money and power was King, when Greed was Good.

Michelle Pfeiffer was this decade’s go-to girl, representing in many of her films the top of the heap, the holy grail of what it meant to be successful in 1980s America. In 1983’s Scarface, her character Elvira utterly embodies the American dream, her glacial Caucasian beauty represeting nothing less than the free world to Tony Montana, in a film which documents his journey from Cuba to the heights of kingpin in America. Elvira ends the film addicted to drugs and money, both of which have destroyed her.

In 1987, Pfeiffer starred in the Witches of Eastwick, a film in which she sells out to Satan in a very literal manner, while 1988 sees her in Dangerous Liaisons – a very 1980s period piece, examining greed and immorality, and the manipulation of desire for sport. It’s worth noting that in this film Pfeiffer’s character is again a pawn on a chess board, who when attained will represent the winning of the game.

Tequila Sunrise (1988) has Pfeiffer playing yet another variation on the same theme, portraying a woman the two lead men need to secure in order to assert their masculine ‘success’ to themselves, and each other. In the films of the ’80s, Pfeiffer is reduced to a possession; in these hymns to consumerism, she is the ultimate status symbol onto which the males – and the viewer – can project their own fantasies.

The Fabulous Baker Boys, Pfeiffer’s last film of the 1980s, exposes the precariousness of the consumer decade. Pfeiffer plays Susie Diamond, a down on her luck prostitute turned lounge singer. The character is damaged by the desires of men and the capitalist era she bought into, but ultimately renounces the values of the decade by seeking redemption in the formation of more authentic relationships. 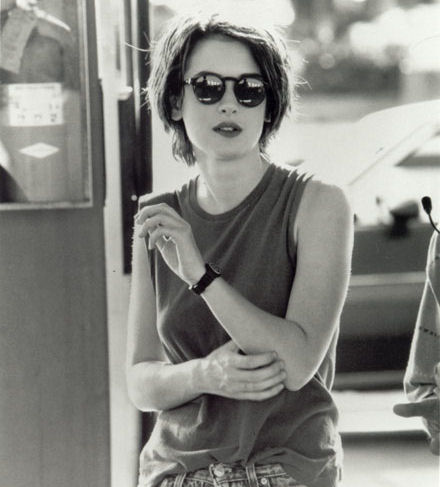 When I think of the 90s I think of Winona Ryder. Poster child for the rise of grunge and go-to girl for alienated, outsider characters, her quite frankly enormous eyes seemed to be everywhere during my youth.

Hitting her stride early on in Beetlejuice and Heathers (a film she was warned not to take as it would ruin her career) by the time the 90s rolled around she was the perfect choice for the beautiful, quirky characters she embodied in Edward Scissorhands and Mermaids, characters who seemed at once fragile, innocent and with one hell of a stubborn streak.

This stubbornness did not dissipate with her shift into period dramas (The Age of Innocence, Little Women), probably her most critically successful period which culminated in two Oscar nominations. Ryder displayed her ability to minimise her modernity and wield a corset with all the wit and, dare I say it, feminism, of the best in that field.

Despite her success it is interesting that, in the decade that truly embedded the Summer Blockbuster as a genre in its own right, she only took part in one such venture; Alien:Resurrection. Even this was more of an art-house take on the genre and Ryder herself has since admitted that she didn’t belong.

But still, a highly sought-after, publicly endorsed movie star, Ryder always came across as smart, savvy and brave in her choices. She worked with art-house directors and up-and-comers (Jim Jarmusch, Ben Stiller) while maintaining her work in more traditional fare (The Crucible). Considered for a number of high-profile roles (she pulled out of The Godfather, Part III due to exhaustion. Perhaps we have her to thank for Sofia Coppola’s far more stellar behind-camera career?), she was one of the most popular actresses of the decade.

Kara blogs at Stranger Than Flicktion and tweets as Flicktion.

So that Halle Berry, eh? She’s a woman of two halves and no mistake! If she’s not unsportingly knocking down pedestrians and driving away (probably shouting “STRIKE!” as she disappears over the horizon), then she is being the epitome of a good sport and picking up her Razzie for services to Catwomen everywhere.

Halle Berry is an actress of contrasts – an Oscar winner who, despite having a violently emotional first meeting with the little gold fellow, is still best known for her role in a comic book adaptation.

She makes intriguing choices. She chooses to appear in award-baiting films – films full of controversy, debate and politics (Monster’s Ball, Frankie and Alice). And then, without so much as a by-your-leave, off she goes to star in shallow-as-a-puddle frothathons, containing little more than her bootylicious body.

Nakedness is a recurring theme for Halle Berry. While wanting to be taken seriously, and having the ability to be taken seriously, she has not shirked from taking exploitative roles to heighten her profile. This pattern repeats, albeit without the Oscar, for so many young actresses (and to a lesser extent, actors) in today’s Hollywood, that it is quite dispiriting. Kit off, or **** off, there’s another hopeful in the queue behind you. The rolling abundance of feminine nudity in modern film can depress while it titillates (these girls are beautiful, even while the system is chewing them up).

Halle Berry bestrode the 00s. Her era – the one where she really hit her stride – was the 00s. She was ever-present. Films, newspapers, magazines, Revlon advertisements. Notice however, ‘was’, because since 2010 neither hide nor hair has been seen of her. Where has she gone? Has she gone on holiday? Should pedestrians be stocking up on protective armour? Run, fellow pavement skittles! It’s the Berrymobile!

The cute little girl from ET was known best in the early 90’s as an example of how corrupting childhood fame could be. Drink and drug addiction, a failed marriage and all before she reached 20, Drew seemed destined to carry on the self-destructive legacy of the Barrymore dynasty.

But somehow Drew came back from this, stayed sober and worked her arse off to get to the top and stay there. In the 90’s bit parts were followed by the film stealing cameo of a decade in 1996’s Scream. Scream suggested the screw up could be a starlet and as Julia, bringing some much needed genuine sweetness Adam Sandler’s The Wedding Singer, Drew became just that.

In 2000 Charlie’s Angels blasted its way into mulitplexes. The project sounded like a disaster – a big budget Hollywood version of a light weight 70s TV show best remembered for the female star’s hair styles. Instead, the mixture of humour, girl power, action and female friendship was irresistible and Drew cast herself in the pivotal role of Dylan, playing a sweet bad arse alongside prim but fun Lucy Liu and ditzy but hard as nails Cameron Diaz. Drew had, in Hollywood terms, arrived and she had no intention of leaving.

She didn’t just look beautiful, pout at cameras, wear designer dresses well and have a soap opera romantic life that the gossip rags and their readers couldn’t resist; more than that, she was a career girl. After producing and starring in massive hit Charlie’s Angels, Drew helped to produce and took a small role in a little indie movie that became an instant cult smash – Donnie Darko. For this combination alone I defy anyone not to respect the woman.

Over the course of the rest of the decade she continued to mix it up – the excellent Confessions of a Dangerous Mind, the not so great Riding In Cars with Boys, the inevitable Charlie’s Angels sequel, the much anticipated second pairing with Sandler – the equally charming 50 First Dates – and to wrap the decade up her directorial debut, Whip It, about a misfit female and a roller derby league.

Drew Barrymore spent the decade acting, directing and producing a variety of films that spanned indie and big budget. She brought us Charlie’s Angels. She brought us Donnie Darko. She brought sweetness to Adam Sandler movies. Heck, she brought us Destiny’s Child. And she managed all of it with good humour, a smile and kooky good looks. Drew, I salute you.