In this instalment of our occasional series on cinematic gems hiding out on the Internet, theTramp begs you to consider 2013’s Austenland. 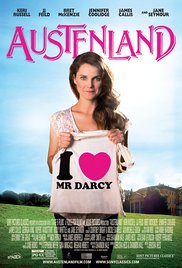 Austenland (2013) is one of those blink-and-you-could-so-easily-miss-it movies that streaming services like Netflix and Amazon are full of.  In point of fact it is Netflix that offers Austenland, and as Netflix fails to offer trailers (just a ‘jacket’ image and truncated blurb), there is little on display here to entice the casual scroller. But I am an Austen fan, and the title did intrigue me, so I did what any committed internet streamer does. I headed to Youtube.

“What separates the casual Jane Austen fan from the aficionado? The number of times she’s read Jane Austen’s novels?  Or her consuming love for Mr Darcy?” asks Jane Seymour in full regency garb. Seymour is the proprietor of Austenland, the World’s only immersive Austen experience. And with this I was in.

So what’s it all about?

Jane Hayes, played by Keri Russell (best known for her role in The Americans), is a 30-something whose obsession with Pride and Prejudice (and Colin Firth as Mr Darcy) is ruining her love life. Her job is dead-end, her boss a lech, and her best friend is exasperated. Realising that the time has come to make a change, Jane cashes in her life savings for a chance to live her obsession at Austenland, and with that last hurrah, finally kick her life-impacting Austen obsession into touch for good.

As a rom-com fan I oft lament the lack of decent offerings in recent years and yet I do keep stumbling over gems I had never previously heard of on either Amazon or Netflix. Austenland is, I promise you, one of them.

The rom is supplied here by a rather clever steal from Pride and Prejudice, with JJ Feild playing Mr Nobley (a play on noble or nob or perhaps both, you decide) and Brett McKenzie (yes, he of Flight of the Conchords) playing  Martin, the odd job chap. The steal, if you haven’t already guessed, is that one of these characters is based on Darcy and the other on Wickham, and both have their eye on Jane.

The com is supplied by a combination of a play on manners and culture, the ridiculousness of the situation – namely women clients wooed by actors within an entirely fictional world and taking it all far too seriously – and the always excellent Jennifer Coolidge as Miss Elizabeth Charming. Think Lost in Austen meets Dirty Dancing played for laughs by Christopher Guest’s company of actors and you’re close.

There is nothing starry about Austenland. The cast are all mostly recognisable from TV – the doctor from the Battlestar Gallactica reboot, the bloke from Hollyoaks who’s now in American Gods, the woman from The Americans, the guy from Conchords, Dr Quinn Medicine Woman! But the cast is rather charming and the script is smart. The humour manages to stride between broad and bawd and something rather subtler and sweeter. The ending may be obvious and the twist more so, but so what? This is a P&P reboot, you know the story already. The fun is in the journey.

It is easy to imagine this film with a starrier cast and a nice fat box office, but that somewhat misses the point. It is small, it is showing the limitations of its low budget, but it is charming and in my world charming counts for a lot.